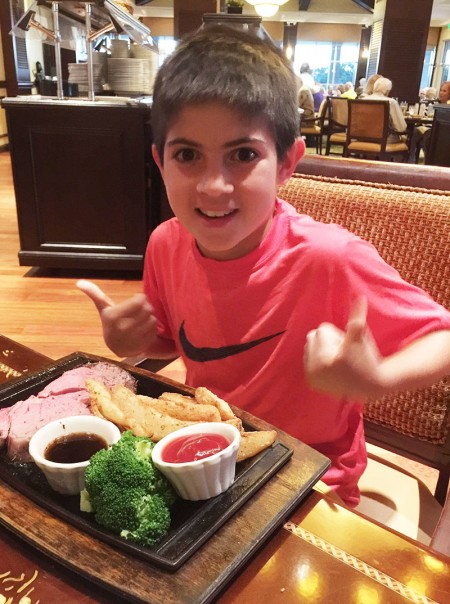 Nine-year-old Jason Shwartz is on the hunt for the country's best steak. He's tried all the steakhouses in Houston and many others during vacations with his family.

Nine-year-old Jason Shwartz is on a mission. It’s not the kind of mission that typically comes to mind when you think “9-year-old boy.” Rather, it’s a mission to find the best food in the country. Specifically, the best steak.

“It started when we were on vacation,” Jason’s mom Risa, a business performance consultant, says. “I just gave him a little piece of steak, and I made a bet with him that he wouldn’t eat it.” That’s because up until then, Jason would only eat prime rib. No steak. But, unbeknownst to Jason, he tried the steak. “He said it was the best thing he’d ever had. Ever since then he’s been on the hunt.”

Jason, who is also a serious golfer, never misses the opportunity to visit a steakhouse with his family. “I’ve been to Ruth’s Chris, Pappas, Killen’s, Fleming’s, Vic &  Anthony’s, places in New York. Wherever we go, we go for steak,” he says.

“It’s his happy food,” his mom says. And he remembers every steak. “Killen’s is really flavory. I like how Fogo de Chão cuts the steak right in front of you, and it’s really, really good. I like how River Palm [in New Jersey] is really big and juicy.”

Jason’s tastes extend beyond the carnivorous to a wide range of foods, his favorite being pasta. “I like it at Napoli, and I like homemade pasta from my mom,” he says. “She makes pasta and steak mixed together!”

So specific are his tastes that Napoli has a “hidden menu item” called Jason’s Special. “It’s rigatoni with a plain chicken cutlet and mozzarella cheese on the side,” he says. “It’s not on the menu, but if you ask it’s in the computer.” 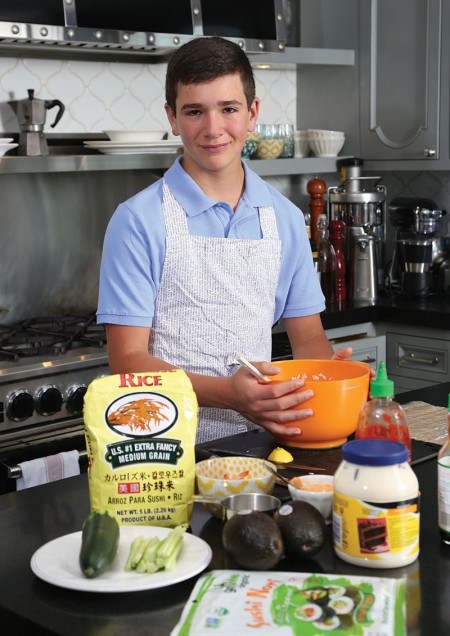 Twelve-year-old Jack Klosek not only loves to eat sushi; he loves to make it at home. He’s read cookbooks by all the great sushi chefs. (Photo: lawellphoto.com)

At 12 years old, Jack Klosek is also a veteran restaurant-goer. But while he says Pappas Bros. Steakhouse is “always a favorite,” his preferences run a bit more exotic. “There’s a little Thai place near U of H [Kanomwan] where the food is just so good,” he says. “My favorite thing is the coconut soup with chicken that is just seasoned to perfection.” Recently, his family dined at RDG Bar Annie. Jack perused the menu and chose the pheasant because that was something he’d never tried. He loved it.

Jack, who is in sixth grade at The Kinkaid School, recently celebrated his 12th birthday over sushi with friends. “Most of my friends keep an open mind about it,” he says of his sophisticated taste in food. “Nobody busts my chops, and some people actually think it’s cool.” When asked about his favorite sushi, Jack says, “I like toro, which is the belly of the tuna. It’s a very creamy, melt-in-your-mouth piece of fish. At MF Sushi [his favorite in Houston], I like everything from a seared hamachi with truffle and a lemon slice on top to Wagyu with Dijon mustard and caviar.”

Jack Klosek is 12 years old and a self-described "foodie." Listen as he talks about his favorite foods, including sushi - both homemade and from restaurants. (Video: Dylan Aguilar)

Jack’s mom Tama, an attorney, says, “He is super into food, super into cooking. He loves sushi so much he would eat it every day if we let him.” His passion runs deep: Jack’s bedside table holds stacks of cookbooks “by every master sushi chef in the world. At one point,” Tama says, “I took them away because I wanted him to read other things.”

The Kloseks’ philosophy has always been to expose their children to good food. “Why assume they’ll only eat mac and cheese? Why not fettuccini alfredo?

“John has such a passion for food that every meal he eats is like his last,” Tama says of her husband, Jack’s father. The passion came from John’s upbringing in an Italian home where his mother made good food an important part of their lives, a common thread for children growing up with a respect for – and a willingness to try – different foods. 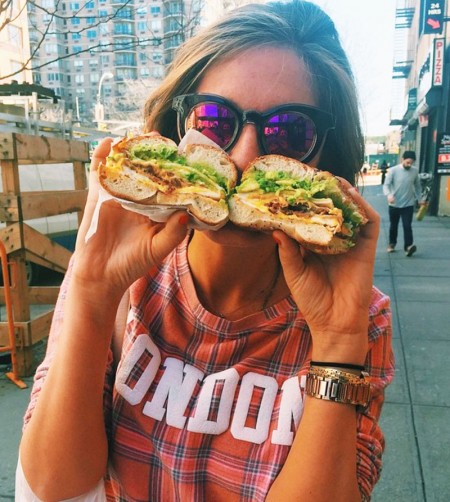 “I’ve always been into food. My mom [Tali]  is the best cook alive,” says recent college graduate Kelli Blumrosen. Growing up, she says, “My mom always had something new on the menu.” Recently, Kelli turned her lifelong love of food into an Instagram account – @Austinmymouth – with 25,000 followers checking out photos of whatever new dish she’s trying.

While Kelli does have a full-time job in Austin, she calls @Austinmymouth “a fun outlet. I appreciate good food, presentation, the work that goes into it.” Austin restaurants now regularly ask Kelli to come in to try new menu items, hoping to get a post on @Austinmymouth.

One thing Jason, Jack and Kelli share in common: parents who, from the very beginning, offered sushi and steak over pizza and chicken nuggets. “Kids can do anything and eat anything,” Tama says. “We just have to show them the possibilities.”