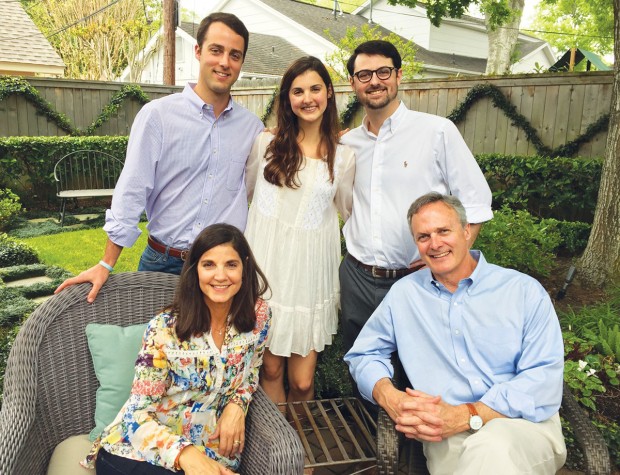 Claire Frazier and her husband Joe celebrate Claire being cancer-free, along with their children, (from left) Robert, Annie and Stephen.

Mondays meant chemotherapy. And for Claire Frazier, undergoing treatment for breast cancer, that was okay. Because if she got chemo on Mondays, Claire would feel just well enough to sing on Sundays. And she never wanted to miss a Sunday.

“I pray through music,” says Claire, a vivacious Southgate resident. “Singing has always been my way to connect with God. To sing great hymns about healing, hope and strength while going through treatment – it helped me tremendously. When you are going through cancer treatment you just want things to be normal. You lose your hair; that’s not normal. I wanted to sing in the church and be normal. I sang all the way through my diagnosis. I did not miss a beat.”

Now, eight and one-half years later, after surgery, chemotherapy, radiation and a targeted immunotherapy drug, Claire is cancer-free and still singing – in the choir and God’s praises alike.

For Claire, music and prayer have always been inextricably entwined. She started singing in elementary school, earned undergraduate and graduate degrees in music and voice and has sung everywhere from The Houston Grand Opera to the Gilbert and Sullivan Society.

Going from diagnosis to treatment to today is a path that Claire says had the duality of being difficult and blessed at the same. “I think without question I’m a more thankful person than I was before breast cancer,” says Claire, who is the resource coordinator for St. Luke’s Day School. “There were so many little miracles of timing that happened during my treatment – they left no room for doubt that God was and is in control of my life.”

Claire had no family history of breast cancer and was at first not overly concerned when she felt a lump in her breast two months after a normal mammogram in March 2007. She waited a few weeks and then went to see her OB/GYN, who pointed her towards a surgeon to have the lump removed. Her sister-in-law, Jeannie Frazier, a long-term breast-cancer survivor herself, urged Claire to get a second opinion at MD Anderson. There, doctors diagnosed her with invasive ductal carcinoma.

“Apparently it did not have the outward characteristics of a malignant tumor, but the biopsy revealed otherwise,” recalls Claire. “I was quickly plunged into the world of breast cancer. And, in the crash course that I didn’t sign up for I soon learned that breast cancer is not one – but many – different diseases with a variety of biological variances that determine treatment and prognosis.”

A self-proclaimed planner, Claire notes that she dug deep to educate herself about her particular cancer and treatment. “I had a lumpectomy in July 2007, followed by six months of chemotherapy, six weeks of radiation and nine more months of a targeted immunotherapy drug,” she recalls. “In December of 2008 I finally rang the bell at MD Anderson. It was a very long road, but in addition to being a very faithful person, having a step-by-step outline for treatment and knowing what came next was comforting.” 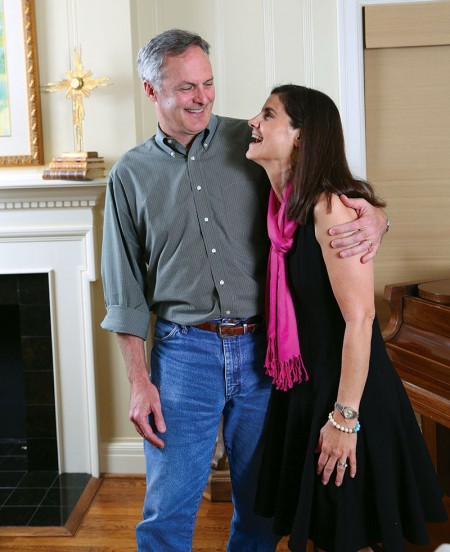 Claire credits husband Joe and children Stephen, now 26, Robert, now 24, and Annie, now 21, with helping her get through the one and one-half years of treatment.

“Annie was actually with me when I got the dreaded phone call from MD Anderson,” remembers Claire. “She was only 12, and I was careful how I translated the news to her. It was Robert’s 16th birthday, and I waited until that night to tell him and Stephen separately. I wanted them to have the space to react in their own unique way and to privately reassure them that I was not afraid but filled with hope that everything would be okay.”

That hopefulness did transcend into the perspective of her children. “I was in middle school at the time. I was pretty freaked out, but my mom was so strong and uplifting throughout the whole thing,” recalls Annie Frazier, a junior at The University of Texas at Austin. “It was definitely a season of hope and not thinking for a second that something would go wrong. My mom is literally the best and the coolest person I know. She is my best friend, and I am so thankful for her.”

The theme of hope is recurring with Claire, and she points out that being hopeful is key to getting through the diagnosis and treatment. That – and a little humor. Claire recalls singing in the Christmas program at church. “I took a bow with my wig on and was so glad that wig did not fall off!” she recalls, laughing. “I thought it was a really cute wig, but I kept thinking about what it would be like if it fell off!”

And, she adds, her husband helped tremendously. “Joe was the best medicine of all because he could always make me laugh, no matter what dreadful thing I was facing,” recalls Claire. “We’d be in the chemo ward – me with my bald head and bad attitude, barely able to keep from throwing up, and he would say something so funny that I would crack up and forget how miserable I was.”

For his part, Joe Frazier says that humor “was one of the only things I had in my tool belt” to help his wife during that trying time. “There was nothing I could really do for her since she was going through it, but I tried to keep things as normal as possible,” says Joe, who runs Frazier Exploration Partners with his brother Bob Frazier. “And I would caution other spouses like me that you have expert doctors on the case and to have every hope that things are going to be just fine.”

Additionally, Claire says the straightforward help from friends made a huge difference during her treatment. “I remember commenting to Joe that I wouldn’t wish this disease on anyone, but oh how I wish everyone could experience the outpouring of care that I did. It sustained me,” she says. 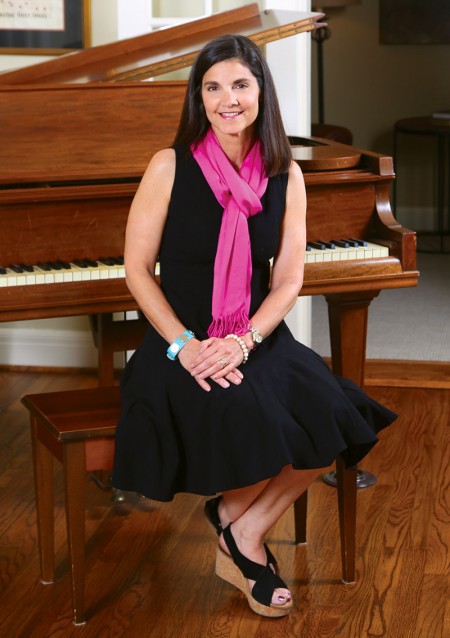 Claire found that friends and family who were proactive and honest resonated with her as a patient. “My favorite reaction was from a friend who said: ‘You have breast cancer?! That sucks!’” remembers Claire. “And she was absolutely right – it did!”

Claire notes that every act of kindness was appreciated – but she also learned what people going through do not want to hear. “By all means do not tell the person in treatment your horror stories about other friends and family who had cancer – especially the ones who didn’t survive!” she says.

Which brings her back to being a survivor. “I would repeat this verse over and over: ‘I can do all things through Christ who strengthens me.’ [Philippians 4:13] On tough days, when I was waiting for a test result or dreading the side effects of chemo that would invariably knock me out, this verse helped to calm me down and look beyond myself for comfort.” A breast cancer Bible study support group at her home, organized by sister-in-law Jeannie Frazier, also became a favorite place of respite.

“I started the group in 2000 after my treatment was all done,” says Jeannie, a Briargrove resident who is a Pink Ribbon Volunteer at MD Anderson. “That was 16 years ago, and we still meet every other Friday and we read how the Bible is encouraging and the love that come through holds you up when you are going through cancer treatment.”

For Claire, holding other people up as they go through cancer treatment has become important to her. She never misses a chance to talk to other women about the process. “The thread of receiving and giving back just feels so right for that circle to keep going,” she says.

Claire is proud to be a survivor. “The survivors are the first responders to those now going through treatment. It’s important to tell them: ‘It’s going to suck for a while, but you are going to be okay.’”

Editor’s note: Check out three more stories of life after cancer diagnosis, about Buzz residents Ashley Pratka, Stacy Middleman and Bill Gage. Plus, see a list of all of their personal resources for surviving cancer. The first Sunday in June marks National Cancer Survivors Day.