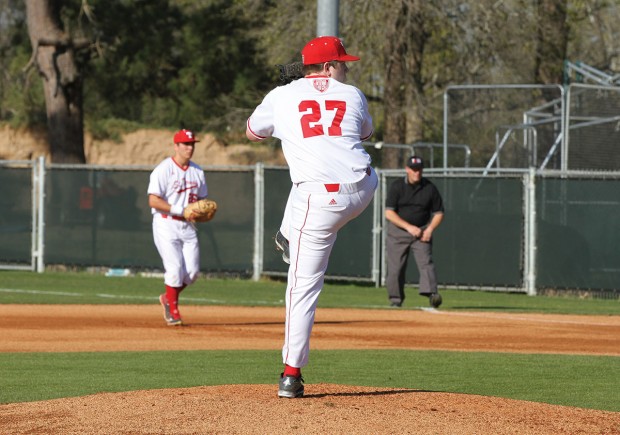 Senior left hander Cameron Cash was a dominant force on the mound for a St. Thomas Eagles team that went undefeated through its first 28 games of the regular season.

As the St. Thomas Eagles entered the TAPPS 5A baseball playoffs, they did so off the best regular-season record in school history. St. Thomas went undefeated through its first 28 games, before ending the regular season with a 28-1-1 record. The Eagles’ only defeat took place in the second-to-last game of the season.

“That kind of unbeaten streak is something you don’t ever imagine,” said Eagles head coach Ryan Lousteau. “We have a talented core of senior leaders. Obviously, you want to come out and win every game, but our winning streak was pretty incredible.”

“Our team chemistry is just amazing,” said senior pitcher Paolo Cannatella. “For us to go undefeated through the first 28 games is phenomenal.” Second baseman Alex Carnegie echoed those sentiments. “We’ve been playing together in the same baseball system for several years. We all kind of have the same mindset out there on the baseball field.”

On the mound, the Eagles boasted a dynamic duo in senior lefties Matthew Ashbaugh and Cameron Cash, who shut down one opponent after another all season long. “We’re throwing strikes, but our hitters and defense have had our backs,” said Ashbaugh. At the plate, players such as Nolan Lundholm, Philip Matulia, Owen Meaney, Brandon Campos and Carnegie carried a big stick all season long. “I’m just enjoying the ride,” added Ashbaugh. “It’s been awesome to be part of this team.” 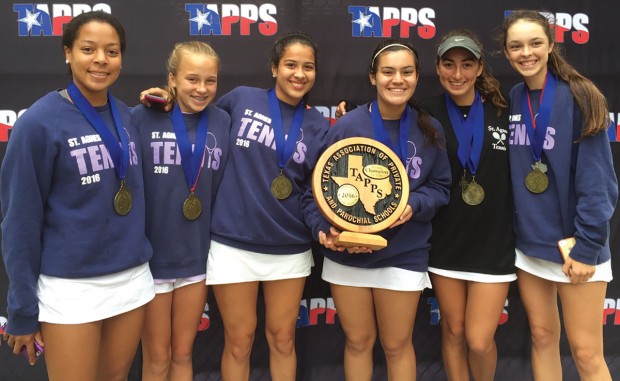 In tennis, St. Agnes Academy won a fourth consecutive TAPPS 5A State Championship, including a fourth straight individual title for Tigers senior Racquel Lyn. Lyn, who is ranked among the top 30 players nationwide in her age group, will play college tennis at Dartmouth. “She simply dominated every match this season,” said Tigers tennis coach Tom Caine. “Racquel is extremely disciplined, and she’s inspired her teammates to be their very best. “Amazingly, she hasn’t dropped a set in district or state in all four years at St. Agnes.”

At state this season, it was nearly an all-St. Agnes final in both singles and doubles. Tigers sophomore Christina Watson advanced to the state final for the second straight year before falling to Lyn in the state-championship match. On the doubles side, the Tigers duo of Taylor Ysaguirre and Natalia Nassar captured their second straight doubles championship. The Tigers’ second doubles tandem of Jennifer Mathieu and Kendall Couch advanced to the state semifinals, where they dropped a heartbreaking three-set match.

“All six of our girls are so-called Super Champs, which is the top category in the USTA rankings for their age group,” said Caine. “We’re only losing two seniors, so the future also looks really bright.” 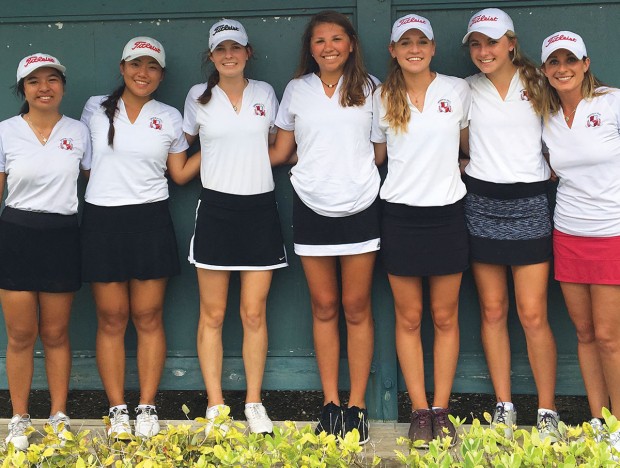 The Memorial Mustangs girls golf team finished fourth at the UIL 6A State Golf Tournament, marking the team’s best showing in school history. Junior Madeline Burleson fired a one-over-par 73 on the second day as Memorial came on strong to capture fourth place. “Madeline is our No. 1 golfer,” said Mustangs golf coach Holly Paulk. “She has several major colleges already looking at her, and even played in the big Annika Sorenstam tournament, which features the nation’s top 72 youth golf players.”

At state, Mustangs sophomore Tiffany Nguyen posted the team’s best overall score over the 36 holes with an eight-over-par 154 score. Sophomore’s Lindsay Riddle and Courtney Bryant, as well as junior Erin Xu, rounded out the Mustangs’ fivesome at state.

“Our nerves kind of got to us on Day 1, but the second day we had a goal to shoot an overall 301 and ended improving our score by 15 strokes,” said Paulk. Paulk was also thrilled to see her team finish ahead of a Clements Rangers team that had won the regional title just two weeks earlier. “Clements was the top team in the Houston area this year, and for us to beat them at state was one of our goals.”

Also in golf, after winning its first-ever district championship, Duchesne Academy finished sixth overall at the TAPPS 5A State Golf Tournament. It was the team’s first berth at state in 15 years. The Chargers were led by freshman Danielle Talley, who shot a pair of 82s to finish two strokes out of the top 10. Freshmen Joanna Kass and Meghan Pennington, as well as junior Lauren Valentine and sophomore Camilla Valente, also made up the Chargers’ state-tournament team.