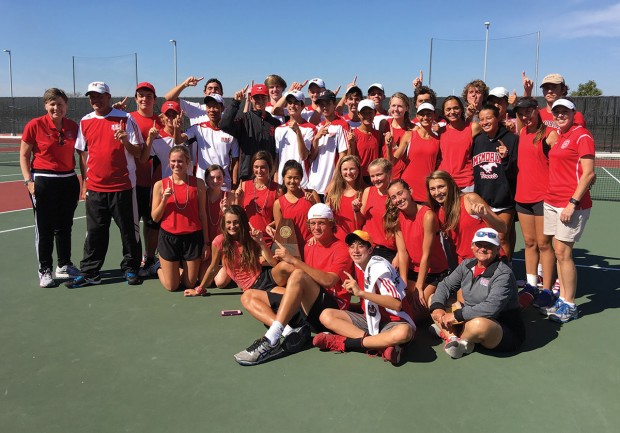 MEMORIAL ON THE COURT The Memorial Mustangs tennis team won its eighth consecutive regional championship in UIL team tennis and finished second at the Class 6A state tournament.

Chalk up another powerful season for the Memorial Mustangs tennis team, which advanced to the state finals in team tennis for the fifth time in school history.

To get there, Memorial captured its eighth straight regional championship, before ultimately falling to Plano West by a 10-6 margin in the Class 6A State Team Tennis Championship Final.

“Our kids just played outstanding all year,” said Mustangs tennis coach Bud Booth. The Mustangs boasted an overall record of 18-1, with their only defeat coming in the state-title match. Memorial also won its 12th consecutive district championship, and owned a No. 1 state ranking for virtually the entire season. “It was really exciting for us to have that No. 1 ranking, and the kids also held up to the pressure that comes with that kind of recognition.”

Memorial’s No. 1 boys singles player was Andrew Esses, with Anthony Huynh, Artur Zigman, Neil Mabee, Ben Westwick, Cole Rassner and Thomas Graves also winning big matches throughout the season. On the girls’ side, freshman Natalija Dimitrijevic, who teamed with Rassner to win their state-finals match in mixed doubles, was the Mustangs’ No. 1-seeded player. Plus, Chloe Sands, Natalie Hur, Maya Prakash, Sarah Mabee, Nina Solovyeva and Lauren Vu were all major contributors in the Mustangs’ magnificent run to the state finals. 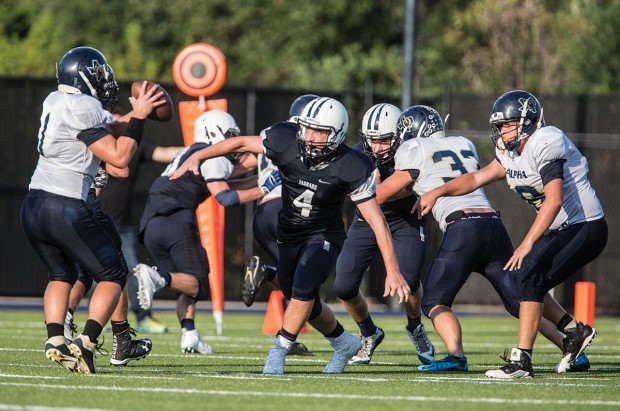 HARD-CHARGING JAGUAR Emery/Weiner all-state linebacker Lewis Graubart busts through the offensive line to make a big play for the Jaguars. Emery/Weiner advanced to the second round of the TAPPS Six-Man football playoffs this season. (Photo: Michael Starghill Photography)

The Emery/Weiner Jaguars finished just three wins shy of defending its TAPPS Division 1 state championship in six-man football. The Jaguars were defeated by Austin Veritas Academy 77-66 in the second round of the playoffs to finish the year with a 9-2 record. Ironically, the Jaguars had defeated Veritas in the third game of the regular season 78-64. “It still was a great year,” said Jaguars head coach Adrian Adams. “It’s really difficult to win two state titles in a row. We had a bull’s-eye on our back all season.”

Adams had high praise for a standout senior class, including quarterback David Kleban, who threw for over 2,000 yards and 47 touchdowns, while four-year letterman Lewis Graubart led the team with over 100 tackles. In addition, Michael Ran not only had nine interceptions on defense, but also scored 11 touchdowns as the Jaguars’ leading receiver. Another top receiver was Garrett Glover, who scored 11 touchdowns this season. 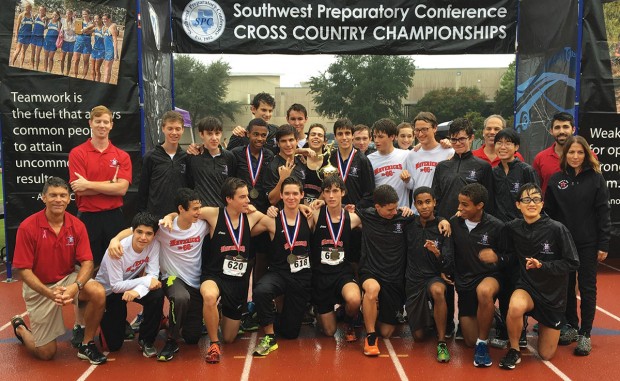 WE ARE THE CHAMPIONS For the third consecutive season, the St. John’s Mavericks captured the SPC Boys Cross Country Championship. The Mavericks had five of the top 20 finishers at this year’s SPC meet.

In cross country, the St. John’s Mavericks ran away from the field to handily win their third straight SPC Boys Cross Country Championship. “We have great depth on this team, and all our guys ran a tremendous race,” said Mavericks coach Richie Mercado.

The Mavericks boasted five of the top 20 finishers at the SPC meet, including Drew Woodfolk, who finished fifth overall. “Drew ran really well despite battling some hip issues that bothered him this season. He’s a great runner and a hard worker,” said Mercado.

The other top 20 finishers for St. John’s, who all earned all-state honors along with Woodfolk, were Sam Faraguna, Jayan Hanson, Sean Jackson and Pearse Higgason. In addition, Ian Thakur and Samuel Ho, who both just finished just outside the top 20, scored valuable points as St John’s chalked up the 16th SPC Boys Cross Country Championship in school history.

For the third straight year, St. Agnes Academy finished a strong second at the TAPPS 6A State Cross Country Meet. “We ran solid all season,” said Tigers coach Kristi Robbins. “We were always in the top three at the major UIL meets we competed in across the state.”

At the TAPPS state meet, senior Maryella Cohn led the way for the Tigers with a third-place overall finish, while junior Emily Sullivan was the next top finisher for St. Agnes. Also running well for the Tigers at the state meet were Amber Boettiger, Savannah Marks, Emelia Bartusiak, Claire Scott and Emory Reilly.

“Our freshmen stepped up and all the girls ran their best at state. They worked hard all summer and gave it everything they had,” said Robbins. “Plus, with three of our top girls returning, we should have a great shot at winning it all next season.”