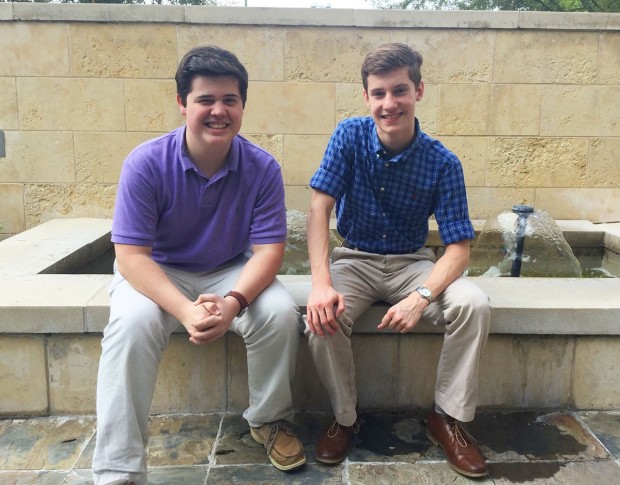 (From left) Shane Pesek and Andrew Checchia were two of this year's winners of the Crusader Arts Festival at Strake Jesuit.

Though there’s no such thing as a bad time to be an artist at Strake Jesuit, the month of February provides the largest stage for aspiring patrons of the arts. At the Crusader Arts festival, an annual presentation of video, audio and graphical pieces, any and all students are given free rein to create and present their work to the entire student body. Not only are the works admired, but each individual piece is also examined by a panel of judges who allocate awards to the most deserving entries. While this process is generally taken pretty seriously, with the future Tarantinos and Da Vincis dueling it out at center stage, the “people’s choice” awards never fail to bring attention to the most bizarre and eclectic works the festival has to offer.

There’s no particular style that entries must abide by, resulting in stark differences between each entry - for example, Andrew Checchia and Shane Pesek, two students who produced musical pieces, couldn’t have been more different in their respective approaches. While Andrew, a proficient musician, created a brooding soundscape titled “War,” Shane, this year's “People’s Choice” winner, wrote and produced a ridiculous rap song about the Kardashians. Despite the obvious contrasts, though, both pieces fit within the competition’s loose criteria and were judged on an equal playing field. This lack of rigid guidelines allows for students of all interests and mindsets to have the opportunity to display their individual artistic statements, be they serious, lighthearted, or somewhere in between.

Whether artists are simply art appreciators, all Strake students are given the opportunity to admire the talents of their peers. One of this year’s biggest hits was the mesmerizing saxophone solo courtesy of Chris Casillas, who decided it would be best to deliver his entry in person. Dozens of students and faculty gathered around him as he performed, taken aback by his smooth demeanor and overflowing supply of talent. Other noteworthy pieces included a graphical ode to basketball that appeared to have been drawn in Microsoft Paint, a moody, atmospheric art film, and a minimalistic portrait of this year’s choir.

While it often seems as though everyone at Strake wants to be an engineer, events like Crusader Arts provide the opportunity for each student to step out of his comfort zone and get his feet wet in something other than vanilla academia. It’s a unique tradition, one that allows students to learn more about themselves and each other by shifting their focus to the more artistic, creative end of the spectrum. Even students without a modicum of artistic talent - such as myself - can find enjoyment through the encouragement of their peers and the consumption of free food.

From sax solos to Kardashian raps, the Crusader Arts Festival is just another little piece of the offbeat daily lives of Strake Jesuit students. We may not all have Oscars in our future, but what we lack in raw talent, we make up in heart, passion and the acute desire to be as weird as humanly possible.