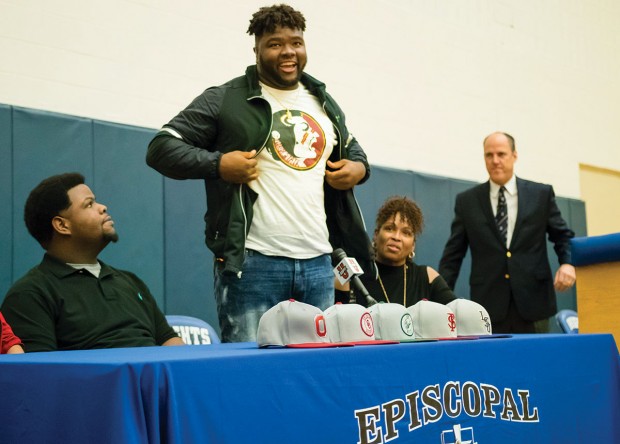 With a national television audience on ESPN looking on, as well as a packed on-campus gymnasium, Episcopal Knights defensive tackle Marvin Wilson announced his decision to play college football at Florida State University. Wilson was ranked as high as No. 1 in the nation among defensive linemen, and his much-anticipated announcement capped off a suspense-filled National Signing Day for the top high school football players.

“All the coaches from around the country wanted to know where I was going to go, but it wasn’t until about the last two days before this signing that I made my decision,” said Wilson, who had narrowed his finalists to LSU, Ohio State, Oklahoma and South Florida before selecting the Seminoles.

“Coach (Jimbo) Fisher came to my house and really gave me the greatest pitch. He said it was going to be a family environment at Florida State, where I’d be taken care of both on and off the field. We’re going to do things like community-service projects, while also win national championships and ultimately becoming  great people after football. That’s what he promised me, and I’m taking that promise forward. Making this decision is a great lift off my shoulders, and now I can go back to being a normal football player and student.” 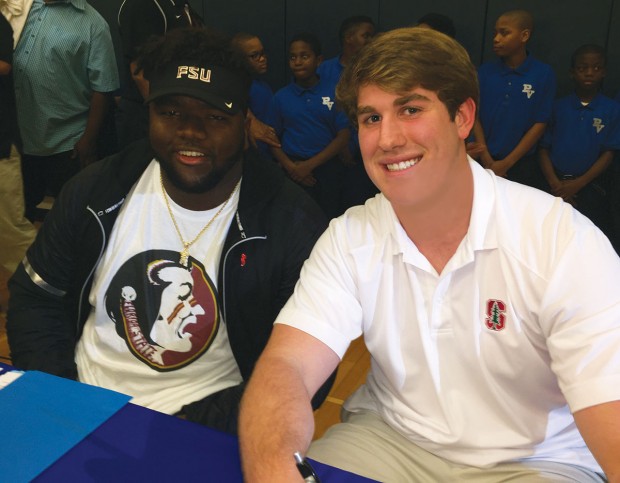 GREAT KNIGHTS Episcopal Knights defensive tackle Marvin Wilson (left) announced his collegiate choice before a national television audience. Wilson, a Florida State signee, is seated next to Episcopal teammate Walker Little, who earlier had committed to Stanford University. On the far right is Episcopal running back Jake LeVrier, who signed with Texas Tech.

Amazingly, with Knights teammate and the nation’s top offensive-line recruit Walker Little having signed with Stanford, Episcopal is sending the nation’s top defensive and offensive line prospects to the college football ranks. “These two guys could ultimately be NFL first-round draft picks,” said Episcopal football coach Steve Leisz. “It’s pretty incredible. We were thinking that maybe ESPN should do one of their 30 for 30 documentaries on these guys. In four years, they could be even be the No. 1 and No. 2 players taken in the draft.”

There was definitely strength in numbers for the Lamar Texans football team on National Signing Day. The Texans boasted a remarkable recruiting class, with 16 of the Texans players signing on to play college football. “We worked hard for four years to get to this point,” said Texans defensive end Devon Tibbs, who signed to play at North Texas. “We knew this was going to be a great class, and we definitely finished it off today.” 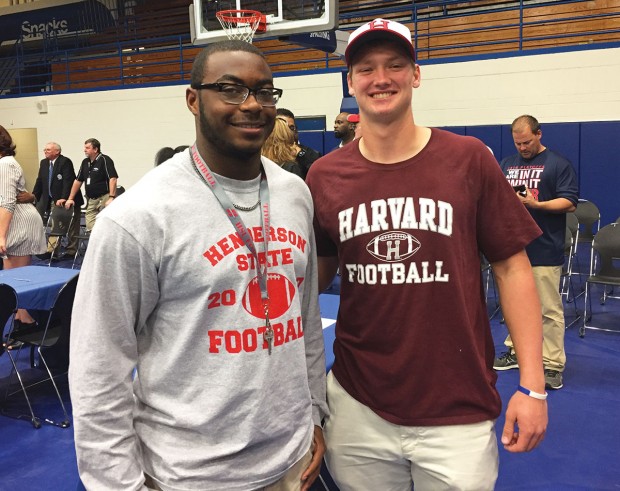 Along with Tibbs, other noteworthy signees for the Texans included Tre’Von Lewis (Baylor), Jalen Moy (Air Force), Calvin Fletcher (Louisiana Monroe), Carlton Smith (New Mexico) and Owen Holt (Harvard). “I think the success of this class is also a testament to our coaches,” said Lewis. “It’s really a very special and wonderful day for all of us.”

It was a wonderful signing day as well for the Bellaire Cardinals football program, with Alex Duke (Houston), Donovan Stiner (Florida) and Jayden Peevy (Texas A&M) all signing to play at the highest level of collegiate football. “It’s a great class with tremendous potential at the next level,” said Peevy, a four star recruit, who’s generally regarded as one of the state’s top tight end prospects.

As for Duke, the senior defensive end honored his commitment to attend the University of Houston despite the late coaching change at UH with Tom Herman’s departure to Texas. “You don’t commit to a coach, you commit to a school and how you think you’ll produce at that school,” said Duke. Coach (Major) Applewhite knows what he’s doing, and he’s going to keep great things going at UH.” 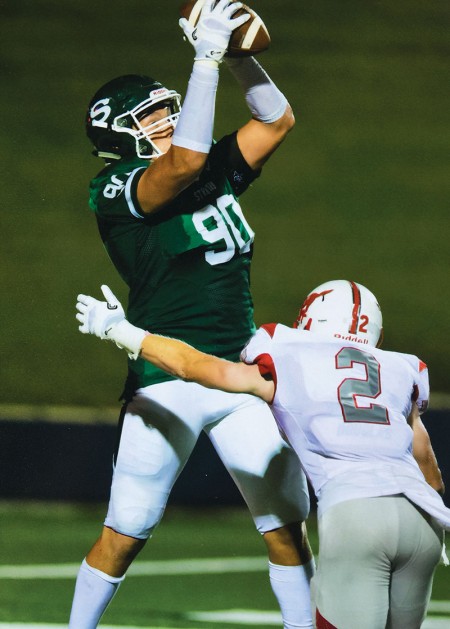 ALL IN THE FAMILY Stratford Spartans defensive end Sam Miller (#90) will follow in the footsteps of older brother Alex to play football at Northwestern University. Sam was one of four Stratford players to sign college football offers on National Signing Day.

At Stratford High School, the Spartans are sending an impressive foursome of players to college football, including standout defensive end Sam Miller, who signed with Northwestern University. The signing takes on some special family ties since Miller will join his older brother Alex on the Northwestern football roster. Alex, who graduated just a year ago from Stratford, saw considerable playing time this season as a freshman at Northwestern.

In addition, Stratford linebacker Randall Royall signed with Rice University, wide receiver Jaetavian Toles committed to Tulane, and offensive lineman Jimmy Price is going to Stephen F. Austin State University. “It’s a tremendous bunch of kids,” said Stratford football coach Eliot Allen. “The especially great thing is that this is an outstanding academic class. To send kids to great academic institutions like Northwestern, Rice and Tulane to continue their education along with their football careers is pretty special.”