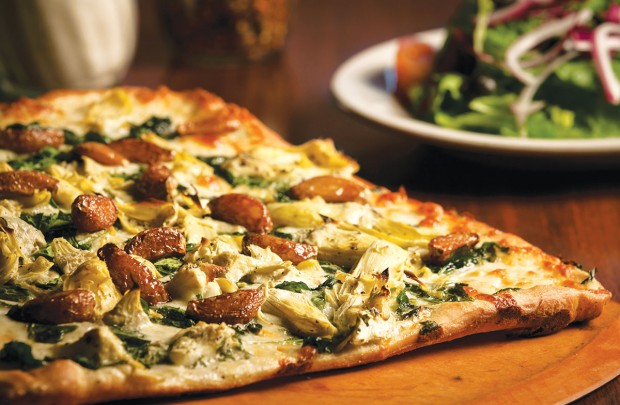 GREEN PIZZA The three amigos on this vegetarian pizza from Russo’s New York Pizzeria are spinach, kale and artichoke, plus a hefty dose of roasted garlic thrown in for good measure.

The National Restaurant Association’s latest forecast predicted sriracha as the new ketchup, as well as restaurant stores (aka grocerants like H-E-B’s Table 57, 5895 San Felipe). But at the top of list? Veggie-centric entrees. “And even when animal proteins are included,” said the trade association, “the veg is still the main attraction.”

At The Pass & Provisions (807 Taft Street), the Cresta di Gallo pasta lure diners back with its mélange of mushrooms, bathed in a rich Parmesan cream sauce.

Always a step ahead of the trends, Anita Jaisinghani has helped to elevate Indian food in Houston with Indika (516 Westheimer), the dressier companion to younger sibling Pondicheri Bake Lab + Shop (2800 Kirby). Last fall, she opened a second Pondicheri outlet in Manhattan and garnered fans along with praises. “There isn’t anything in the city quite like Pondicheri,” scribed New York Times critic Pete Wells.

The same can be said about her vegetarian offerings. Wells described Anita’s beet uttapam pancake as “the perfect lunch,” topped with a fried egg and served with a salad and other vegetarian accompaniments. Always focused on a healthier lifestyle, Anita finds herself creating more dishes centered around vegetables. She’s currently rehauling the menus at fast-casual Pondicheri Bake Lab + Shop.

“My next move is to move meat off the center of the plate,” she said. “That’s not to say I’m going to make it all vegetarian because I might add some fish or other seafood, but there is going to be more vegetables. The meat is there to enhance the flavors of the vegetables or grains. It makes it more interesting, and it hits the body so much easier. I mean, ‘How does it make you feel after eating a hunk of meat?’”

“I listen to their requests, and then, I execute,” he said. “Look, if you’re not a vegetarian, you’re simply not going to understand the flavor profile like a vegetarian. My job is to make food people love to eat, so when they make a request, I make it.”

A non-meat item is the tow hou sam ros. “Tow hou means tofu,” Jett explained, “which we lightly dust with flour and fry, then toss in a chile-basil tamarind sauce.” Another popular dish is the tow hou tod, baked tofu simmered in a basil green curry sauce. Always a hit is his pad thai with tofu, but Jett said for vegetarians, he will substitute soy sauce for fish sauce. “This changes the flavor profile completely,” he said, “since the main flavors of pad thai is fish sauce, sugar and tamarind.”

Diners’ tastes have changed, Jett noted. More are opting for vegetable-heavy dishes. Even if they’re not vegetarians, they may decide to be “flexitarians,” part-time vegetarians. These days, more than half of his clientele in Sugar Land order vegetarian entrees. He said, “We have people who may decide to eat vegetarian just for a day or two days out of the week and others who will skip meat for five months out of the year.”

Located near the Medical Center, Lucille’s (5512 La Branch Street) attracts health-minded diners. For his vegetarians, chef-owner Christopher Williams created a roasted butternut squash entrée with roasted pumpkin seeds, cilantro puree, spiced soy yogurt and fennel fronds. Another dish is southern hummus made with black-eye peas  with nutty tahini sauce, cumin-laced olive oil, lime and tangy sumac. “We top it off with shaved baby heirloom carrots and tomatoes,” said Christopher, who started playing with vegetarian dishes after his father’s heart attack three years ago. “We started playing with the hummus, and he dug it.”