The comeback of hotels 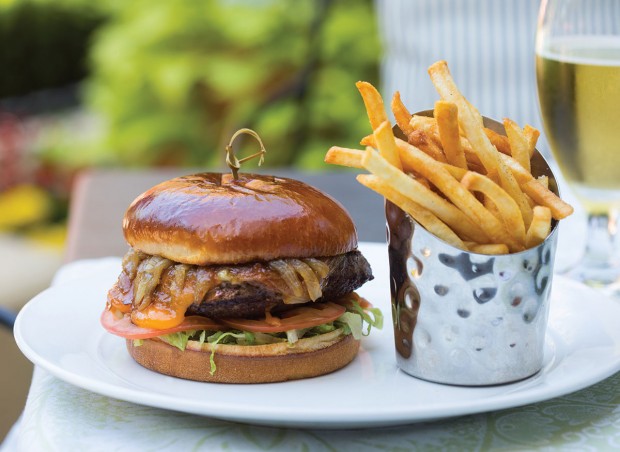 IL GIARDINO The Amburghesa with Kobe beef and caramelized onions is a popular item for al fresco dining at Il Giardino in the Hotel Granduca Houston. (Photo: Hotel Granduca)

Up until the late ’80s, hotel restaurants were the headliners. For many cities, including Houston, they were cultural institutions featuring avant-garde menus and esteemed chefs. But then the ’90s arrived, and the Food Network launched in the spring of 1993. A modern food revolution arose, and suddenly, “Bam!”

Emeril Lagasse was cooking before a TV audience along with Curtis Aikens and Jacques Pépin. Two years later, Mario Batali and Bobby Flay made their debut on cable, and donning a toque was officially cool. Independent, chef-driven restaurants switched on their burners at a dizzying rate, and hotel dining was no longer the main dish. Now, hotels are reestablishing themselves and experiencing a dining renaissance. How?

“You got 1,000 people sleeping above you who have no kitchen and need to eat,” says Tracy Vaught, who with husband Ortega is behind some of the city’s most popular restaurants, including Hugo’s and Caracol. “That’s a gift. The hotel supplies you with customers. I think these days, it’s important for hotels to have a local presence.”

Which is why celebrity chef Richard Sandoval decided on an American concept with a southern flair for the Four Seasons Hotel (1300 Lamar). Bayou & Bottle is one of the most relevant transformations in the last three decades, said general manager Tom Segesta. Not only can you play a game of virtual golf there, but walk down memory lane in the Angel’s Share private dining room lined with 50 or so photos of historical relevance to Houston. The hotel also added a grab-and-go coffee bar with breakfast pastries, including bourbon croissants to mirror the extensive bourbon and whiskey collection at chef-driven lounge. “We wanted to create an approachable, unintimidating living room setting where people can spend many hours making connections and meeting friends,” Segesta said, adding that there are more improvements to come.

Restaurant competition is fierce, and hotels need to constantly update their menus to amp their appeal. But unlike stand-alone restaurants, where updates can be made immediately, hotel dining changes are slow to roll out. Even after six months, executive chef Franklin Thompson and sous chef Mathew Cooper at Omni Houston Hotel (Four Riverway) are finalizing new items for Noe Grill. “Independent restaurants tweak as they go, whereas in a hotel, all the tweaking has been done before it gets out to the diner,” said Cooper.

Hotel restaurants are getting more savvy at marketing themselves to compete with independents. Shedding the cookie-cutter approach, Cooper said, hotels are now more chef focused and market driven. People want to experience food with a local flair, he explained. Even though there is a Noe in Houston and in Los Angeles and their menus share the same building blocks, the offerings do not mirror each other.

The same holds true at ARA restaurant in the Royal Sonesta (2222 W. Loop South), where chef Robert Graham often customizes menus for guests. “A free-standing restaurant might be limited by its resources, but when you belong to a network of hotels, you can pick up the phone and ask what is the best seafood available in Boston right now. So, there is the buying power, and that gives you a little bit better pricing,” he said.

In April, Italian Riviera-inspired Hotel Granduca (1080 Uptown Park Boulevard) launched its new al fresco dining concept, Il Giardino, or “the garden” in Italian. It’s meant to be a casual companion to the elegant, award-winning Ristorante Cavour and an added draw for out-of-towner and local travelers. The palm-lined oasis overlooks the pool, dotted with cabanas, patio tables and plush settees under a veranda. General manager Martin Nicholson said these days, many people opt for a “staycation.” Here, residents from Conroe, the Woodlands, Katy, Tomball, Galveston and Clear Lake come to regenerate and refresh. They check in and dine at Cavour or in the garden at Il Giardino. He noticed, too, many non-staying guests dropping into Il Giardino to escape from the Galleria fray and unwind with an espresso or Italian craft beer with pizza. On Saturday evenings, couples nosh on Italian appetizers while listening to live jazz.

Some industry types have claimed that “the future of dining is going to be in hotels.” True or not, what many people can agree with is that, as Food & Wine Magazine said, “hotel dining has never been better.”