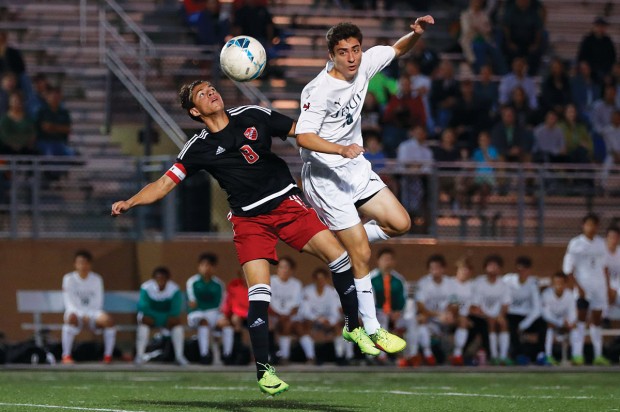 HEADS-UP PLAY Strake Jesuit junior midfielder Diego Blancq Cazaux was among the big contributors for a Crusaders team that was ranked No. 1 in the state and third in the nation at the end of the regular season. (Photo: Wayne Donnelly)

In the wake of a remarkable, undefeated regular season, the Strake Jesuit Crusaders entered the UIL soccer playoffs as the top-ranked high school team in Texas and a No. 3 national ranking, according to Top Drawer Soccer.

“Zero losses at the end of the regular season doesn’t happen too often, so we were very proud to get that kind of recognition,” said coach Bill McDonald.

Team unity was key to the Crusaders’ success, according to senior forward Santiago Chavez: “Most of us have been playing together since our freshman year. I think it reflects how much work and dedication we’ve put into this season and the last four years.”

The Crusaders put their best foot forward right from the start of the season by shutting out its first four opponents while competing in the prestigious Klein Showcase and Governor’s Cup tournaments. “Junior center back Tom Haney is the leader of our defense, while senior Chase West is another solid defender who’s done a great job of denying the other team’s attack,” said McDonald.

Offensively, the Crusaders are loaded with firepower, with midfielders Diego Sordelli and Angel Cueva accounting for 30 goals and nine assists between the two of them and Chavez adding another nine goals and four assists. Junior midfielder Diego Blancq Cazaux, senior midfielder Jared Rice and senior left back Harrison Vickers were all big contributors to the Crusaders’ offensive attack.  “We’re able to attack from so many different angles,” said McDonald. “The other big thing about this team is that these guys really do care a lot about each other.”

In girls’ soccer, the Bellaire Cardinals won their fourth consecutive district championship with a perfect 12-0 district record. Amazingly, the Cardinals didn’t allow a single goal in district play, outscoring their opponents by an 80-0 margin, making Bellaire the only Class 6A team in Texas to not allow a district goal.

“We had a tremendously successful season,” said coach Alan Thompson. “But there was disappointment with a 2-1 opening playoff loss to Cy Fair. We wanted to make this happen for our seniors, so the playoff defeat really stings right now.”

The Cardinals were led in scoring by junior Allison Schachter, who will play college soccer at the University of Pennsylvania. Schacter scored a lofty 31 goals with 17 assists in the Cardinals’ 21 games this season. “Allie is the hardest worker I’ve seen in my 11 years of coaching,” said Thompson. “Her work ethic and team-first spirit make her a special person and player.” 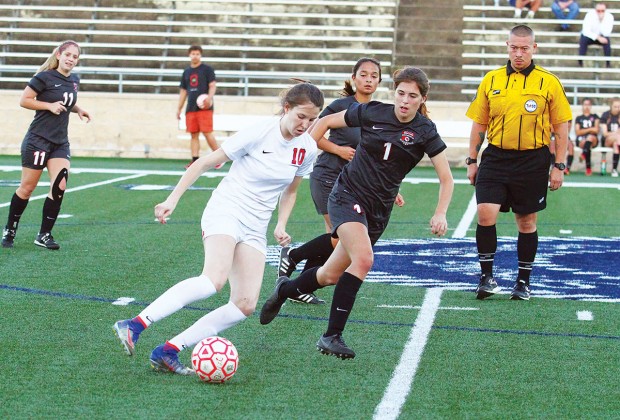 It was another terrific season for the Memorial Mustangs girls’ soccer team, which raised its season record to 16-4 with a decisive 6-0 first-round playoff victory over Aldine Davis. “We moved into a really tough district this season, and the girls really stepped up to the challenge,” said coach Lindley Amarantos.

Along with winning their bracket in the I-10 Shootout, the Mustangs earned a thrilling 2-1 district victory over perennial statewide powerhouse Klein. The Mustangs trailed 1-0 before rallying to score the winning goal with only 20 seconds left in the game. “It was Klein’s only district loss of the year, and really a big-time victory for us,” said Amarantos.

The Mustangs’ lineup boasts a trio of players who’ve committed to play collegiate soccer, including junior Grace Yochum, who’ll play at Oklahoma State. Yochum led the team in assists and was second in goals.  In addition, junior goal keeper Bella Killgore, who Amarantos describes as a “vocal leader on the back of the defense,” has committed to play for Rice University, while sophomore forward Grace Collins has already committed to TCU. All three of those players were all-district choices this season.

Meanwhile, Amarantos also had high praise for sophomore forward Alina Khan and sophomore midfielder Maddie Dichiara. “Alina is a cool and collective player who is very technically skilled, while Maddie is a physical player and an excellent distributor.”