Eating well, at the airport 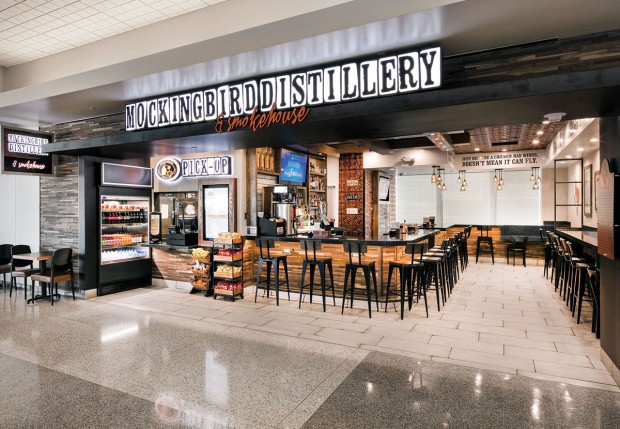 Chef-driven airport dining isn't unique to Houston. Chefs across the country are spreading their wings, partnering with airport restaurant-management firms, including HMSHost and OTG.

Bryan Caswell was the first Houston celebrity chef to land at IAH three-plus years ago, successfully opening Gulf Coast-inspired 3rd Bar Oyster and Eating House with HMSHost in Terminal B. Most brick-and-mortar restaurant owners would be over the moon serving 500 people a day. The 3rd Bar's typical cover is 800. But opening a restaurant inside an airport is "like opening a taco stand on the moon," Caswell said. "There are a lot of things that I don't have any point of reference for, like security clearance for all employees and the type of staff willing to work at an airport."

He learned, too, that peak hours differ at an airport. "It changes and changes often," he said. Tuesdays and Thursdays are typically busiest at 3rd Bar. "Typically, Saturday is the busiest night for a restaurant, but in the airport, Saturday is dead. It's very topsy-turvy. There is more math involved as to when you're busy. And holy smokes! If there are rains or delays, you turn into a ballpark."

Despite the challenges of running a made-from-scratch restaurant next to a landing strip, Caswell wasn't deterred last winter from opening Tex-Mex El Real at the bustling food court in  Terminal B .

There will be more chef-led concepts on IAH's itinerary in the second half of 2017. When OTG and United Airlines complete renovations of Terminals C-South and E, travelers will find the following:

• Agave: A taqueria from Taco A Go Go and Fajitas A Go Go chef Sharon Haynes.

• Gavi: Chef Ryan Pera will serve pizzas and pastas here, as well as offer a mini Revival Market featuring a grab-and-go deli with charcuterie and other staples, such as pickles and jams.