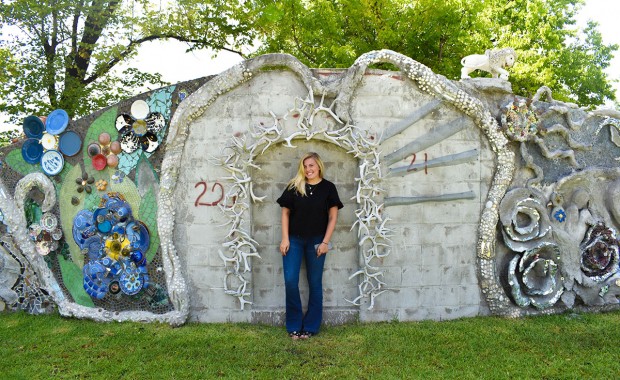 Smither Park is a quaint park in the middle of Downtown Houston (located at 2402 Munger St.), which provides an artistic escape from the real world. Dan Phillips and Stephanie Smither worked side by side to create this park for Stephanie’s late husband. Come by every Saturday to watch the artists add more artwork to the park (weather permitting). 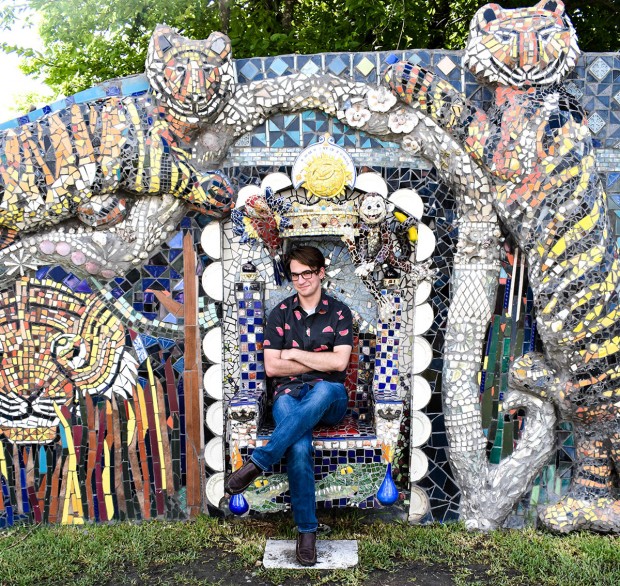 “As an 18-year-old suburban high school student, I don’t get too many opportunities to feel like a king. This piece provided me with one such opportunity. Beautifully crafted from seemingly thousands of individual parts, the throne’s colorful structure is immediately eye-catching, conjuring visions of medieval grandeur. Its striking complexity makes more in-depth observations a must, while the fierce tiger portraits round out the piece’s regal aesthetic. The throne’s colored glass shimmers in the sweltering Houston heat, dazzling enough to distract you from just how much you’re sweating - at least for a moment.” 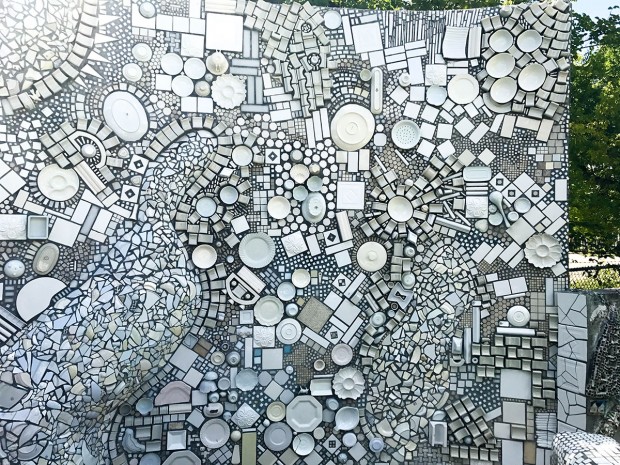 One of the color-coordinated walls, which is made up of old china. (Photo: Jordan Miller-Mandel)

“Walking into the park, your eyes are immediately confused on where to look; the one wall that caught my attention though was an all-white wall made up of bits and pieces of china and tiles. It is the only fully color matching wall in the park and in the center of the whole thing. When walking up to it, you come to find not only is it a wall but also a bench made up of similar materials but all white. The simplicity of it all brought me in and even though it was colorful the different materials and intricate patterns made me stop and stare.” 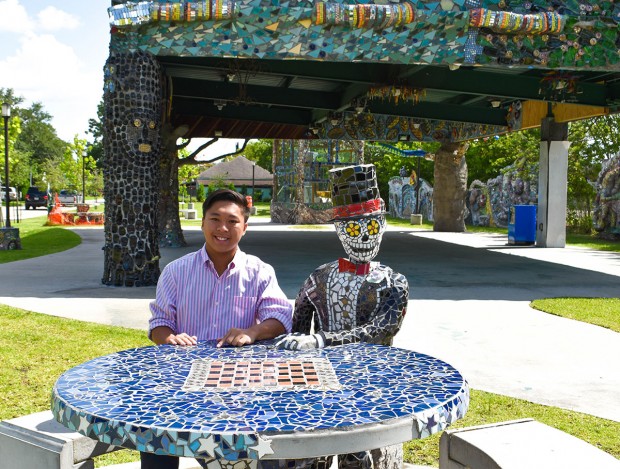 Buzz intern Andrew Duong sitting next to one of the mosaic statues at a picnic table. (Photo: Trevor Schneider)

“To start out, I felt severely underdressed when sitting next to the skeleton dressed in a suit and top hat. I picked this because it represents happiness. The gentleman is alone and probably has been for quite some time, but there’s always a smile on his face. He’s doing what he loves, playing checkers. Another reason I fell in love with it is the use of shards of glass of various colors to make the whole picture fit. His bright red bow tie and the shining, black suit gave me an elegant vibe. Whenever you look into the eyes of something representing death, it’s supposed to scare you. This gentleman’s eyes were different; the bright, yellow flowers were inviting in a sense.” 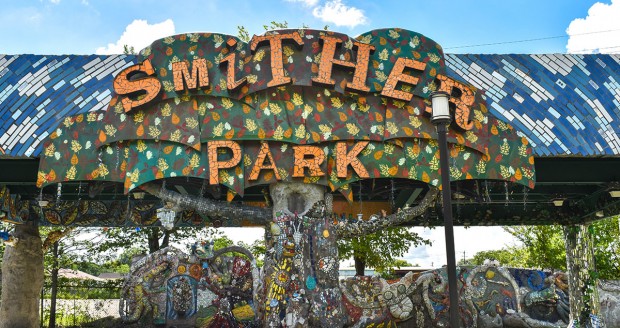 The entrance sign welcoming you to the park. (Photo: Trevor Schneider) 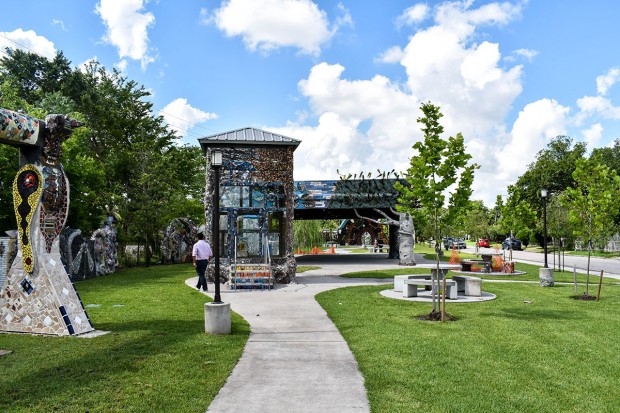 A look at the entrance of the park. Smither Park is located at 2402 Munger St. (Photo: Trevor Schneider) 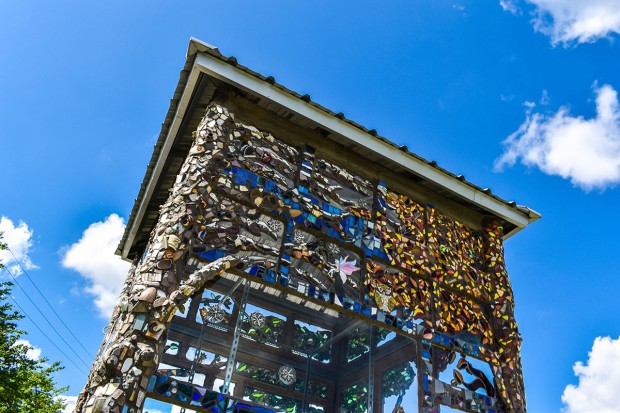 A look up at a tower full of mosaics in the park. (Photo: Trevor Schneider) 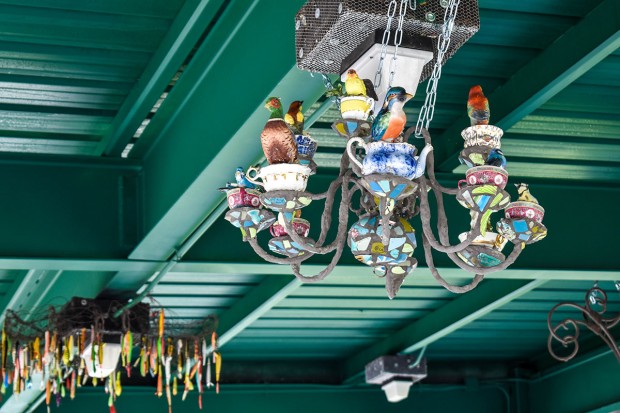 One of the intricate chandeliers under the pavilion at the park. (Photo: Trevor Schneider)

A look at one of the walls covered in mosaics that line the whole park. (Photo: Jordan Miller-Mandel) 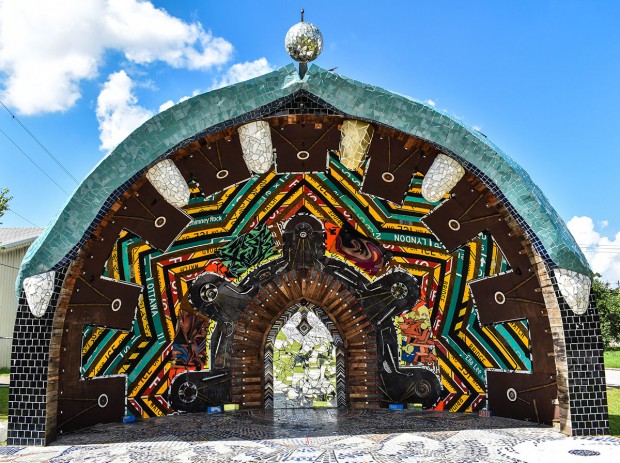 The opening of another covered area at the park, complete with a disco ball and old road signs used as décor. (Photo: Trevor Schneider) 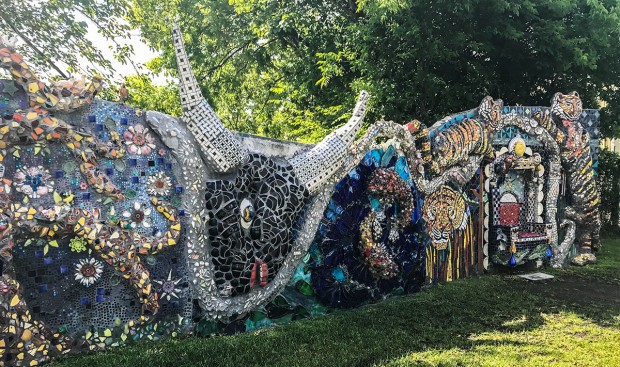 A look at another line of walls in the park. (Photo: Jordan Miller-Mandel) 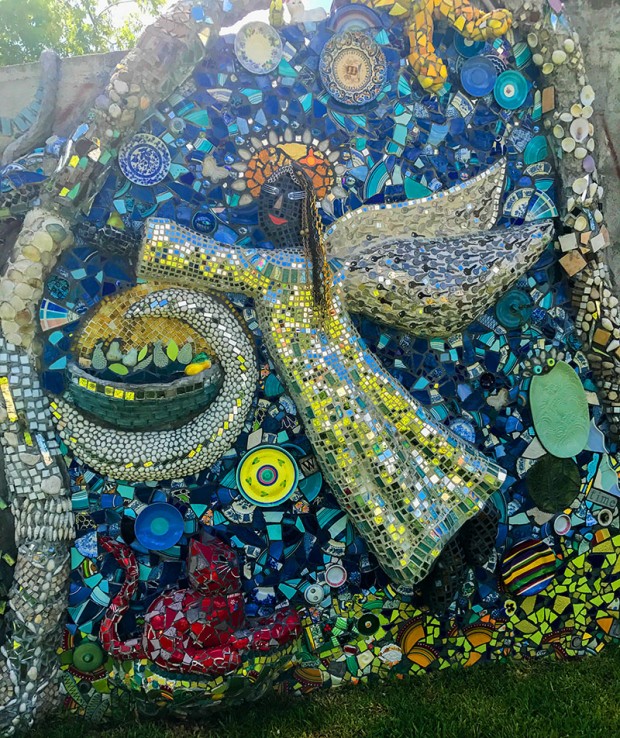 An angel mosaic featured in the park. (Photo: Jordan Miller-Mandel 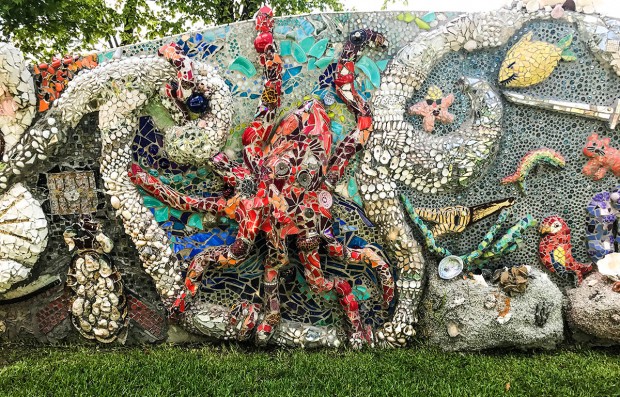 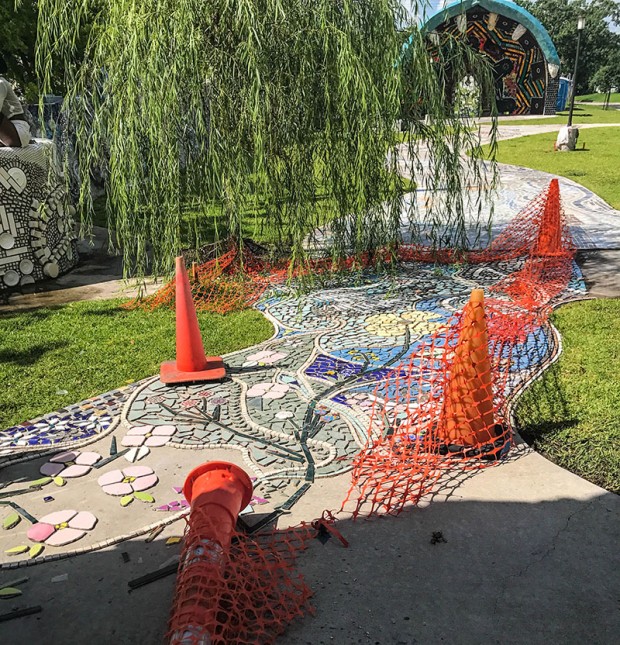 The start of a sidewalk mural, which is still under construction and closed off for the time being. (Photo: Jordan Miller-Mandel) 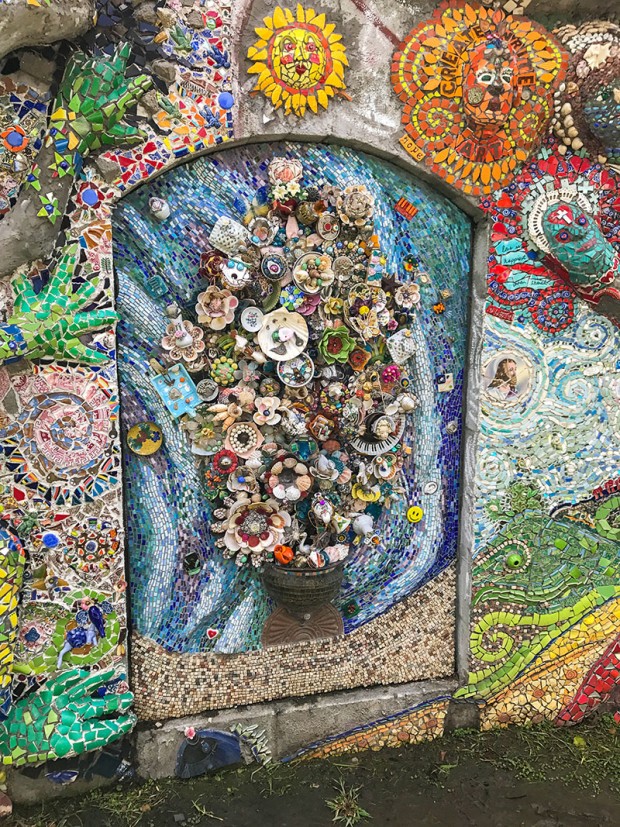 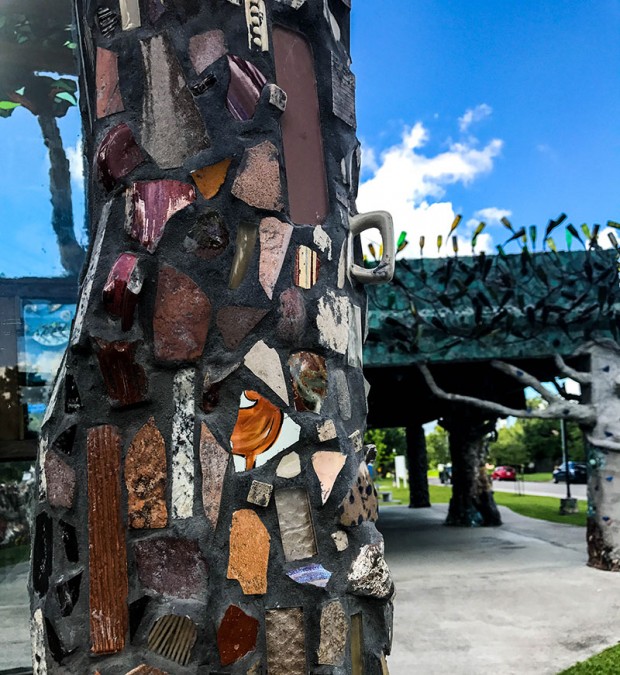 A close-up of one of the columns used in the park and pieces of tile that were used to create the mosaics. (Photo: Jordan Miller-Mandel)