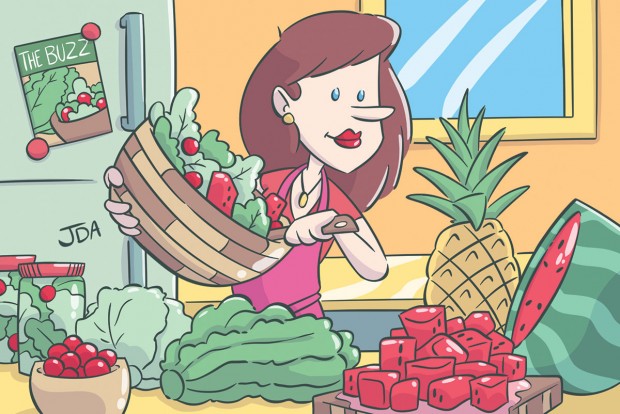 CRUNCHY This summer stay away from the oven and toss together some refreshing salads instead.

Enter the summer salad. Crunchy, cold and, best of all, no cooking required. Just throw a few things together (we’re assembling, not cooking) and you’ve got the perfect lunch or dinner for days when you literally can fry an egg on the pavement.

Lauren Eagle, a mom of three who owns Lauren Eagle Photography and Alegria Jewelry, says, “I like to cook. But I just put things together, like what do I have here and what do I have there. For salads, I really do think it’s all the extras that make it better. Like when you eat out, they’re always good because they have so much stuff on them.

“I don’t take time to actually read a cookbook,” Lauren says. “I can’t tell you everything on any specific salad, because I’ve made so many different versions. Usually there’s a protein, like a marinated shrimp, with olive oil and lime or orange and seasoning. Lettuce, tomatoes and avocados are staples for me on salads.”

One of Lauren’s favorite ways to put a salad together is in a mason jar. “Start with dressing and anything wet on the bottom, then add protein, then avocado, maybe strawberries or olives, and do chopped up greens at the top,” she says. Lauren likes mixing greens to make the salad more interesting. “Spinach and romaine are my favorite combo.

“Stuff the jar until there’s no air in it, so that some ingredients can’t make others soggy. Then you can dump it out on a plate so the lettuce is on bottom and dressing on top.” Lauren buys mason jars at the Container Store.

“There are times when I’m really organized and will make five or six salads and keep them in the fridge, so if I’m running around I can grab one.”

Lauren also has food allergies, so making her own salads makes life easier. “If we go somewhere, like to camp to pick up in the middle of the country, they won’t have food I can eat,” she says. “It’s hard when trying to eat healthy because it’s not always that quick and easy. But when you plan like this, it is. You can even get really easy and go to the store and buy cut-up watermelon, cherry tomatoes and fresh mint. You can throw it together, and you don’t even have to chop.”

Lauren also suggests toasting lots of seeds or nuts at a time for sprinkling in salads. “Put them in a bag for later, so you don’t have to do it every time.” And for dressings, she likes to make her own, like her honey mustard with ginger and an apple cider vinaigrette (recipes online).

“I love to cook, and I love salads,” says Cathy Burch, a retired attorney, preschool teacher and part-time nonprofit assistant. “If you have leftover grilled chicken or even deli turkey, it’s so nice not to have to cook and just toss ingredients together or do it on the grill, so you’re not turning the oven on. I’ll even grill extra chicken and keep it in the freezer to throw on salads.”

Recently, Cathy attended one of Amy Anton’s local cooking classes, AA Cooks / Kitchen Underground. “It was on Greek cooking,” Cathy says, “but she did a salad that she also did in a summer salads class. It was a hit!”

The Grilled Romaine and Corn Salad [recipe online] does require a little time on the grill, but Cathy says it’s worth the heat. “She just did the lettuce on a grill pan, but if you were making grilled chicken or burgers outside, you could do that too. I was very glad to learn the technique. [Grilling] just adds another dimension to the flavor of the salad, and it’s really not that much work. You just split the romaine longwise, char on both sides, and it takes just a few minutes. And it has this dressing that [Amy] makes with Greek yogurt, and it is delicious.

“I have another salad that I got from my friend Barb Fowler at a Bible study years ago,” Cathy says. “It has grilled chicken and dried apricots and avocado, and it is so good. It has definitely made the rounds! People always ask for that recipe.”

Our Buzz readers need not ask! Check out these summer salad recipes, and save yourself from the heat of the oven.