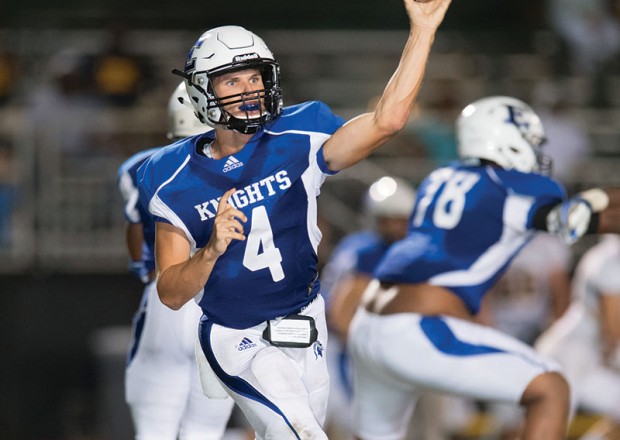 A season removed from producing two of the nation’s top collegiate football prospects, the Episcopal Knights are at it again this season. Wide receiver Jaylen Waddle is ranked among the nation’s top players at his position, following in the footsteps of linemen Walker Little and Marvin Wilson, who went off to Stanford and Florida State, respectively, last season.

“Jaylen is truly special,” said Knights head coach Steve Leisz. “We call him magic – now you see him, now you don’t. Not only does Jaylen have laser speed, but his hip movements and explosion are incredible.” Waddle showcased that sort of explosion in the Knights’ 38-24 victory over rival St. Thomas, where he scored on a 75-yard kickoff return, a 70-yard punt return and a 55-yard pass reception.

For Episcopal, which then went on to defeat Kinkaid 37-27 in an SPC showdown, it’s been much more than a one-man show. Several of the Knights are collegiate prospects, including cornerback Tayjon Martin, tight end Will Edens, junior defensive end Patrick Bayouth and junior running back Jaylen Davis. Davis was also recently named the MVP of the regional Nike football combine.

Leisz also had high praise for defensive linemen Johnny Carrabba and Christian Walmsley, center Alan Ayanegui and quarterback Jack Grams, whom Leisz says is an Ivy League type of prospect. If all that weren’t enough, freshman linemen Luis Chavarria and Cullen Montgomery, who each are about 6’6”, 285 pounders, are already considered to be major collegiate recruits in the coming seasons. “Wouldn’t you know it, their favorite players are Walker Little and Marvin Wilson,” said Leisz. 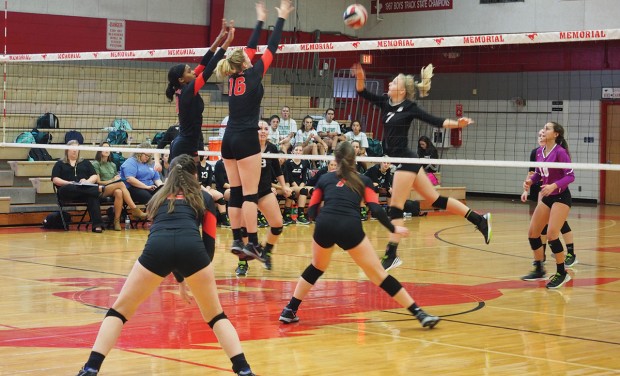 BUILDING BLOCKS Memorial Mustangs outside hitter Sanaa Dotson (left, at the net) and middle blocker Olivia Matthews (#16) are a powerful presence at the net for the Memorial Mustangs volleyball team. Assisting here are Gillian Koskie (right side hitter) and Maddie Taff (setter, in the back).

In volleyball, the Memorial Mustangs were on track for another good season, with 16 victories in the first 25 games. “We have a really scrappy group that play hard every game,” said Mustangs head coach Beth Gammill. “It’s the type of team that has a chance to win every time it takes to the floor.” This season’s victory total includes a big-time victory over defending Class 6A state finalist Clear Creek. “That was a terrific and really fun win for our girls,” said Gammill.

Pacing the Mustangs this season has been the continued outstanding play of junior outside hitter Sanaá Dotson and 6’3” middle blocker Meredith Phillips. Phillips will play college volleyball at Cal Poly, while Dotson is committed to Oklahoma. 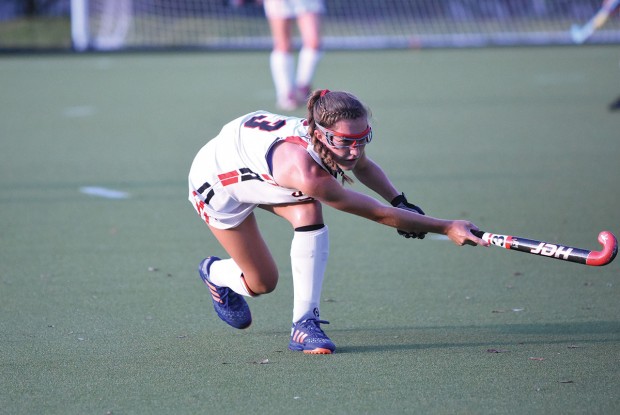 TOUGH ON THE TURF St. John’s junior Frederique Fyhr is one of several major contributors to a Mavericks team that is ranked among the nation’s top high schools in field hockey.

After earning a top 10 national ranking last season, the St. John’s Mavericks remain a powerhouse program in the sport of field hockey. Early on this season, the Mavericks traveled to St. Louis where they went 3-1-1 against some of the country’s top field hockey teams. “We went out there and defeated the No. 8-ranked team in the nation, which was really great,” said Mavericks field hockey coach Craig Chambers.

“We have a talented and experienced lineup, most of whom play field hockey year round. The girls play at the club level in both indoor and outdoor national tournaments. Virtually every one is a big contributor to our success.”

The big contributors include senior captains Audrey Ledbetter, Avery Morris and Isabel Windham, but Chambers had praise for the entire lineup. “We’ve got at least five girls who’ll play field hockey at the collegiate level. Frederique Fyhr, Natalie Stone, May McCabe, Izzy Chambers, Amelie Perrier, Amy Worscheh, Hatley Post and Kate Ainbindor are all terrific players. I can pretty much single out everyone on the team. The thing about field hockey is that it’s a very fast paced and incredibly difficult sport. It takes a lot of hand control, but as a whole, the sport is a lot like soccer.”

On a sidebar note, the Mavericks also have the distinction of playing their home games on one of the premiere high school field hockey turfs in the country. “There’s actually only four high schools in the nation that have this special ‘wet turf’ field,  which we installed last season” said Chambers. “It makes the ball go faster and keeps it on a plain surface. As a result, we’ve hosted some big national tournaments.”