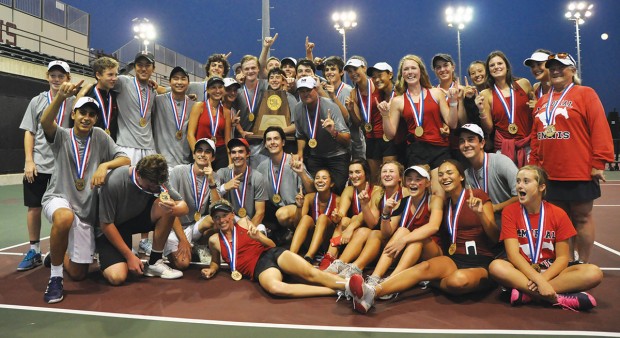 STATE CHAMPS For the first time in school history, the Memorial Mustangs won the Class 6A state championship in team tennis. The Mustangs capped off a dominating 16-0 season by defeating Cypress Ranch 11-5 in the state final.

For the Memorial Mustangs tennis team, it was a Perfect 10. In its 10th straight trip to the state tournament in team tennis, the Mustangs finally secured the elusive state championship.

“The feeling is hard to describe,” said Mustangs tennis coach Bud Booth. “After advancing to the state Final Four in nine consecutive seasons and just coming up short each year, you start to wonder if it’s ever going to happen. What a relief and joy it is to finally win it all.”

In the previous nine trips to the state tournament, the Mustangs had advanced to the state finals six times before ultimately falling in the title match. This time, Memorial secured the state title with a convincing victory 11-5 over Cypress Ranch, winning 11 of the 16 matches between the schools.

“All season long we knew we could do it,” said Booth. “It was just a matter of staying healthy and performing at the right time. The kids played well in virtually every match, leading through a rugged regional draw and then capping things off with a magnificent performance at state. We defeated some really great teams just to get to state, and then took care of business with victories over a tremendous Austin Vandegrift team followed by the clincher over Cy Ranch.”

The title not only capped off a perfect 16-0 season for the Mustangs, but it also marked the first time in 15 years that a team from the Greater Houston Area had won the state championship in team tennis. “It’s amazingly exciting for our entire Memorial community,” added Booth. 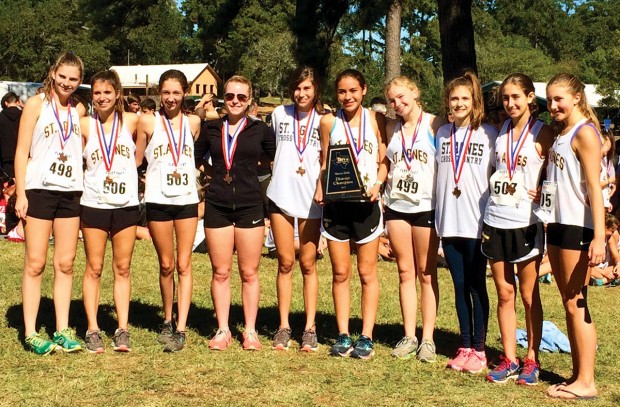 Despite losing several top runners to graduation, it was another tremendous run for the St. Agnes Academy cross-country team, which finished second overall at the TAPPS 6A State Cross Country Meet.  It was the fourth straight year the Tigers finished second at the state meet.

“We graduated four of our top runners from last year, and I really thought this was going to be a rebuilding year,” said St. Agnes cross country coach Kristi Robbins. “We had two freshmen, two sophomores, two juniors and one senior compete at state, and for these girls to come as far as they did was pretty impressive. They gave it all they had, and I couldn’t be prouder of the season they put forth.”

At the state meet, youth served quite well for the Tigers, with freshman Sara Price coming in fifth overall against the state’s top runners, running the two-mile course in 12:09.2. Other top finishers for the Tigers in a field of 120 runners were Emily Sullivan (13), Amelie Born (16), Grace Wolfe (20), Emory Reilly (23), Jackie Cruz (24) and Savannah Marks (30).

“I’m definitely excited about the future,” said Robbins. “Plus, aside from cross country, some of these girls will be a great addition this spring to our track and field team, which has won two straight state championships. I think we’ll have a great shot at winning three in a row.” 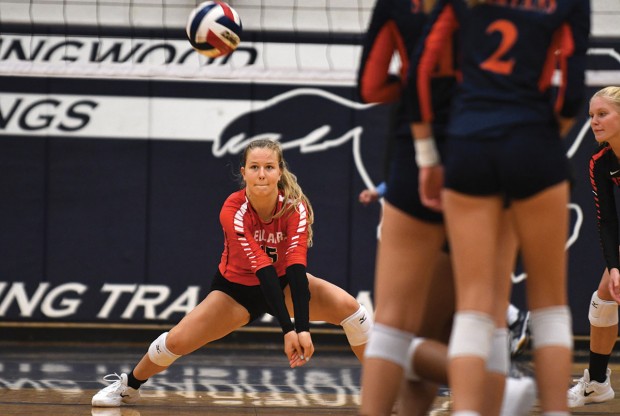 SET AND READY Bellaire All-District libero Emily Hawes was among the key players for a Cardinals team that secured its 17th district title in the last 18 years. (Photo: Jerry Baker)

In volleyball, the Bellaire Cardinals withstood the toll of Hurricane Harvey to secure its 17th district championship in the last 18 years. “The season was short and definitely different, and I think we really overcame some major hurdles,” said Cardinals volleyball coach Ap Clarke.

“Bellaire was hit hard by the hurricane, and several of our players and/or their relatives were displaced by the storm. Their mind was on what it needed to be, which was taking care of their families first and foremost. We had about 16 matches cancelled because of the hurricane, including a big chunk of our non-district schedule and half of our district games, so it wasn’t an easy season by any means.”

Through it all, several of the Cardinals rose to the challenges in front of them, including senior right side hitter Codi Fillmore, who won the District MVP award. In addition, senior outside hitter Aryel Odomes and sophomore libero Emily Hawes were named to the all-district team for the Cardinals.