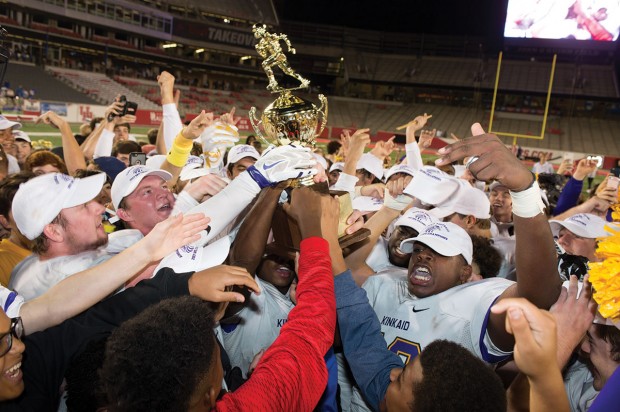 CROWNING CELEBRATION The Kinkaid Falcons took hold of the SPC Championship with a 38-21 victory over rival Episcopal in the final game. The victory marked the 29th football title in school history. (Photo: Kevin Long/Gulf Coast Shots)

As far as the Kinkaid Falcons were concerned, a regular-season loss to rival Episcopal High School was a fair trade-off, considering the outcome of their second meeting of the season. Matched up against the rival Knights in the SPC Championship football game, The Kinkaid School avenged the earlier defeat with a 38-21 victory, securing the 29th title in school history. It marked the second time in the last three years that Kinkaid has defeated Episcopal in the title game.

“Every championship is special for different reasons, but I was especially proud of our guys this year,” said Kinkaid football coach Nathan Larned. “We set our goals before the season even started, of being a tighter family while setting a higher standard on and off the field.”

In the SPC title game, Kinkaid was led by a spectacular game from running back Josh Williams, who rushed for 258 yards and three touchdowns.

In addition, Kinkaid’s Johnathon Thomas was a major factor on offense, defense and special teams, while scoring a rushing touchdown and blocking a field goal in the victory. Also, quarterback Zach Daniel connected with Wyatt Young on a key 46-yard score.

Both Kinkaid and Episcopal were well represented at the season-ending Private High School Awards Dinner, hosted by the Touchdown Club Of Houston. Episcopal wide receiver Jaylen Waddle won the Offensive Player of the Year Award while Kinkaid’s Johnathon Thomas was presented the Ironman Award for his play on both sides of the line of scrimmage.

It was also a special evening for Second Baptist Eagle Victor Curne, who won the Lineman of the Year Award. “Vic is probably the best offensive lineman I’ve had in 29 years of coaching,” said Second Baptist head coach Terry Pirtle. “He was co-MVP of the district, along with our running back Anthony McKenzie. For an offensive lineman to get district MVP is pretty amazing.” The 6’ 6”, 345-pound senior will play college football at the University of Washington.

Meantime, the Defensive Player of the Year Award went to St. Pius X senior safety Rickey Lester. “Ricky is one of the most versatile players to come through our football program,” said Panthers athletic director Jason Kimble. “He can play any position you ask of him. He’s like a Swiss Army knife. Ricky’s also a mild-mannered kid, but when he puts on his pads, it’s like Superman putting on a cape. He also has tremendous grit, having played in the state semifinal game with a cast and three pins in his hand just three days after having surgery for a broken hand.” 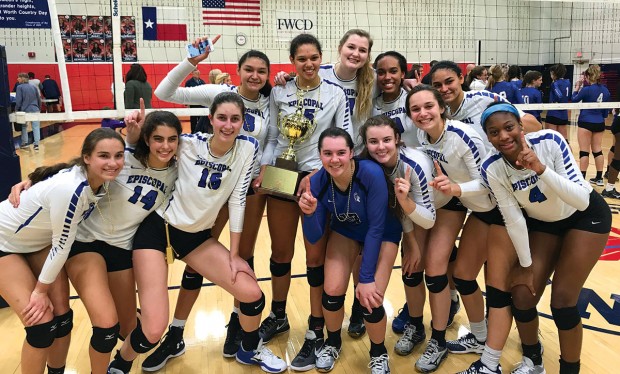 In volleyball, the Episcopal Knights broke a 19-year drought by winning the SPC Volleyball Championship. “We had a great season with a 29-6 record, and after defeating a tough St. Agnes team early on, it really set the tone for our season,” said Knights volleyball coach Amanda Watts. “The girls worked hard with the talent and mentality that they could win the SPC title.”

The Knights’ talented lineup was led by senior setter Mylana Byrd, who’ll play college volleyball at Alabama. “Mylana played multiple positions on the court,” said Watts. “She was huge for us all season.”

Sophomore Trinity Watts led the Knights in digs and aces, including a sensational 30 digs in the Knights’ SPC Championship victory. Also having big games in the championship final were sophomore Brennan Howell and freshman Sania Petties. “Brennan exploded offensively in the title game, while Sania had the kill on match point,” said Watts.

In addition, Watts said freshman Camille Hanna, senior Kansas Watts and junior Kathleen Johnson all put forth great seasons. “Camille’s following quite nicely in the footsteps of her older sister, Gigi, who was a setter here at Episcopal for four years. My daughter Kansas was a four-year starter for us, and she’ll actually go on to play college basketball at Colorado State–Pueblo. Kathleen is a junior middle and right-side hitter who’s being recruited heavily and will do great things for us next year. In all, we have a great group of kids coming back.”