Catching up with Dave and Laura Ward 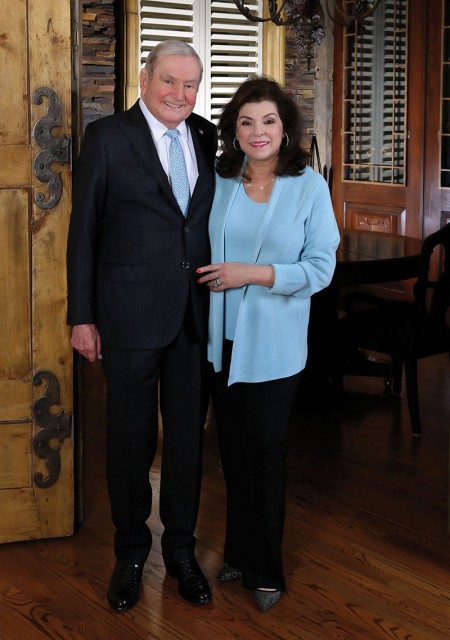 Dave Ward, boots on with an American flag on his lapel, is all smiles with wife Laura. (Photo: lawellphoto.com)

That voice. Rich in tone. Perfect enunciation. It could recite a technical manual to a rapt audience.

It’s one thing to have listened to Dave Ward report Houston news for more than 50 years as television’s KTRK Channel 13 anchor, a career that earned him a spot in the Guinness Book of World Records and Anchor Emeritus at the station.

But here, on this overcast afternoon at his Tanglewood home, it’s oddly disorienting hearing that voice in the context of casual conversation. There’s an instinctive urge to look toward his television set.

“His voice is something else,” says the raven-haired object of his affection, wife Laura, who sits cross-legged on an ottoman in their den. “It’s that voice that people know and looked to all those years.”

But it only knows one volume, she deadpans, making hushed venues like church interesting. “The man can’t whisper. And when he dictates, his voice booms throughout the house. You can’t escape it. He dictates like he’s on the anchor desk.”

“Maybe so,” agrees Dave, the son of a Huntsville Baptist preacher. The newshound exorcised his Texas twang early on through vocal cord stretching exercises. One has to wonder if whistling helped too. “He can whistle anything,” says Laura. “Perfect pitch.”

The community icon turns 79 next month, but the word “retired” isn’t in his vocabulary.

“He’s back physically 100 percent,” says Laura of her husband, who had a heart attack in November 2016, just months before leaving Channel 13. He underwent an aortic heart valve replacement and double bypass surgery. Three months later, surgeons inserted a pacemaker to ensure normal heart rhythm. “The doctor considers him to be recovered, and Dave certainly feels that way,” his wife says. “He’s back doing all the things he loves to do.”

In addition to speaking engagements and a yet-to-be announced project he’s eagerly pursuing, the former anchorman is writing a book about his life and career, something he promised viewers. Jim McGrath, President George H.W. Bush’s post-White House spokesman and speechwriter, co-authors.

Dave doesn’t lack material. This day, he rattles off memories with savant-like recall. Fun facts are sprinkled about like candy toppings on a cupcake.

Here’s a taste. Dash Crofts of the band Seals & Crofts, the soft-rock singer-songwriter duo of the 1970s, was his best friend and band buddy in high school in Cisco, Texas. He’s got the skinny on why Darrell George Crofts is called Dash. “He has a twin, his sister Dorothy. They call her Dot, so, it followed….” 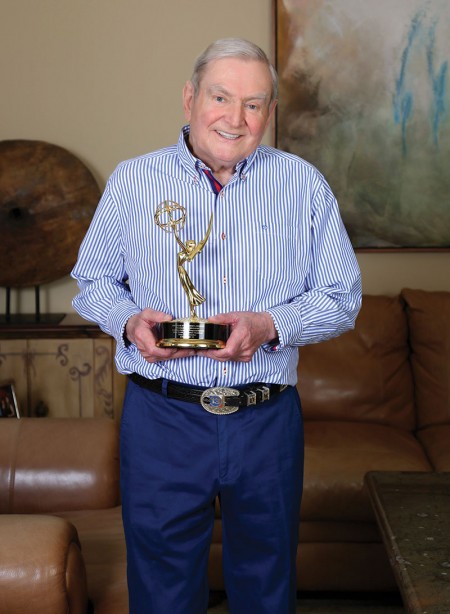 AND THE WINNER IS Dave’s profile of singer-songwriter friend Steve Tyrell won him a 2007 regional Emmy. (Photo: lawellphoto.com)

And he’s been friends with noted singer-songwriter Steve Tyrell since the 1960s. Trumpet-playing Dave and his fellow Houston KNUZ radio staff recruited Tyrell to play with their cobbled-together Seven Southern Gentlemen band.

“We sounded terrible, just garbage. Steve came in and made us sound good.”

That friendship led to a regional Emmy for Dave, who profiled Tyrell’s career. The Emmy statuette sits on the Ward’s living room mantle.

“One time, Marvin was in a tirade about something, and he bangs the set and says on air, ‘It’s time somebody grabbed the bull by the tail and does something about this!’” Dave recalls. “I said, ‘Well, thank you, Marvin. Now friends, having a bull by the tail is not to be confused with having a tiger by the horns.’ Marvin fractured every cliché he could.”

“Dave has the best stories about Houston and its people,” says Laura, who is intimately connected to the city as CEO and president of the Houston Children’s Charity, a non-profit organization that helps underprivileged, abused and disabled children. Dave, on its advisory board, emcees their annual gala.

“I couldn’t live without my cell phone. I’m on it 24/7,” says the crackerjack fundraiser.

Dave was stunned to find that Crime Stoppers of Houston, the non-profit crime tip organization, named its new headquarters at 3001 Main St. after him in recognition of his help establishing the program.

“But I knew about it for a year,” quips Laura, who raised funds for the building and secretly compiled photographs and all manner of memorabilia for a Dave Ward tribute wall in its lobby. “I was blown away,” says Dave.

The candy jar he routinely stocked with sweets at Channel 13 resides there too. News staff used to swarm it like proverbial bees to honey.

The couple smiles recalling how they met. It was 1989, and Laura called Dave cold turkey to see if he’d emcee a fundraising event featuring the Gatlin Brothers. “He did, and then every year after that I called him to emcee.” That professional relationship turned to romance several years later after both had divorced. They married in 2002. Between them, they have seven grown children and five grandchildren, with Elliott, 2, and brother Zayde, 9 months, the latest family additions.

“It’s a joy,” Laura says of the grandkids. 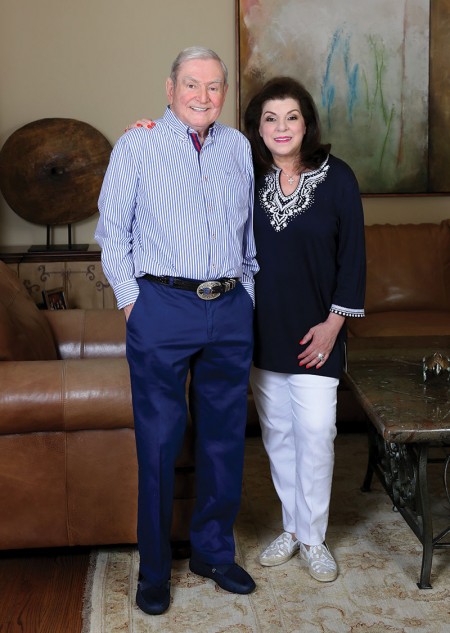 Another of Laura’s joys, cooking. She takes to the kitchen on Sunday, her only free day, since she’s out most nights fundraising. One of nine siblings growing up in Louisiana, she learned to cook “for an army.” Dave dines in most weeknights, feasting on things like her  “famous” fried chicken, black-eyed peas and roasted corn.

Without fail, he hits Le Peep restaurant not far from their house for his first meal of the day. He treated a loyal viewer to a meal there recently. The woman had reached out, expressing how much the anchor meant to her and her father who recently died.

And, of course, daily routine includes watching the news, “flipping all three channels, not just Channel 13,” says Laura. “I’ve got to tell the truth here,” says Dave, noticeably irked, “when I was there I’d tell our reporters, ‘Never refer to what we do as a show. We don’t do a show. We do a news broadcast or news program.’ They call it a show all the time now.”

He twirls his black BIC pen in his right hand as he says this, a nervous habit from early radio days. “He can pop that pen out and start doing that and doesn’t even know he’s doing it,” Laura says. Which leads to the subject of shirts. Always with a pocket. For the pen. Even when wearing a tuxedo, there must be a pocket for the pen.

And for those who think Dave emerged from the womb wearing finely stitched Lucchese boots, he has discovered the world of casual shoes. “Never thought it would happen,” Laura says. “But he will always love his boots.”

He has started to embrace social media too. This is a man who didn’t get a cell phone until recently and only because his wife said she could download a solitaire app on it. “So, it’s been a process,” she says.

The history buff has always worn a small American flag pin on his suit lapel. He recently donated his library of 350 World War ll books to the Michael E. DeBakey Veterans Affairs Medical Center. The books, autographed by Dave, contained a message of thanks. “I guess you could say my World War ll fascination is a kind of hobby,” says Dave, who admits an obsession with the History Channel, Smithsonian Channel and black and white Turner Classic movies. “I love anything about World War II.”

“When I was a child, all I wanted to do was grow up to be an engineer on a steam locomotive. I love being on a train. I’ve often said I don’t care where it’s going as long as I can be on it.”

A train trip on the Venice-to-London Orient Express one summer left her less than impressed. The train was beautiful, yes, but not air-conditioned. “I watched her face turn six shades of white when our steward Matthew told us there was no air conditioning.”

A horse-drawn carriage works though. She accompanied Dave, grand marshal of the recent Houston Livestock Show and Rodeo Parade, as the caravan passed adoring Houstonians downtown, an “unbelievable honor” after working it for decades from the sidelines, he says.

“I just love this city. I am so grateful that Houston gave me the opportunity to do the job I did all those years. I have my loyal viewers to thank.” He recalls a passage from Walter Cronkite’s book A Reporter’s Life where the legendary broadcaster refers to an encounter during post-CBS years.