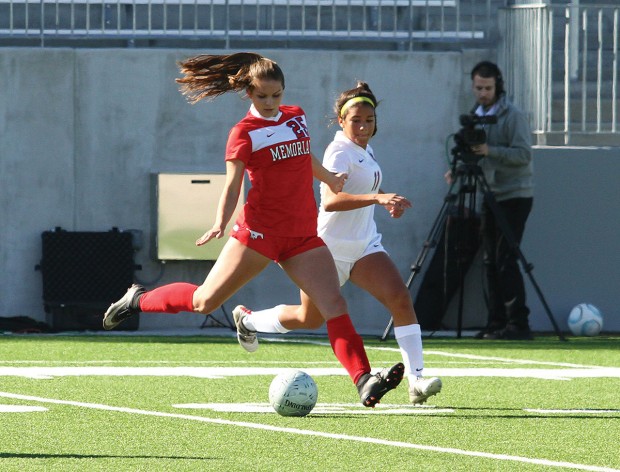 GOAL ORIENTED As the team leader in goals scored, Memorial senior forward Mary Grace Sullivan has helped lead the charge for the Mustangs soccer team this season. Memorial opened the year with an impressive eight victories and one tie in its first nine games. (Photo: Kelly Rives)

With eight wins and one tie in their first nine games, the Memorial Mustangs had a great start to the girls soccer season. The early-season victory total included wins over defending Class 6A state-finalist Katy Tompkins as well as a championship bracket victory in the prestigious I-10 Soccer Shootout. In addition, the Mustangs posted a big district-opening victory over perennial power Klein Oak.

“Our girls are close friends and have a tremendous bond on and off the field,” said Mustangs head coach Lindley Amarantos. “They’re extremely committed to playing hard and putting their best foot out there come game time.”

Among those putting their best foot forward is senior forward Mary Grace Sullivan, who leads the team in goals scored. “She’s playing with a big passion and just finishing her plays,” said Amarantos. Plus, with 10 of 11 starters back from last year’s playoff teams, Amarantos says, there have been major contributions from a number of players, including senior midfielder Grace Yochum, senior goalkeeper Bella Killgore, junior forward Grace Collins and sophomore center midfielder Kelsey Hranicky.

“Grace is a really creative player who creates a lot of opportunities for her teammates,” said Amarantos. “Bella is a great leader who organizes our defense, while Grace Collins leads us in assists, and Kelsey is extremely consistent and dependable. Our goal is to win a district championship and even make it to state.” 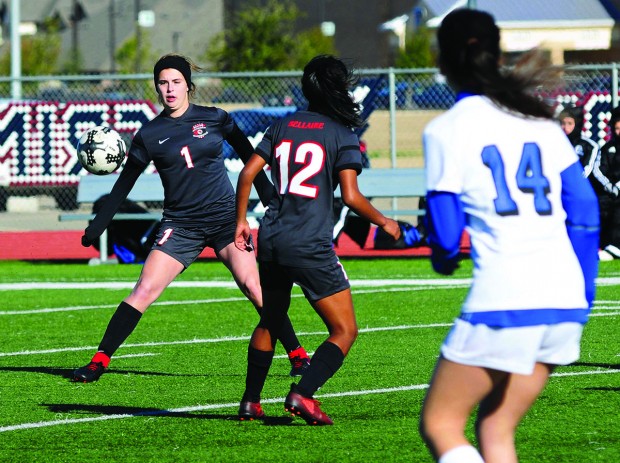 SOCCER SENSATIONS Bellaire Cardinals senior captain Allie Schachter (#1) is again the driving force for the Cardinals soccer team this season. The district MVP has signed to play at the University of Pennsylvania. Also pictured for Bellaire is standout junior forward Jasmin Garzon (#12).

With a senior-dominated lineup, the Bellaire Cardinals girls soccer team was the strong favorite to capture a fifth straight district championship. In fact, Bellaire didn’t even give up a single goal en route to winning last year’s district title.

As for this year, Bellaire began the season with a breakthrough victory by beating perennial powerhouse Cy Ranch 1-0 in a non-district matchup. “They were the defending district champions of one of the best districts in the region, so that was a huge win for us,” said Cardinals head coach Alan Thompson. “For us to beat great teams in non-district gives our girls the confidence that they can make an impact in the playoffs. We still haven’t gotten over the hump of winning in the playoffs, but our primary goal is to be successful in the post-season. Hopefully, this is our year.”

It had all the makings of another big year for Cardinals senior Allie Schachter, who signed to play major collegiate soccer at the University of Pennsylvania. “Allie is just a tremendous player,” said Thompson of the returning District Player of the Year. “She’s a strong competitor who just elevates her teammates’ game by just how hard she works.” In addition, Thompson had high praise for junior forward Jasmin Garzon and senior captain Elidaisy Ortuno. “Jasmin is a really strong attacking player who’s pretty fearless. Defensively, Elidaisy anchors us in the back. She gives us a tough defensive presence.”

Deep into the girls basketball season, the St. Agnes Tigers owned a 25-7 record and were ranked fourth in the state among all large private schools. Making the victory total all the more impressive was a strong third-place finish at the Tampa Bay Christmas Invitational, which included a field of ranked teams from across the nation. “We beat some really great teams at that tournament,” said Tigers head coach Jeff Hollinger. “It really solidified the kind of team we have this year.”

In district play, the Tigers also defeated a pair of highly ranked teams in Tomball Concordia Lutheran and Houston Christian. It also marked the first time in four seasons the Tigers had defeated Concordia Lutheran. “I think the difference in our team this year is that they feel like they should win every game. It’s a confident group that loves to run and press the entire game. They do it well.”

Among those playing extremely well is junior point guard Madison Lucas, who leads the team in scoring with 11 points a game. Junior Emily Nelson became only the fourth St. Agnes player in Hollinger’s 12-year tenure as head coach to surpass the 1,000-point-career plateau. In addition, senior post player Jade Evans averages a double-double, with 10 points and 10 rebounds a game. Another top scorer for the Tigers is junior forward Katie Dickerson, who averages 10 points a game. “We have three juniors who were on varsity as freshmen,” said Hollinger, “so they play extremely well together.”