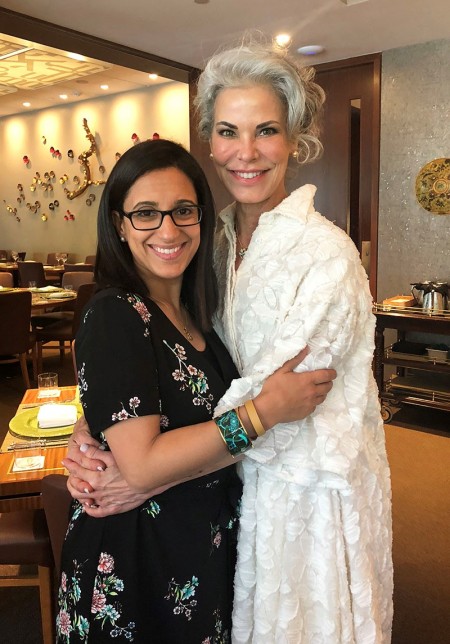 I was heading into a “hat themed” birthday party for one of our Leading Women for public safety, Sippi Khurana. Walking into Kiran’s, I saw Harris County Judge Ed Emmett and his lovely wife Gwendolyn enjoying a quick meal. He looked at me in my work clothes and then peered into the back room where the function was being held - Are you going in there? He asked. Looking down at my overflowing work bag and with no fabulous hat on my head, I said, Yes, I am.

Good luck! He said. Those women are dressed to the tee!

In my few steps from his table to the open area in the back, I scanned the room. These women were perfect. My mind raced: I’m a mother of three, running from place to place. Just be thankful you have two matching shoes on… I’m barely making it!

Once in the room, one woman caught my eye immediately. She was statuesque, in an off-white dress with a vintage off-white hat. She was older than the rest and had an air of elegance that drew you to her. I immediately thought: This woman has a story.

We said hello and standard introductions were made. Sure enough, upon hearing that I ran Crime Stoppers, she took a step back and within moments, her story broke. When she was just 22 years old and six and a half months pregnant with her first child, her beloved husband, Tom Cohen, a well-known and liked Houston jeweler, had been targeted, followed and eventually murdered during a Sunday at the office. Tia Neyman learned that her husband had been shot while she was at a family event in Plantersville, Texas. She was driven back to Houston where the one and only Dr. Red Duke broke the tragic news to the young mother-to-be. Tom had died on the table. That was May 1981 and he was only 25 years old. She went on to share an affection for our organization because it was a tip to Crime Stoppers that led to the capture of her husband’s killer.

I hear stories of Crime Stoppers’ impact daily but I nearly had to pick myself up off the floor with this one.

Over the next hour and over the next few days, I learned more about this beautiful mother. Now nearly 60 years old, she reflected on her life following that tragedy, dealing with such loss, especially at that unique time in her young life. She shared that while a part of her “was buried in that casket with Tom forever” she remembered thinking of her pregnancy and the baby about to be born into the world. Everything became about that child.

With the support of her family and the fashion community, Tia moved into the Montrose fixer-upper her husband purchased in preparation for their expanding family. Not knowing how to execute the renovation plans on her own, her fashion friends stepped in to help. Within one month of giving birth, she was back to work, walking the runway at a Carolina Herrera show. Where did her strength come from, I asked? There was no other option, no plan B. Her new life was to be about her life with her beautiful little girl Scarlett.

This flawless woman, someone you look at and instinctually think she must have it so easy shared story after story about navigating the tough world of fashion and modeling during a very different time for women in that industry. About how years later she got remarried to a wonderful man named Jempy Neyman, a graduate of the Air Force Academy and who eventually went to work for a little-known company named Enron. “He was one of the good guys,” she said and went on to become the CFO of a publicly traded energy company. In time, she had another child, Mia, but life didn’t necessarily get easier. Tia was diagnosed with a rare genome of Hepatitis C, a version that was not responsive to normal medical practices. With the love and support of her new husband and family and, of course, leaning on her own incredible strength, she focused on living for her family and after going through an experimental treatment, she was eventually cured. Through it all, she never missed a work or a family event.

Today, Tia still owns her jewelry company Tiamiajewelry.com. While she is retired from the day-to-day work, she stays very much involved. She is an avid dancer, studying ballet and focusing on supporting charities and underserved populations.

So why do I write about her? Because as mothers, we all, from time to time, struggle to carry our own loads. We get lost under the weight. We lose touch with ourselves and the person we used to be. Life becomes about everyone else but you, and you get tired. I get those feelings because I’ve felt them all myself.

But in hearing Tia’s story, I was reminded that we are not alone, that we all have loads to carry, that there is never room for self-bullying or thoughts that “the grass is greener” or self-pity because we got the short end of the stick. Whether you’re the mom who has it all together or a mother who’s learning her marriage is coming to an end, or a mother dealing with a recent cancer diagnosis or a mother dealing with a recent learning disability designation for her child (I could go on and on) . . .  Tia walked into Kiran’s as elegantly as she walked out but through it all, was an overwhelming reminder that life is hard but mothers are powerful and resourceful. And when we need it,  we are supported by a never-ending network of sisters that we can lean on and learn from. In my book, that’s the best gift for this mother on this very special Mother’s Day.