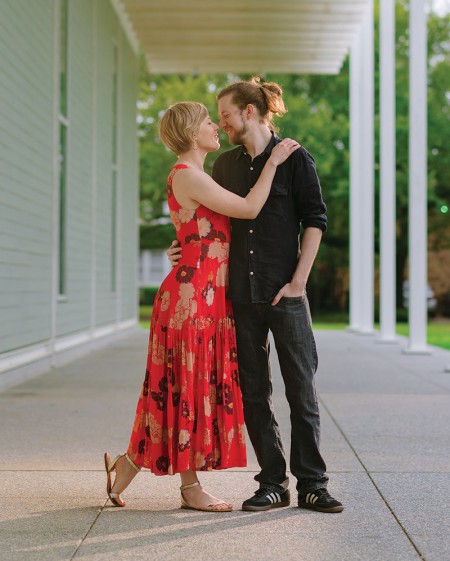 I DO! Video-game designer scores a new player. (Photo: www.stephenhuynh.com)

About a decade ago, I wrote a Buzz story about a Bellaire boy who became the envy of any neighborhood kid with even a passing interest in video games. I really didn’t know Andy Gentile that well. He was in third grade with my daughter Laura, at Horn Academy. She spoke passingly of him as a smart boy whom the teacher liked. I kind of suspected Laura didn’t disapprove of Andy either.

My heart always ached a little because I was aware that his mom had passed away when Andy was only 3 and his brother Chris was 5. Still, he seemed well adjusted, with friends and great reviews from the moms of his buddies. I would occasionally run into his dad, Phil, on Horn Field Days, always smiling and friendly. He seemed like an upbeat guy, trying to do a good job as a single dad. That was about all I knew.

In high school, my two daughters went to HSPVA, and Andy went to Bellaire High School. But we would hear stories about Andy in carpool from his friend and fellow Horn alum Joe Delmore. Andy was the recognized drummer, skateboarder and video-game kingpin of the neighborhood.

Online, Andy’s kingpin status as a gamer reached well beyond the neighborhood, to the world, so much so, that he caught the attention of the game makers themselves.

The summer after his junior year, Andy and his laptop were invited to California by a company called Neversoft, makers of the Tony Hawk video-game series. The company noticed Andy playing online among the top, internationally. This had prompted game-development staffers to reach out to him online, seeking feedback on the top levels of their games. Andy was offered a summer job at $8/hour plus free room and board at a hotel within walking distance of Neversoft headquarters in Woodland Hills, Calif., near Los Angeles. Here, he would play video games at the top levels while staff would stand around and watch, looking for ways to tweak and expand the game from there.

When his dream summer ended, Andy returned home for his senior year at Bellaire High School.  Then, with friends waiting for their college acceptances, Andy accepted a job offer at Neversoft that extended into seven years. He worked his way through the company, absorbing the technical and the business sides, and then ventured out for a stint at a company called Tapulous before making his move as an independent game developer.

With game credits like Tony Hawk, Pro Skater and Guitar Hero, Andy landed a publisher. That means somebody thought he was a good enough risk to give him the financial backing to create his own game. Andy became the lead designer, hiring a team of three other designers. None of them lived in the same city. But on short notice they would all plop down into their own virtual space together and work on the game. Epic Skater came out in August 2014. It was featured prominently in app stores, leading to over 2.2 million installs in the first two weeks of the release. Today, Epic Skater has over 11 million installs.

Andy decided it was time to come home to Bellaire where his dad and brother still lived. “Since high school I was like a workaholic,” he said. “I was ready to come home.”

Andy reconnected with childhood friends. One day, I received a selfie from my oldest daughter, Laura. She was at a dinner with her old classmate, Andy. Something on Andy and Laura’s face registered chemistry.

After a respectful three years of dating, another notable selfie came through. This time it was a picture of Laura’s hand with a red, diamond-shaped Ring Pop on her left ring finger. I later learned it was taken on the Horn Academy campus, during a recess break, with an audience of current Horn students who cheered while peering through the fence.

On April 1, 2017, no joke, they were married at The Grove in Discovery Green. Andy played the drums with the band (as he has in video games too), offered a pair of his signature red sunglasses to everyone at the wedding, and wrote in the vows that he was allowed to play video games two hours a day.

Just weeks before their first anniversary, Andy and Laura announced the birth of … Epic Skater 2.  I’m a grandmother! Of a video game.