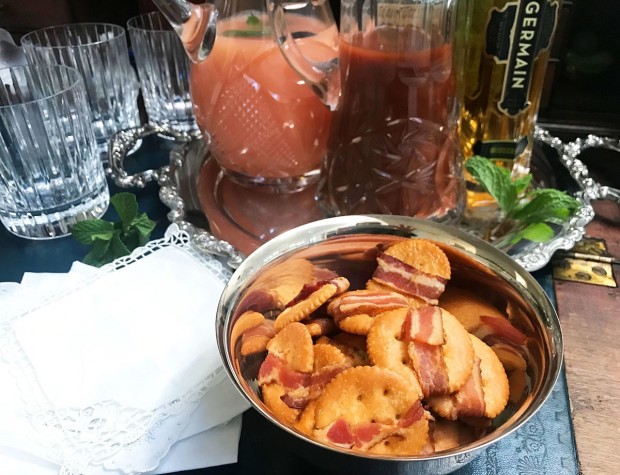 These addictive Bacon Crackers are a delicious snack to serve with drinks during gatherings.

While the whole country is talking turkey, dressings and pies this week, we’re still going to need a bar. And bar snacks.

And even on top of all the once-a-year favorites we get to make this week – all of which I really love to make – the bar snack is where I get abnormally excited. That’s because our bar snacks, for me, are right up there in nostalgia with your green bean casserole.

Growing up, our house was always the one with people in it. My parents’ motto was – still is – “the more the merrier!” Which is why I’m prone to invite people to join plans willy-nilly, which sometimes gets me in trouble, which is yet another story.

But back to having people in and out growing up. In addition to the revolving door bringing spontaneous visitors, I remember my parents giving a lot of parties. I don’t remember much about what they served, except for one thing: Bacon Crackers. Or maybe they should be called Crack Bacon. I don’t know.

Fast-forward 30 years or so. The bacon crackers were still swimming in the back of my mind, but at this point, they seemed so retro, so 1982. And who actually eats Ritz crackers anymore – with bacon on them? A few Thanksgivings ago I decided to stop listening to that anti-sugar/butter/gluten boring voice in my head. I wanted my kids and their cousins to know the joy of bacon crackers.

So I made them for the kids (okay, also maybe to go with the Bloody Mary and grapefruit-vodka-St. Germain bar that the grown-ups would be enjoying). And I couldn’t keep them coming fast enough. “Addictive” doesn’t quite describe how yummy these are: crisp and smoky bacon wrapped around buttery crackers that have soaked up all the bacon drippings.

Once again, bacon crackers are now a staple for us, albeit once a year. While turkeys are cooking and people are visiting late Thanksgiving morning, bacon crackers get passed around and gobbled up. Fast. Last year they were such a hit that I brought some to a Christmas cocktail party. I used little Keebler Club Mini crackers (which was a mistake because think about cutting all those tiny pieces of bacon then wrapping them around the tiny crackers) and brought them in a large-ish silver revere bowl to dress them up. I am not kidding when I say they were gone before everyone could reach the buffet.

Bacon Crack, I tell you. Please do not curse me.

Preheat the oven to 300 degrees. Line a sheet pan with foil and place a wire baking/cooling rack on top of the foil. Cut each bacon strip lengthwise, and then cut each of those long strips in half, making four rectangular strips. (I like to do this with kitchen shears.) Wrap each cracker with a strip of bacon, and arrange the crackers on the wire rack. Bake for about 1 hour, or until the crackers are golden and the bacon crispy. Let the crackers cool a bit; they will crisp up as they cool. Serve as fast as you can, and try not to eat too many!