Memoir of a Romance 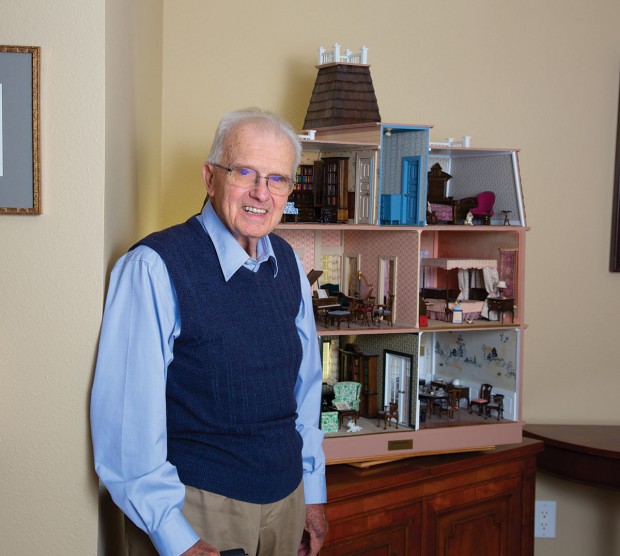 MINISTER & MINIATURES Charles Wolfe relaxes in his living room, the dollhouse he made for late wife Helen in the background. (Photo: lawellphoto.com)

Charles Wolfe, 87, reaches into a tiny peach-colored bedroom for a thimble-sized coffee mug, pointing out the wording on its center.

A name that means “shining light, the bright one,” states Greek etymology.

“She was a spectacular woman. Everyone loved her,” he says of his late wife, she of the name on teensy cup. A succession of miniature poodles the couple raised is even more miniature in this abode, a three-story, eight-room Victorian dollhouse Charles built for Helen in the 1980s. It sits in his living room at Brookdale West University senior living, tiny windows into more than four decades of marriage.

“Ours is a pretty neat story,” he says, a smile creasing his face.

In April 1967, war raging, the 36-year-old Presbyterian minister felt a calling to go to Vietnam. As Army chaplain to an engineering battalion, the divorcee and father to four sons became a steady hand for young men facing the chaos of war. He crawled into machine gun nests at night to pray with them, share a cup of coffee. Calm their nerves.

On the other side of the world, Helen Bickel, 34, a tall brunette with a scholarly bent, labored over her dissertation, Women’s Work Values, at the State University of New York at Albany. Statistics in the paper presented a snag. Statistician and fellow doctoral student Lee Wolfe offered to help. How could she repay his kindness?

“Send a care package to my brother in Vietnam,” Lee replied.

A package of cigarettes, peanuts and other goodies arrived one day at the Can Tho Army Airfield in the Mekong Delta, south of Saigon, an area laced with rivers, rice paddies and patches of dense jungle. It made its way to a makeshift office in a walled-off space in a storage shed, into the hands of Army chaplain Wolfe.

“So I get this package from a stranger in New York. Then a couple of days later I get a letter from her explaining why I got it, and I send her a thank-you. And she sends me a thank-you for my thank-you, then I thank her for her thank-you to my thank-you,” Charles chuckles, eyes dancing at the memory.

Fingers flew on his manual typewriter. Tap. Tap. Tap. Ding. Musings from an Army chaplain in a war-torn land. He told her about the culture, the food. About the time a mortar shell hit a 30-pound bucket of grease and men used “elbow grease to scrub the grease off.”

A paper trail of Vietnam experiences stamped and bound for Helen in Albany, New York.

Sometimes he included a gift. A Vietnamese dress. A purse made of water buffalo hide. 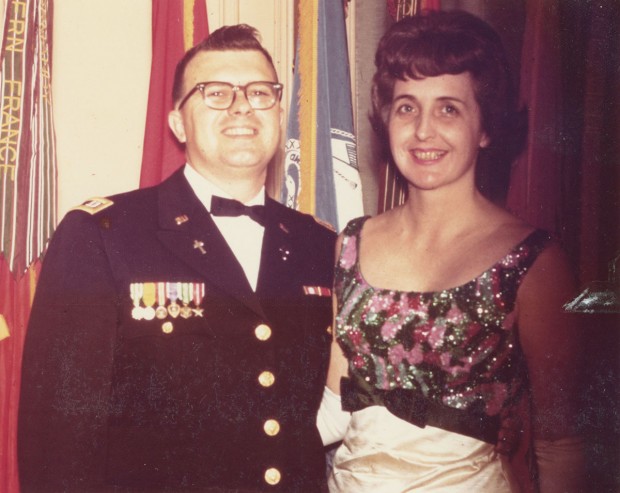 Charles and Helen, pen pals while he was an Army chaplain in Vietnam, are all dressed up for their first formal military affair together.

Progressive-thinker Helen was equally forthcoming about her world, writing of feelings and ambitions. She’d been a teacher, then got her masters in counseling at Cornell University. She was working hard at a doctorate degree in student administration with a focus on counseling.

They wrote about their joys, their concerns. Life.

“If you know you’re never going to meet somebody… I mean never going to meet them, and you’re both literate, you can get to know them better in letters than you can face-to-face,” explains Charles. “And so, we are hanging ourselves out to dry, sharing and sharing, because we both know we’d never meet each other.”

Letters continued, heavier stuff along with the mundane. Like the time Charles was injured by mortar shell during the Tet offensive, a month-long coordinated attack by the North Vietnamese and communist Viet Cong forces against targets in South Vietnam. The blast catapulted him into the air, slamming him hard onto pavement. Shrapnel gouged his lower leg.

“It’s one of those things where just a few inches one way or another and I could have been killed,” Charles says. “So I’ve always felt that God expected me to do something in return for that, for getting a little extra life span.”

Fate intended his life to include Helen Bickel.

On leave in Singapore, just three months before his deployment was to end, he “rolled the dice” and made a collect call to the woman he knew only through a picture and words on a page.

“I told her, ‘I didn’t know if you were going to accept the charges.’ If she hadn’t, that would have told me that we were just pen pals, nothing more. When she accepted, I thought, ‘Who knows where this could lead?’”

By the time they met, they already knew each other’s flaws and strengths, fears and hopes. It’s as if they’d been courting. Conversation flowed where letters left off.

They were the perfect scholarly duo. He, a minister and academic, an expert translator of ancient Biblical Greek. She, a staunch advocate of education and women’s rights.

“They were a good fit,” says eldest son Chris, a Houston corporate attorney, of his dad and stepmom. “But there were some pretty funny differences too.”

“She definitely ran the household. Every time I’d go to their place Helen would have a long list of items to fix around the house. I remember once she asked me to hang a towel rack and she said something like ‘I sure wish your dad knew how to do things like this.’ I said, ‘But he can translate from ancient Greek.’ And she said, ‘But I need towel racks up much more frequently that I need ancient Greek translated.’”

Helen was a bit more reserved, Chris adds, “and dad can chat up a stranger.” He has written a book about his dad titled The Pastor, a recount of Charles’s life for family. 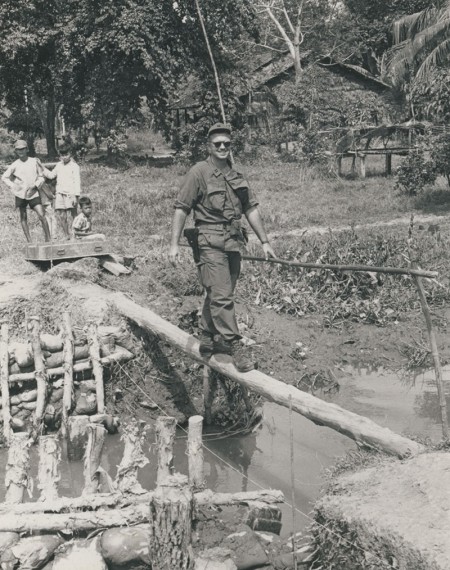 Charles makes a chaplain visit to an engineer squad in Vietnam’s Mekong Delta in the winter of 1967.

Theirs was a happy marriage with mutual respect for each other’s careers.

Helen held posts in New York state government, including deputy director of an education agency under Governor Nelson Rockefeller. She gained notoriety for a groundbreaking study on inner city schools in tough neighborhoods.

She became national head of the American Association of University Women (AAUW) in Washington D.C., a private organization that empowered women with leadership skills, networking opportunities. She was a progressive champion for women, toiling for equal rights.

And on one of the most memorable days of her life, save the day she met Charles, she was called to the White House to witness President Jimmy Carter’s Oct. 20, 1978 signing of an extension to the Equal Rights Amendment.

Carter gave her the pen. Charles treasures it to this day.

“She was also advisor to the commandant of the U.S. Marine Corps on matters of marine education,” Charles says proudly, joking that at one time she was his boss. “She was dean of the graduate school at Western Maryland College, now McDaniel College, where I spent some time as an adjunct professor.”

Charles is no slouch himself.

He had 23 years in the military between active service and time in the National Guard.

While Helen worked for the AAUW, he received his doctorate at the Wesley Theological Seminary in Washington D.C. The first half of his career, he was a Presbyterian minister, switching to Methodist after doctoral studies. He combined ministry with a passion for academics and authored half a dozen books, guides to interpreting the Bible. He published sermons and edited a magazine with a minister audience.

With age setting in and careers winding down, the couple had planned the move to Houston from their Baltimore home. But Helen succumbed to pancreatic cancer in March of 2013 at age 79, just two weeks before the scheduled move. “It was so unexpected and sudden,” Charles says. “Everything was a blur. I can barely remember how I got here.”

“His home’s sold, his wife’s gone, he’s moved from his hometown. It was a massive shock,” says Chris, who lives a mile away from his dad. “He was trying to understand why he was alive and Helen was dead. He was grappling with that and wasn’t sure what he was supposed to do with the rest of his life.”

The minister found salvation in travel.

“It was my new lease on life,” he said of doing one-on-one trips with his grandchildren to all corners of the globe. Charles has 13 grandchildren, 8 great-grandchildren.

“It became his mission,” says Chris.

He’s cruised around Cape Horn in the southernmost tip of South America and snorkeled in the Galapagos Islands. He’s seen Belgium and Holland and paid respects in Auschwitz. He’s been to Costa Rica, Germany, Panama, Guatemala and on a Caribbean cruise.

And he’s found new companionship in the form of Rita Carlson, a widow once married to a Lutheran pastor. “She’s a young squirt at 84. Vibrant. A great sense of humor. We get along well,” Charles says. They recently took a Mississippi river cruise.

“I told dad recently that I didn’t think it’s a good idea for him to travel abroad anymore with language issues and the need for quality, consistent medical care,” says Chris. “He said, ‘You’re telling me I can’t leave the United States?’ I said, ‘Yes, but most people don’t consider that a hardship to be told you’re limited to the Continental United States.’”

Charles is taking those travel restrictions and running with it.

He recently returned from Washington D.C., one of 32 Vietnam veterans selected for an Honor Flight Houston trip to see military memorials and monuments. The Honor Flight Network has flown over 159,000 veterans to the memorials since 2005.

When they returned to Hobby Airport, a crowd was there to cheer them, a brass band playing. “We thought we were tough old birds, but not so tough that we didn’t cry,” says Charles. “That trip brought back a lot of memories.”

No doubt of his time as an Army chaplain and a pen pal named Helen.