Memo to the world at year’s end 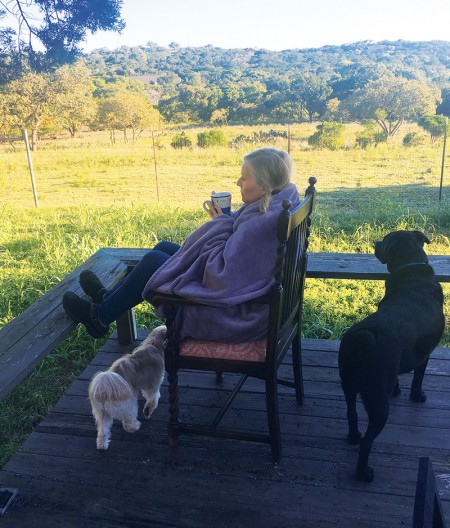 ALL IS CALM Writer Cindy Gabriel contemplates the days after Christmas from her “maintenance-deprived house” in Hunt, Texas.

My favorite time is always that quiet week between Christmas and New Year’s Day. I tend to migrate to about five acres of cactus, deer and rocky soil that slope to a dry creek bed, which once was a spring that fed the Guadalupe River. Now it serves as a deer trail to the backyard of my maintenance-deprived house in Hunt, Texas.

It belonged to my dad and was worth less than he owed when he died. As the only child living in Texas, I accepted it as a peace offering in a contentious probate situation.

While it would have made the most sense to unload it quickly, I kept it, stripped it of routine expenses like cable TV, the Internet, telephone and, reluctantly, that nice guy who kept Dad’s deer feeder full of corn.

That leaves cell phones, running water and electricity. But, essentially, Hunt is a place to unplug. I’ll call it “Amish-lite.”

It took some getting used to, for sure. But in time, a sacredness emerged in the silence.

When I invite people there for the first time, I sense their hesitation. It’s like I’m inviting them into outer space, as if a house without cable or the Internet is not capable of sustaining human habitation.

But when it’s time to leave, they inevitably say: you know, I didn’t miss TV at all. “This place has a way of casting a spell on you,” someone said.

In my retirement fantasy, this is where I will write.

Speaking of fantasies, what if some person of no particular importance wrote a memo that ended up going viral.

Of course, the whole world wouldn’t instantly heed it because you need conflict to make it a good story. But a good chunk of us would, and that good chunk would have a decidedly positive impact on this tired old world. Maybe something like this:

OK, everyone. Listen up. Let’s all agree that for one week, let’s say, between December 25 and January 1, we remove all unnatural noise. No TV, planes or cars. You can ride a bike if you’d like. Talking is allowed, but less of it is encouraged, as listening increases in silence. Singing, violins, harps, flutes, chimes and any musical instrument that doesn’t have to be plugged in are encouraged. Electricity is allowed otherwise.

When it comes to music, the lack of amplification will encourage smaller, more intimate gatherings, perhaps of a circular nature.

Hospitals may stay open and emergency vehicles can operate. But sirens won’t be needed because there won’t be traffic.

This will be quite an adjustment for our overstimulated minds and body impulses. Some of us will immediately feel like climbing the walls, while others will have a wave of inner rebellion at times, then feel it subside as the body adjusts and detoxifies.

The other thing I would put on the back burner is the clock. It would be necessary to use since there may be more time to catch up with people and plan to meet some place in an hour. But, I’d like us to do less scheduling and leave a little more room for spontaneity.

So how will this be covered by the news media? Well, freedom is freedom, so they will do what they wish. But hopefully their reports will remind us of moments when we actually did come together momentarily, such as the two weeks after September 11, when people of all religions sat in stunned silence to the words of Dr. Billy Graham, or when people from other countries cried and trembled while wrapped in American flags. How quickly we forget that even Congressional leaders from opposing parties stood on the steps of the Capitol, holding hands, and looking like they really meant it.

Another moment of reporting I appreciated was the total solar eclipse in August 2017. I envied those who were there for the direct experience, but television and Internet streaming provided a great moment of shared experience that brought the country together for those moments of complete silence and darkness.

Whenever I think of selling Hunt, I recall that it is along the path of where the next total eclipse is scheduled to occur on this continent. April 8, 2024 is the date. I looked up the path just now, and Hunt is not just along it; it’s smack dab in the center of it.

Funny how nowhere can suddenly look like somewhere if you are paying attention beyond the noise. My unborn grandson will be about 6 by then, God willing. He’s scheduled to arrive in the middle of my favorite time of year, on December 28.

Maybe someone will write a memo, and the world will be better by then.

People in this article:
Cindy Gabriel
Tags:
Getting away, Unplugging