Small is the New Big

A life form has entered the planet 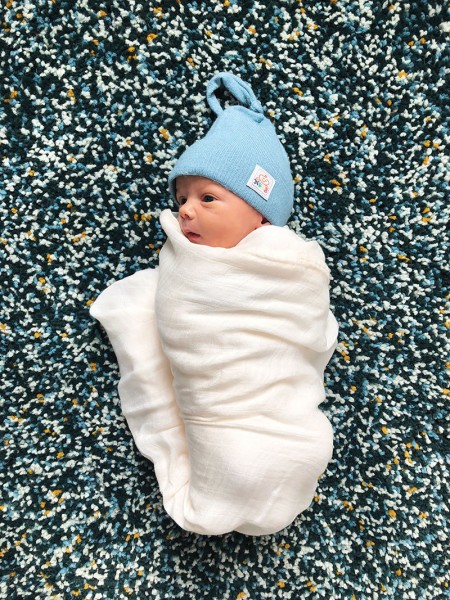 We interrupt this regularly scheduled column to bring you this bulletin. A small but significant – make that magnificent – creature has entered Earth’s atmosphere, as the first known grandchild on either side of the Gabriel-Weber family. We reserve the right to stop you in the grocery store and shamelessly show pictures, as we try to put words to this phenomenon of yet-unknown proportion.

This fresh-from-heaven creature seems to have brought a piece of it with him, as we rearrange ourselves in the fount of his presence. Whatever this is, it has found something deep in each of us that has been waiting to arise, along with him, to puffy marshmallow clouds, as we dance and play in a strange new place called Grandparent Land.

So much more has been born in this tiny package than one person. Eli-the-Guy has spawned new parents, four new grandparents, aunts, uncles and other kindred spirits who will be added accordingly to his infant, but expanding world.

We are allowed to sit, gaze, cuddle and just be, without feeling like we should be doing something else.  He is so human, and yet so pure and un-labeled. He is us, without the artificial add-ons.

Authentic. Not worried or self-conscious. Diaper withstanding, he has the cleanest record in the family.

We are the ones who need help.

Already, little Eli has this habit of putting his right hand up around his temple, as if he’s shielding himself  from the passing, the gazing and cooing, while he pulls himself together.

Take it from me, little Eli, this human being thing is not easy. Your grandparents have been here a long time, and we are still trying to get a handle on it.

I was a wreck before you got here three weeks early. What? My Christmas baby is coming December 7th? The Day of Infamy? Maybe that’s why I – yes, I, your grandmother – was throwing-up with a headache the night before you were born. Here your sweet mama is awaiting the most monumental moment of her life, and it’s suddenly all about me.

And while you aren’t the first baby to come into a home without a working dishwasher, a part has been ordered, and it will eventually arrive. When your papa went home to check on it, he discovered no electricity in the front half of the house.

I can’t tell you how little all of this mattered, given the most amazing gift of your sweet perfect selfness that has been bestowed upon us. Those cushy clouds seemed to float down among us and buffer all the usual uncomfortableness of so-called real life.

When it was time to pack you up and take you home, your papa looked puzzled. Where were his keys? We still don’t know. You had to come home in Mama’s car because Papa’s needed to be towed from the hospital.

No wonder your hand reaches for your forehead; you are beginning to sense what awaits you. You’ve got a crew of beginners here. If ever there was an alpha child, you are it. We have much to learn from you.

But the good news is, you are not alone. Every day, it is becoming increasingly apparent that we are not the only people experiencing this strange phenomenon. It seems that bundles such as yourself arrive in great regularity.

It seems that even before this happened to us, it has been happening to other people we know for a long time. We wondered why they did strange things like move to other states to be with their grandchildren, and turn down the annual Christmas gatherings to babysit.

Now, I’m suddenly seeing babies dropping from heaven like snowflakes. To think that this has been going on all along. I have clearly been paying attention to the wrong things.