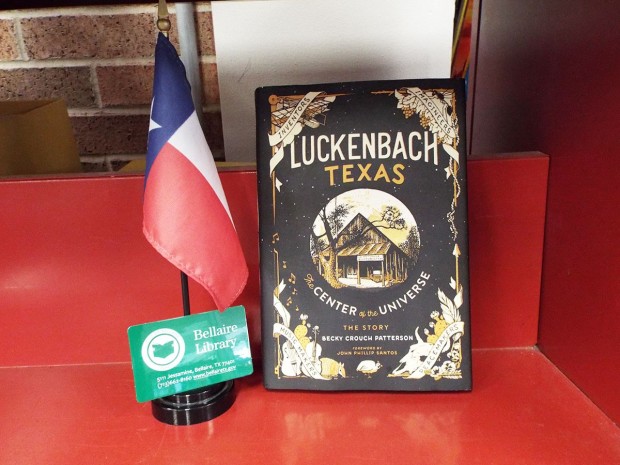 Just saying that phrase to a certain generation of Texans will start them singing a hit song from 1977 by Waylon Jennings. These days I expect the phrase will be uttered by families on their tour of bluebonnet fields this spring, especially after reading Luckenbach, Texas – the Center of the Universe, The Story by Becky Crouch Patterson.

Patterson is the daughter of Hondo Crouch, owner and mayor of Luckenbach, a community near Fredericksburg in the Texas Hill Country, and brings us some of the legendary stories from her father, Hondo, as well as some of the history of German immigrants who settled Fredericksburg and other towns in the area. She is also the author of Hondo My Father, 1979 and The Ranch That Was Us, 2012.

But it is this book, Luckenbach, Texas – the Center of the Universe, The Story where she explores the influence of Hondo Crouch, a Texas rancher and master Texas folklorist, in this small community. From women chili cook-offs and the Luckenbach Great World’s Fair to Willie’s Fourth of July Picnics and the music venue it is today, Patterson shares stories of creation of a legendary town. There are several accompanying pictures to enjoy as well. The writing is smooth and you are transported back in time.

According to the wildflower people, this year is a record year for wildflowers, especially bluebonnets. So as you travel through the winding back roads of the Texas Hill Country searching for pastures of our state flower, stop in Luckenbach. Everybody’s somebody in Luckenbach.
Luckenbach is a state of mind and a great place to visit on an afternoon of bluebonnet viewing. Happy trails.

Read more on bluebonnets this season: Smiling in the bluebonnets, Bluebonnet sightings in Buzz neighborhoods and Bluebonnet Sighting in Houston: Terry Hershey Park.