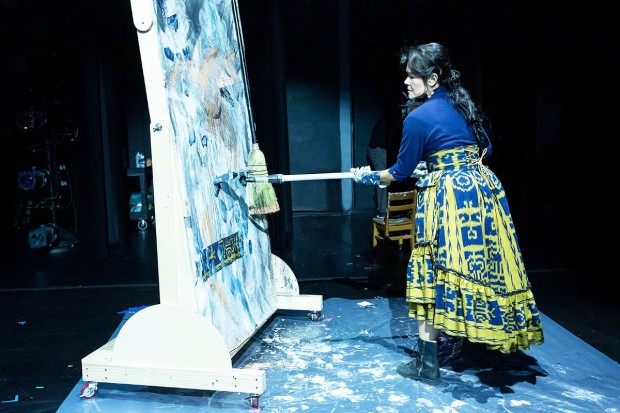 If you had asked a teenaged Geraldina Interiano Wise what her future held, she’d have answered: earning an architecture degree from an American university, returning to her birthplace of El Salvador and dedicating her career to planning and designing affordable housing.

Yet Geraldina is now a longtime West U resident (of 25 years), the wife of Scott W. Wise — an American and a Texan —and an innovative visual artist in addition to being a respected home designer. Most recently, Geraldina collaborated with nonprofit Musiqa to produce a piece of “performance art,” where she created an abstract painting, live, during a sold-out performance at Midtown Arts and Theater Center Houston.

Though Geraldina may not have predicted her path into performance art, in retrospect, her artistic career in the United States, and even her breakthrough into live performance art, has been in the making since birth. 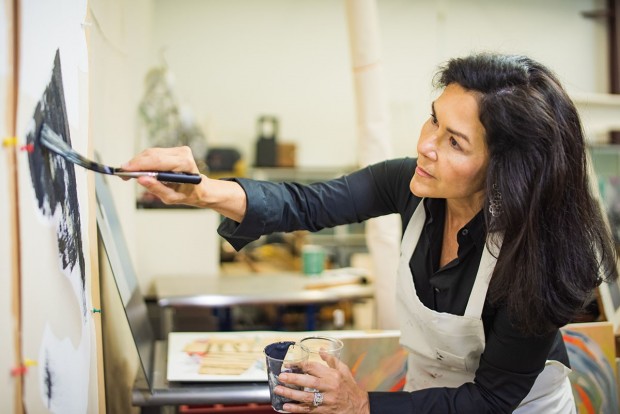 Geraldina was born in El Salvador, but she spent the first five years of her life in the United States. Her dad worked in the foreign service and was stationed in New York, where he served as Consul General. Spending her early years in the U.S. meant that Geraldina naturally became bilingual. Upon returning to El Salvador, Geraldina’s parents sent her to an American school, furthering in English-speaking abilities and paving the way for her to attend Rice University, where she obtained a BA in Art/Architecture/Art History and a BArch.

Geraldina’s parents also helped develop their daughter’s artistic side. They saw her raw artistic talent from a young age and sent her to Saturday morning art classes, taught by Violeta Bonilla, a student of the world-renowned Mexican painter Diego Rivera. Against her protests, Geraldina was woken up at 7 a.m. each Saturday morning throughout adolescence and “deposited” at Violeta’s house.

Geraldina recalls sitting outside of Violeta’s home, situated in the ravines of the San Salvador Volcano, and painting ravines. Perhaps preparing Geraldina to paint in front of an audience, children from the nearby creek would hide and watch Geraldina paint.

“In a way, I have felt that watchful eye for a long time,” Geraldina says.

But it wasn’t until years later, when Geraldina visited NYC’s Museum of Modern Art about four years ago, that she discovered her dream to paint in front of a live audience. Geraldina spotted one of Robert Rauschenberg’s seminal “Timed Paintings” and immediately made a beeline towards it. “It looked like something I would do,” Geraldina says. “That’s a ridiculous statement to make since Rauschenberg is one of the best,” she adds. “But at the heart of it, it called me.”

Standing in front of the painting, Geraldina Googled it right way and found that Rauschenberg had completed it in one hour in front of a live audience. “I thought, ‘now that is genius.’ That is the ultimate form of expression.”

As luck would have it, Geraldina’s old friend, Dr. Anthony Brandt, would soon be seeking an artist to do just that. Anthony is the artistic director of Musiqa, a Houston nonprofit that integrates music with other art forms. The organization recently decided to host a visual-arts themed concert in honor of their late board chair Edward Shoemake who always loved visual art. Anthony thought a performance art piece would be a perfect addition to the concert, but he had no idea where to find a painter for the job.

Coincidentally, Anthony ran into Geraldina at the Rice University Gym last summer, and Geraldina casually shared her dream of painting live to music.

“Here she was wanting to do the very thing that we were looking for,” Anthony says, clearly still awestruck by the coincidence. Anthony recalls wearing a “poker face,” not wanting to promise Geraldina she could perform with Musiqa before checking with the Musiqa board.

Ultimately, Musiqa loved the idea of collaborating with Geraldina, and the two teamed up, selecting a song written by NYC-based composer Annie Gosfield, that the Musiqa quartet would play while Geraldina painted. For months, Geraldina practiced to the music in her studio in the Washington Avenue Arts District, and the quartet came to practice live with her for the last week. The walls of Geraldina’s studio are still covered with the paintings, each slightly different, which she made while practicing.

Part of Geraldina’s goal with the performance was to democratize art. “You don’t have to have studied art history at a top university to want to have art in your life and to have art touch you,” she says. “It was a demystifying of contemporary art.” 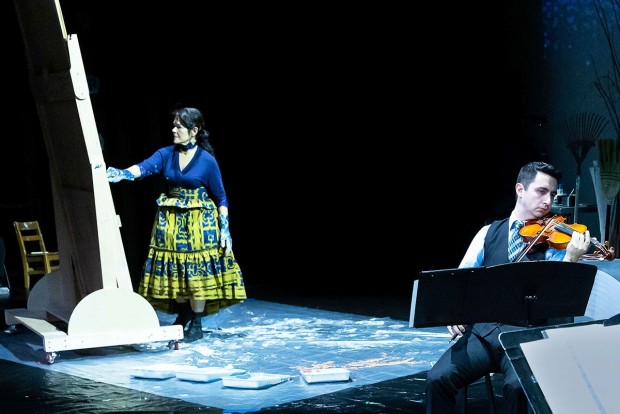 To send this message through her performance, Geraldina used everyday products, like mops, brooms and long-handled commercial paintbrushes, to create her abstract expressionist piece, showing that art can be done with anything. She also made sure to set up the stage such that the audience could see Geraldina, but not the canvas. The reason behind this, she says, is to let the audience see the artists’ process of making art but not the marks on the canvas until the very end.

“You’re listening to the music and watching her, so when you see the painting at the end, it has a lot more impact,” said John Cryer III, a Houston architect and sculptor who co-owns the Washington District arts studio with Geraldina and saw her rehearse and perform. “I think that if you saw the piece being created, you would lose the impact of the music and the impact of her creating it.”

Geraldina plans to repeat her performance on Thursday, April 4 at the opening reception for the Latino Art Now! Conference, which will be held in the Legacy Room at City Hall.

She’s also performing a new piece at The Glade Foundation for the Arts in the Woodlands on April 7, and she’s performing with singer Karol Bennett – Anthony’s wife – at HCC’s Southeast Campus on March 26 at the opening reception for Femme, “A Celebration of Women,” an art exhibit dedicated to celebrating women.

“Art is essential to the human brain and it’s essential for us to be the best humans we can be,” Geraldina said. “It’s that essential, so it needs to be for everybody.” 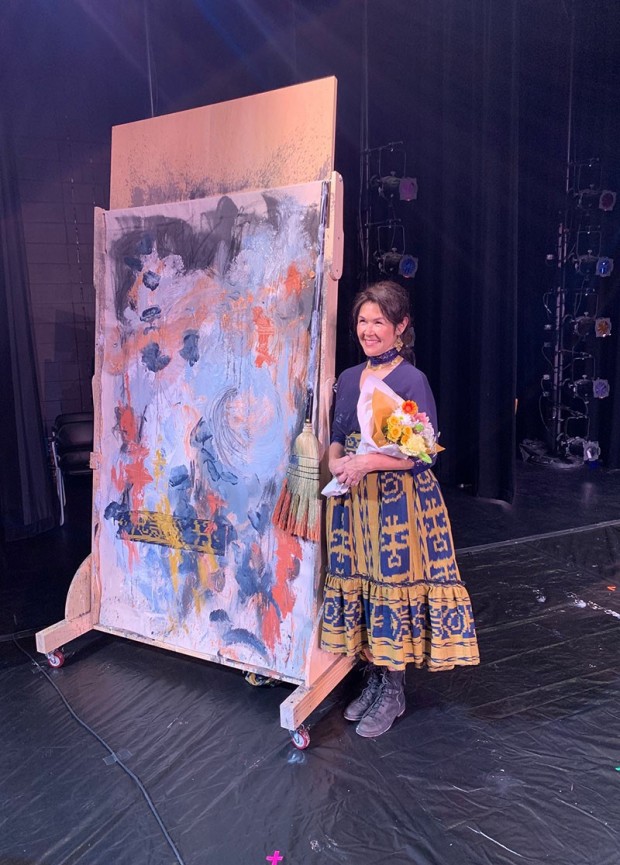 Geraldina Interiano Wise poses with the piece she completed during her live performance in February. (Photo: Lynn Lane)