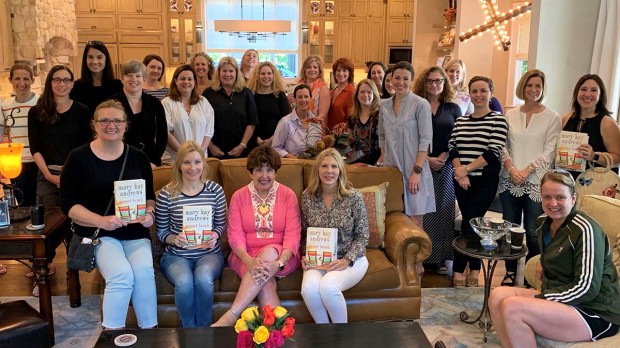 Mary Kay Andrews is surrounded by new fans at a recent Conversations from a Page event.

A couple of West University neighbors have taken summer reading to a whole new level.

Cindy Burnett, a former attorney and current book reviewer, and Krista Hensel, a former physical therapist and current part-time assistant swim coach at St. John’s School, have teamed up to create Conversations from a Page, a several-times-a-year gathering to introduce readers to new authors and books.

The group began when Cindy hosted an event for her friend and local Houston author Katherine Center, when her book How to Walk Away launched in 2018. “Everyone thought it was so great and said they would love to do it again,” Cindy says. “I have a number of friends who are authors, so I reached out to a couple and asked if they’d like to come to Houston to talk about their books, and they said they’d love to.”

That was last October. Cindy invited her friend and fellow St. John’s mom Krista to co-host, and now the events – some morning coffees, some evening gatherings – are held in Krista’s West U home. “We had such a great response to that first event, we decided to label it,” Cindy says. “We used my Instagram, ThoughtsFromAPage, as a jumping-off point and decided on Conversations from a Page.

“We have two goals. First, we want to expose people coming to our events to new authors,” Cindy says. “Through book reviewing, I have found that there are a million and six books being published, especially with self-publishing and Amazon and all these small, independent publishers. So it’s really hard for authors to have good luck with their books selling, even if they’re good books, and for people to weed through all the books out there to decide what to read. The idea is to highlight authors and books we really like and introduce them to a new group of people.

“Second, we keep hearing over and over that people love the social thing where everybody comes together to see people they don’t always see and meet other readers. It’s a community thing. Something fun and social, where people can come and enjoy and feel refreshed.” 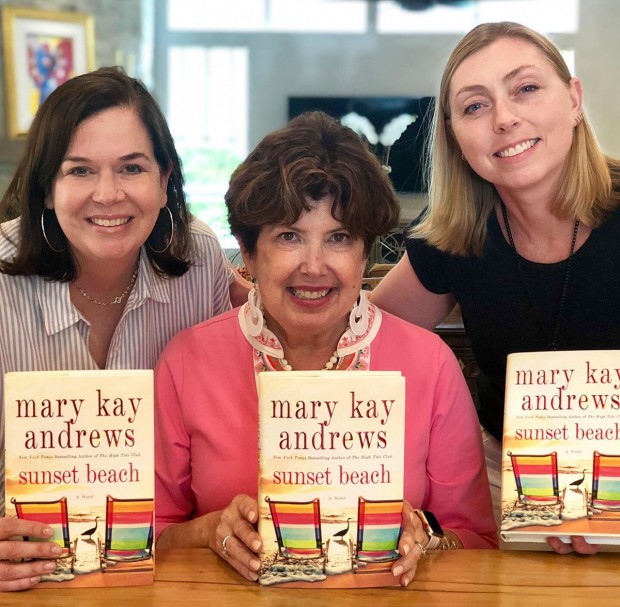 Cindy Burnett (left) and Krista Hensel (right) hosted Mary Kay Andrews at a coffee where the author shared insight about her writing inspiration and process.

Most recently, Cindy and Krista hosted Mary Kay Andrews, a prolific author from Atlanta with a loyal following. “The authors who came in February left Houston and went straight to an event in Atlanta with Mary Kay, and they were raving about our event. Mary Kay was already coming to Houston, and her publicist called us the next day and said they would love for us to host something similar for her. We hadn’t been planning to do anything in May, because it’s a terrible time of year, but we couldn’t pass on Mary Kay Andrews, because so many people know and love her. We’re realizing we need a wide range of authors and genres. And it was totally fun – she’s a hoot!”

As an unwitting prelude to Conversations from a Page, Cindy started her Instagram account, or “Bookstagram,” as avid readers and book reviewers dub accounts like hers, three years ago. “There is a huge book reviewing community on Instagram,” she says. Knowing she wanted to review books online, Cindy chose Instagram as her platform. “When I was trying to decide where I was going to review, I noticed that people were moving away from blogs, going to places like Facebook and Instagram where they already are. I never want to go to all those independent blogs, so I didn’t want other people to have to do that.” 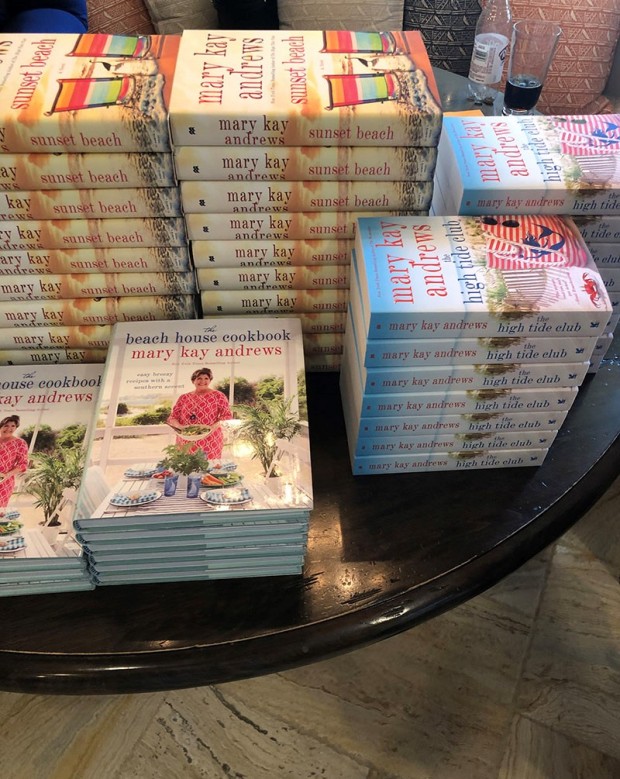 Author Mary Kay Andrews brought several books, including her cookbook, to sell and sign at a Conversations from a Page coffee.

Although it’s turned into something big, Cindy’s passion for books has always been just that – a passion. The former attorney and mother of three says, “I always read a ton, and once my kids were in elementary school and it wasn’t so hard keeping up with a toddler at home, I started feeling like I wanted to do something else. I am in all these book reviewing groups online. I got involved with a friend who runs a Facebook book group, and it started blossoming from there.” The Facebook page she references is Great Thoughts' Great Readers, a group started by a friend in Dallas which has become a “huge community of authors and readers.” The group is committed to keeping things positive: “If you don’t like a book, that’s fine, but it all stays positive there. I was in charge of a reviewing group and met all these people on the Internet.”

Those new friendships made online have developed into something more. Cindy now attends a book conference in New York, where she has met a lot of like-minded readers and authors. “It all kind of came about organically, and it’s come to this,” she says.

Editor’s Note: For more on what to read next, see Summer reading list by Andria Frankfort.