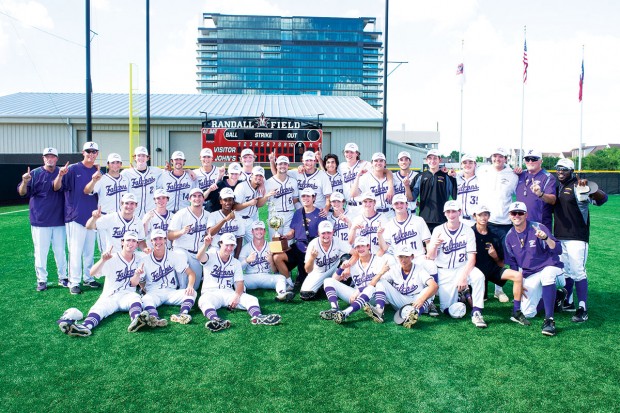 BASEBALL CHAMPS The Kinkaid Falcons captured the SPC baseball championship with a thrilling 1-0 victory in the SPC title game. For the season, the Falcons earned a No. 2 state ranking with an overall 31-2 record. (Photo: David Shutts Photography)

The Kinkaid Falcons capped off a magnificent 31-2 season by beating rival Episcopal 1-0 to capture the SPC Baseball Championship.

“It was an incredible year,” said Falcons head baseball coach Steve Maas. “This was by far the most unselfish team I’ve ever coached. They were truly a special, hard-working group, and I couldn’t be any prouder of this team.”

In the SPC tournament, the Falcons defeated Dallas Greenhill 15-0 behind a complete-game no-hitter from pitcher Michael Duncan. Then, after beating a strong John Cooper team 6-5 in the semifinals, Kinkaid pitchers Cade Moulton, David Shaw and Stone Simmons combined for the thrilling 1-0 shutout victory over Episcopal. “Cade grew up in a huge way for us this year and gave us four strong innings of one-hit baseball,” said Maas. “David followed and did a great job to keep Episcopal scoreless, and then Stone came in with two runners in scoring position to strike out the final two batters and secure the championship.”

Those last two strikeouts, numbers 100 and 101 on the season for Simmons, set a Kinkaid all-time school record for most strikeouts in a single season. “Stone just has that special ability to handle the moment,” said Maas. “He’s come through for us time after time in tough situations during his tremendous career at Kinkaid.” Simmons, who’ll next pitch at Furman University, is one of several Falcons who’ll play major college baseball next season, in addition to Cade Moulton (Air Force), Carlos Abello (Princeton), James House (Dartmouth), Wyatt Young (Oregon State) and Chris Stallings (Air Force). 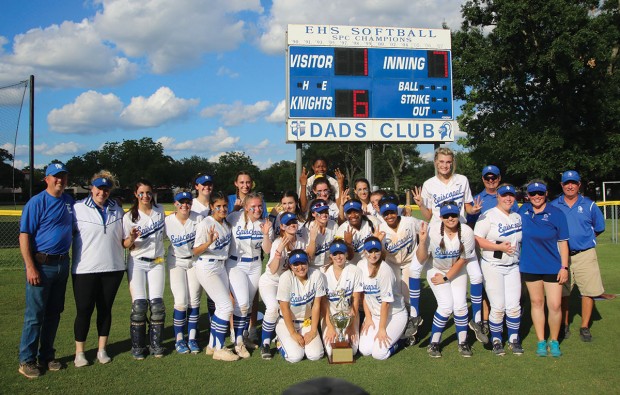 The championship tradition continues for the Episcopal Knights softball team, which secured its third straight SPC title and 10th championship in the last 21 years. “Coach Kim Randolph, who retired from coaching this season, did such a phenomenal job in building a winning tradition here, and this title is a testament to his legacy,” said Knights first-year head coach Caitlyn Cain. Cain actually played for Randolph for four seasons between 2004 and 2007, with the Knights winning championships in all four of those seasons.

As for this season’s title, Cain credited the hard work of every player for the team’s success. “We lost so many amazing seniors from last year’s championship team, but our girls put in the dedication to continue the winning tradition. We lost our first seven games, but I’m so proud of how they were able to turn it around to win 14 of our last 15 games.”

For the season, junior first baseman Lexi Sagers led the team in hitting with a .484 average while accounting for 24 RBIs. Senior third baseman Rachel Boeker, who homered in the SPC final victory over St. John’s, was a major contributor with a .406 batting average, while junior outfielder Ka’lyn Watson tied a school record with 11 homers this season. Watson, who won athlete of the year honors at Episcopal, also hit for a .394 average with 26 RBIs. On the mound, the tandem of Reese Barrett and LeAnn Dromgoole led the way, with both boasting 2.75 ERAs. 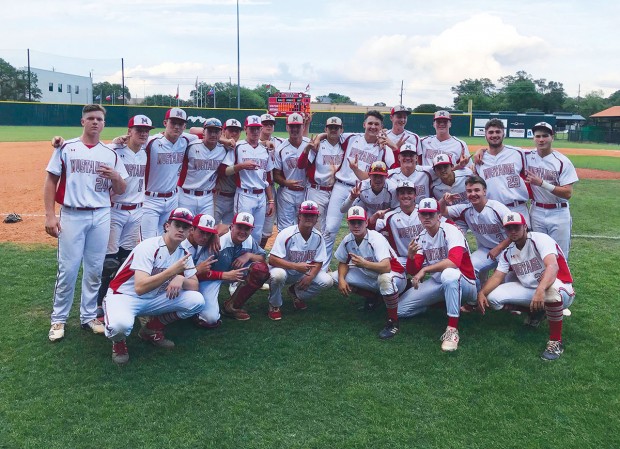 MIGHTY The Memorial Mustangs were one of the region’s winningest 6A baseball teams. The Mustangs are pictured here after winning their 29th game of the season by defeating Bellaire in the bi-district playoffs.

With their two-game sweep of Bellaire in the first round of the UIL 6A baseball playoffs, the Memorial Mustangs raised their record to a lofty 29-4 on the season. Prior to that, the Mustangs had closed out the regular season with a No. 13 state ranking and a District 17-6A championship to its credit.

“These kids have worked really hard since they were 4 or 5 years old to get where they are today,” said Mustangs head baseball coach Jeremy York. “They’ve committed themselves to getting better and better at the game, and they’re also a fun group to be around. The biggest thing is just how they go about their business.”

“We just have that grit and drive to get better every time out,” added Mustangs senior Clark Henry. “We just love working with each other and building a unique team chemistry.”