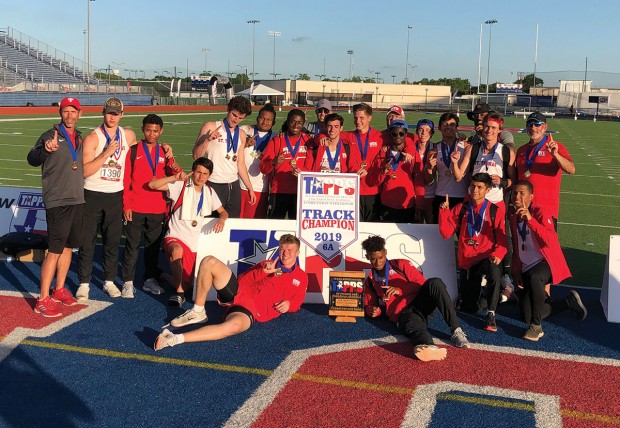 STATE CHAMPIONS The St. Thomas Eagles staged a remarkable comeback to win the TAPPS 6A state track and field championship. St. Thomas rallied from a 60-point deficit to pull out the dramatic victory.

As he soared his way to a jump of 6’6” to win the final event of the meet, Peyton Matocha also secured the TAPPS 6A state track and field championship for the St. Thomas Eagles. “The way it finished was simply awesome,” said Eagles track and field coach Nathan Labus.

The Eagles put forth a spectacular comeback after trailing Dallas Bishop Lynch by a 89- to 29-point margin following all of the meet’s running events. Due to weather conditions, the field events, which typically occur on the first day of the meet, were held after the running events, and that’s when the Eagles staged their dramatic come-from-behind victory.

The comeback trail was spearheaded by first-place victories from Elijah Carter in both the discus and shot put, while Thomas Cooper added valuable points by taking third place in the shot put. In addition, Ian Wheeler and Luke Pane finished in second and third place, respectively, in the pole vault, while Dylan Dixon added to the point total in the triple and long jumps. “It all came down to the high jump, and Peyton had to get first place for us to win state. He set a new TAPPS state record, and our whole team just went crazy,” said Labus. 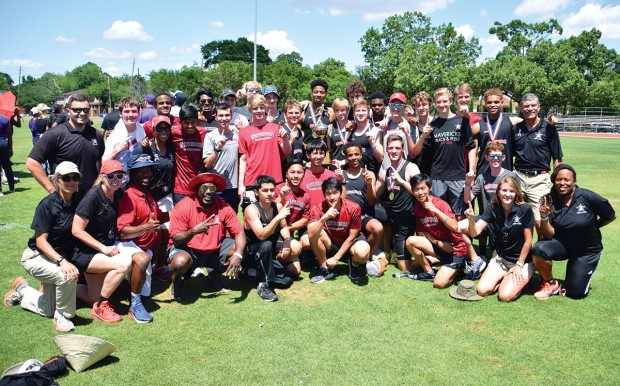 STATE CHAMPIONS With their dramatic mile-relay victory in the final race of the meet, the St. John’s Mavericks secured the SPC boys track and field championship.

There was no shortage of drama at the SPC track and field championships too, with the St. John’s Mavericks winning the final race of the meet to capture the SPC title. The Mavericks trailed Dallas St. Marks by 1.5 points entering the mile relay, but the foursome of Lethan Hampton, Douglas Parsley, Aloye Oshotse and Genson Hooper-Price teamed up for the victory in a suspense-filled final race. Hooper Price, who ran the anchor leg to secure the victory, had earlier also won gold medals in the 100 meter, the 4-by-100 meter relay and even the triple jump.

“It was a gutsy effort for sure by Genson,” said Mavericks track and field coach Richie Mercado. “He tweaked his hamstring earlier in the meet, and we weren’t even sure he’d be able to run in that final race. He told me ‘I want to run it,’ and somehow powered through the race. He showed a lot of heart.”

The Mavericks benefited from outstanding efforts across the board, including gold-medal finishes for Hampton and Parsley, respectively, in the 400- and 800-meter finals. In addition, Will Leger scored valuable points in a trio of field events, while Collin Fullen was second in the 100 meters and third in the 200 meters. “It truly was a great team effort,” said Mercado. 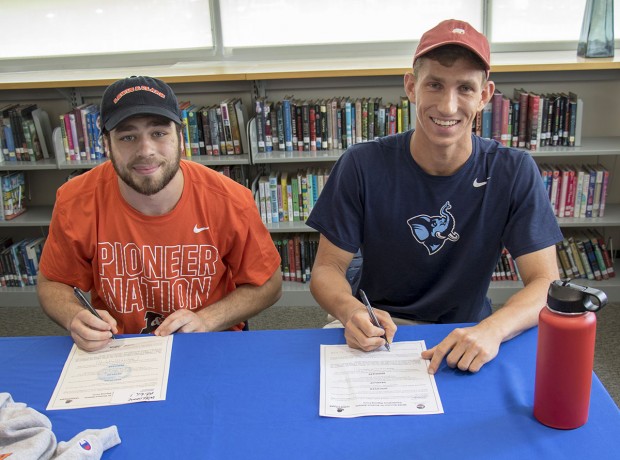 For the third time in school history, The Emery/Weiner School is sending a player to the collegiate football ranks. Jaguars linebacker/running back Mitchell Robbins signed to play Division 3 football for Lewis & Clark. Making the signing most notable is that Robbins is a product of a six-man football program at Emery/Weiner. “Despite the difference in the six-man game, the feedback we received about Mitchell is that the six-man game made it easier to evaluate his open field capabilities,” said Jaguars football coach Jason Reimers. “We hope it encourages other players in our program who have college football as a goal.” 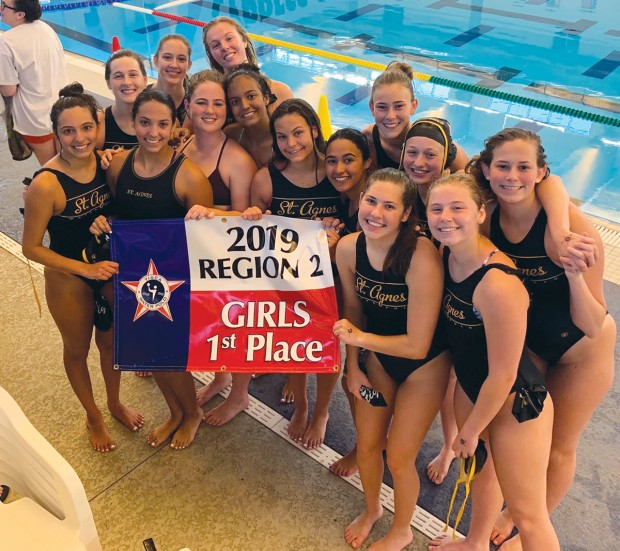 BIG SPLASH It was a season of great goals for the St. Agnes Academy water polo team, which won district and regional championships while also finishing fifth at the TISCA state water polo championships.

After beating the Houston area’s best teams to win district and regional championships, the St. Agnes Academy Tigers advanced to the TISCA state water polo championship. St. Agnes then capped off a tremendous season by finishing fifth in the state. “We’re the only girls’ private school in the state that competes in the same division as all the large public-school programs, so that just illustrates the strength and talent of our program. We also brought home our first regional title in over 10 years,” said Tigers water polo coach Kaitlin Kelley.

The Tigers finished the season with a lofty 39-6 record, with three players earning all-state honors, junior goalie Abigail Shelby, senior Emily Traynor and sophomore Adrienne Grimes. In addition, Grimes and Traynor were named fourth and seventh team All-Americans, respectively. “There were only seven All-American spots allotted for the entire southwestern United States, and for St. Agnes to earn two of those seven positions truly says a lot about our team,” said Kelley. “These girls really are incredible athletes.”

On the topic of St. Agnes, next month’s SportsBuzz column will include a write-up on the Tigers’ newly crowned state-championship softball team.