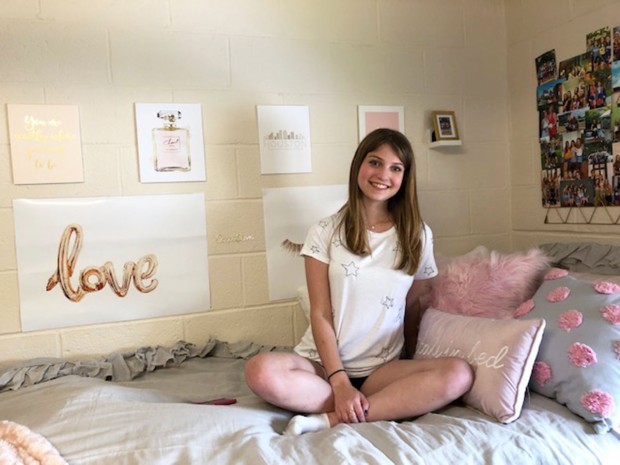 Sofia Siegel used wire grids to hang lots of photos from home on her walls at Brandeis.

Social media over these past couple of weeks has been nothing but firsts and lasts – first day of Pre-K pictures giving way to parents hugging their children and leaving them in faraway cities as college students, musing about how fast it all goes. And for the college parent posts, especially those from the freshman parents, there’s always a picture – or a few – of the perfectly arranged dorm room.

Scrolling through, I’ve seen girls’ rooms that I’d happily move into tomorrow (almost), and I’ve seen boys’ rooms so sparse you wonder What exactly did they take with them? I’ve talked to parents whose cars have been stuffed like a Beverly Hillbillies truck, and I talked to a dad – this is real – whose son brought literally one suitcase with him to Connecticut. It’s cold in Connecticut. He did have a box of bedding shipped as well. But, again, one box. 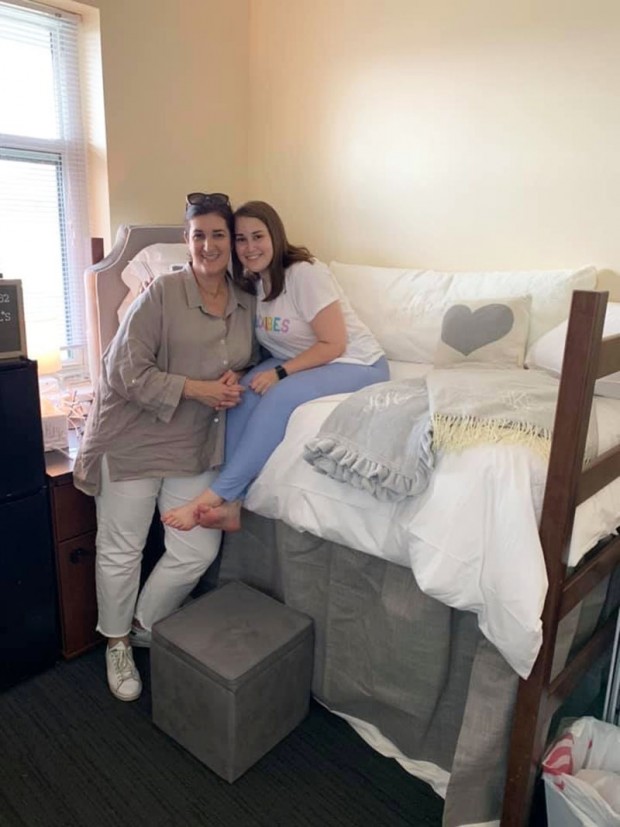 Now that I’m an old pro (meaning I’ve done this once), friends have asked all kinds of questions over the summer: Do you really need all those things on the Bed, Bath & Beyond list? How big a rug do I buy? Should I monogram pillows in a boy’s room? These conversations would go on for indecisive weeks. Until, finally, everyone made their decisions and figured things out and just moved in.

How did it all work out? Let’s take a look at where some of our newest college freshman neighbors will be living this year. And for you up-and-coming college parents, don’t get too caught up in dorm décor next year. Because at the end of the year, it ends up like this.

Sam Elmer, a graduate of Episcopal High School, is living in Lechner Hall at A&M in College Station. “We are cracking up that the one pennant and some A&M Yetis are the only decorations,” his mom Linda says. “So different than the girl rooms of friends’ kids. I was so happy I talked him into getting a little rug for next to his bed and a bulletin board, although it has nothing on it! I just mailed him some photos. Hoping they end up on it.” 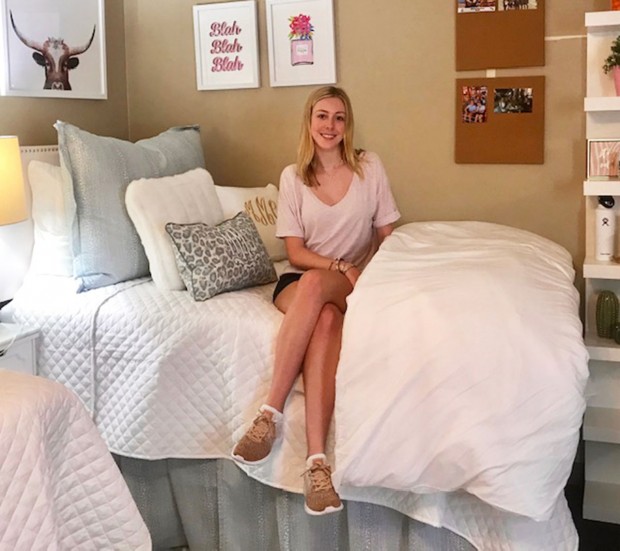 Molly McGreevy in her room at The University of Texas at Austin.

Molly McGreevy graduated from Episcopal High School and is off to The University of Texas at Austin. She’s living in Hardin House, where the room had little natural light. Her mom Jackie added battery-operated puck lights into built-in shelves over Molly’s desk, and they used stick-on vanity lights they found on Amazon to illuminate mirrors that were already in the room.

Anna Rosenfeld, a graduate of St. Agnes Academy, is living in McFadden Hall at A&M. About drop-off, her mom Jennifer says, “Wow it’s hard! I still have the twins at home, but my big girl is off. I think she’s adjusting way better than me!” 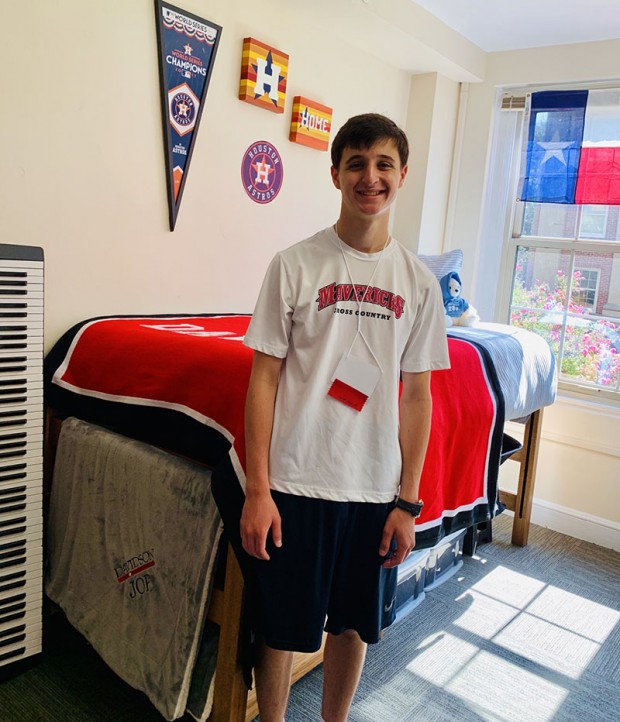 Jonah Pesikoff shows his Davidson spirit with a big red blanket at the foot of his bed.

St. John’s School graduate Jonah Pesikoff is off to Davidson College in North Carolina. He shows his Davidson spirit with a big red blanket at the foot of his bed.

Kendall Kalmans graduated from The Kinkaid School and is attending Emory University in Atlanta. Kendall’s mom Elyse ordered Kendall’s duvet cover from Restoration Hardware Baby & Child. The headboard and “curtains” under the bed came from Room422.com.

Sofia Siegel graduated from Episcopal High School and has moved to Brandeis University in Boston. Sofia used wire grids to hang lots of photos from home on her walls. 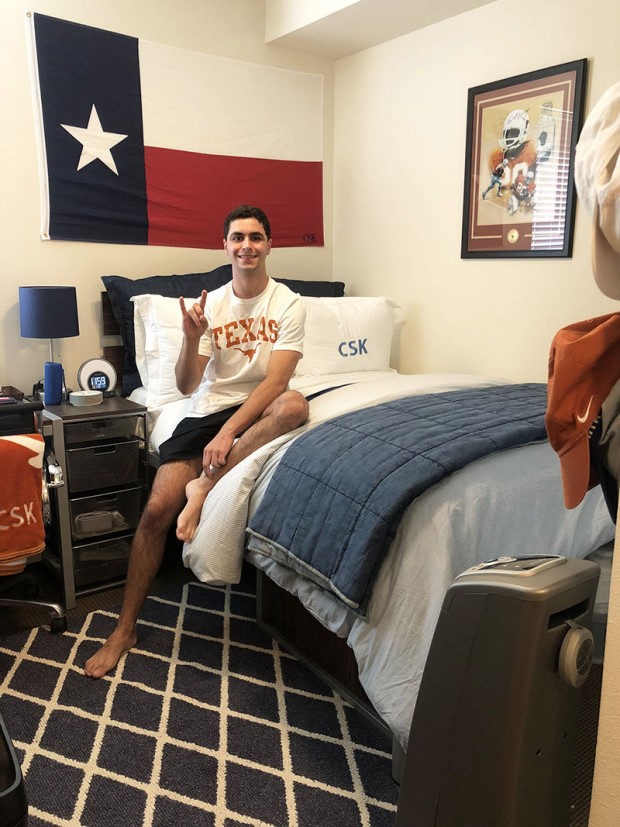 Carter Kardesch is an Episcopal High School graduate at The University of Texas at Austin. His room at The Callaway House is all Texas.

Editor’s Note: Find out where more recent grads are heading to school – and what they could tell their kindergarten selves, if they could – here. Additionally, read about some of the teachers who inspired these graduates along the way. Also, check out – and contribute to, if you haven’t yet – our annual database of college-bound seniors here. 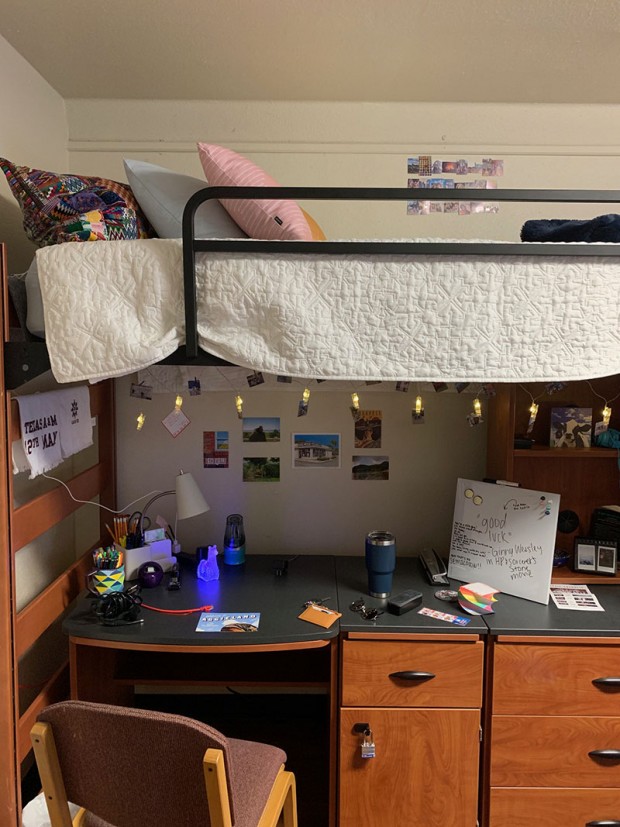 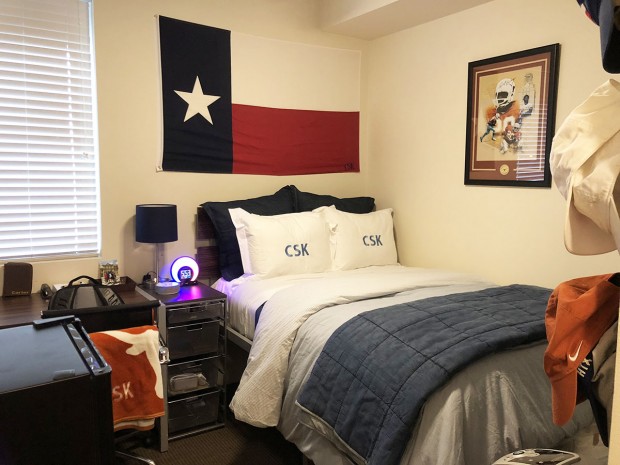 Carter Kardesch's room at The University of Texas at Austin. 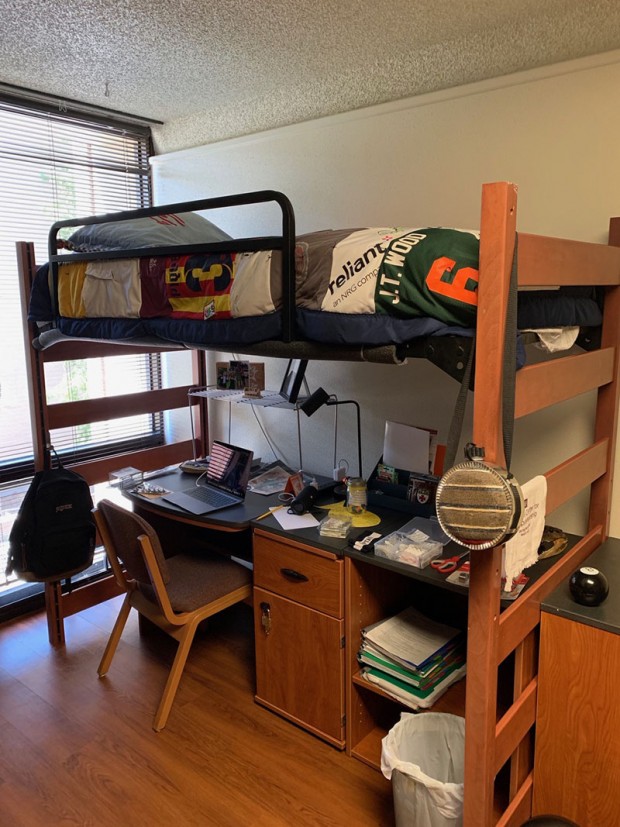 John Thomas Wood lofted his bed over his desk in his room at Texas A&M. 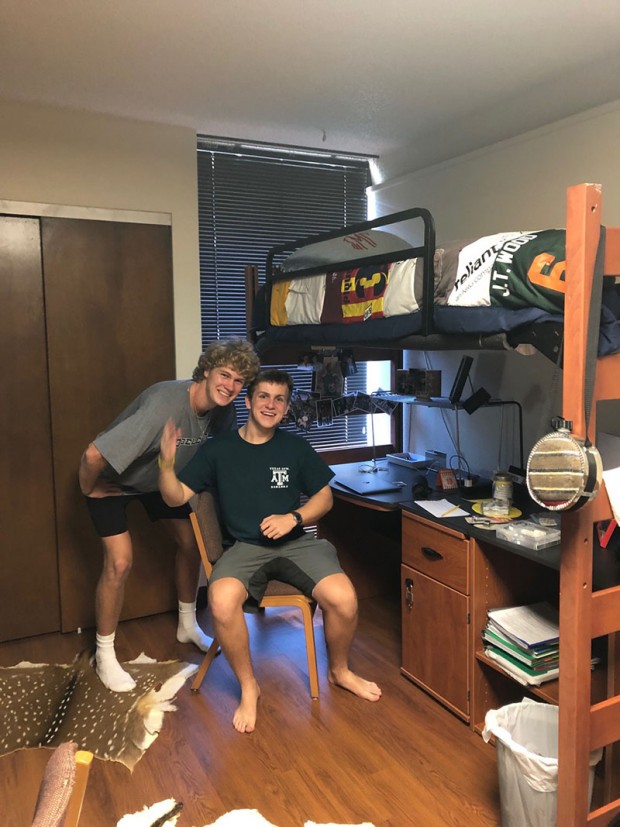 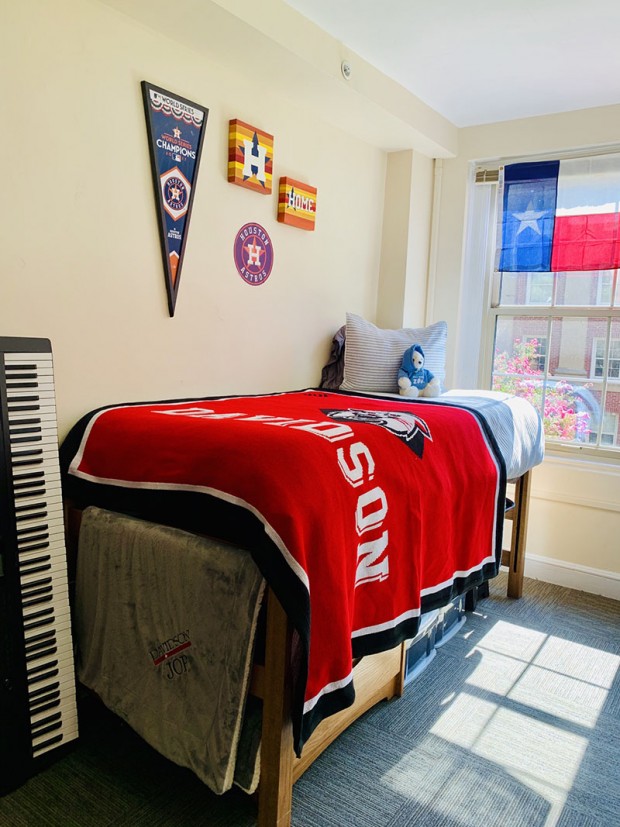 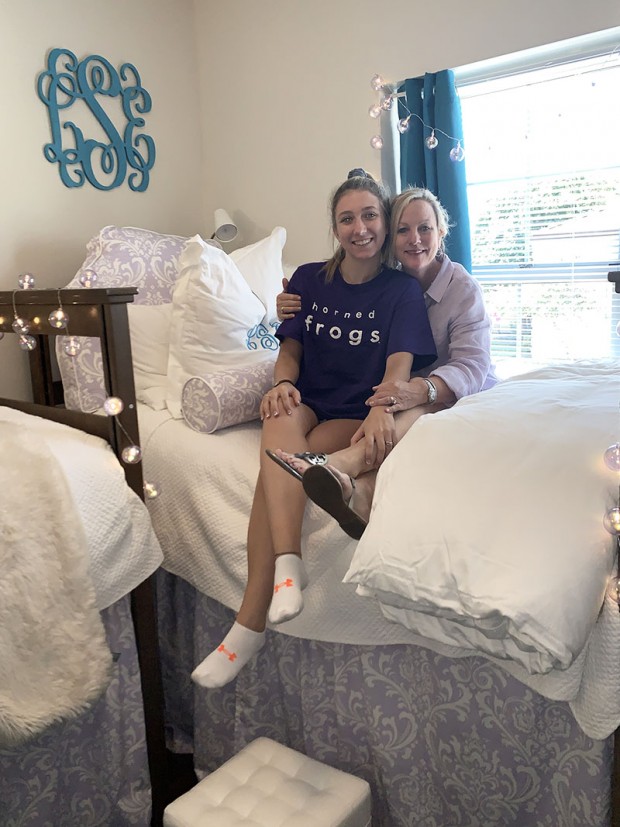 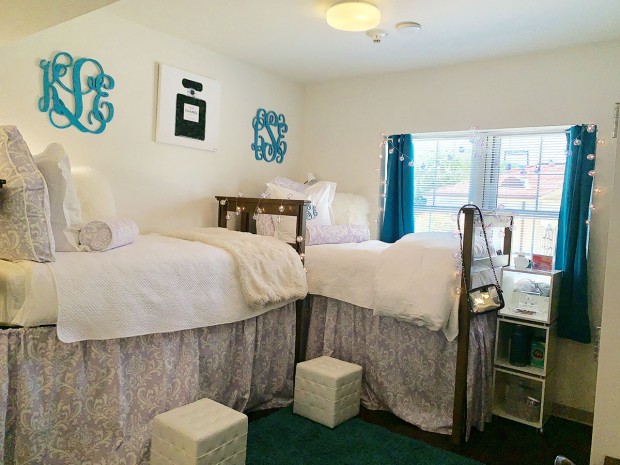 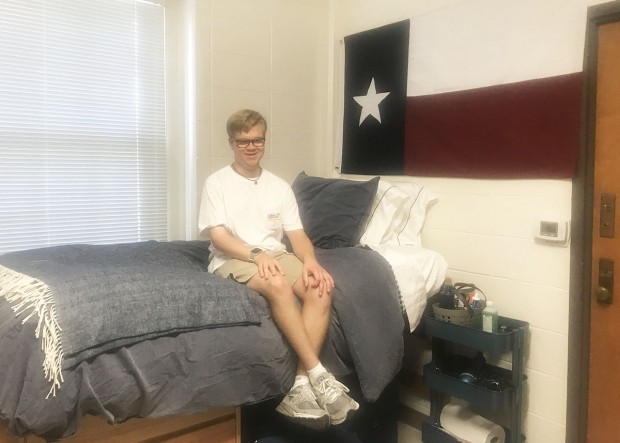 Michael Halverson shows off some Texas spirit in his room at Samford University in Birmingham. 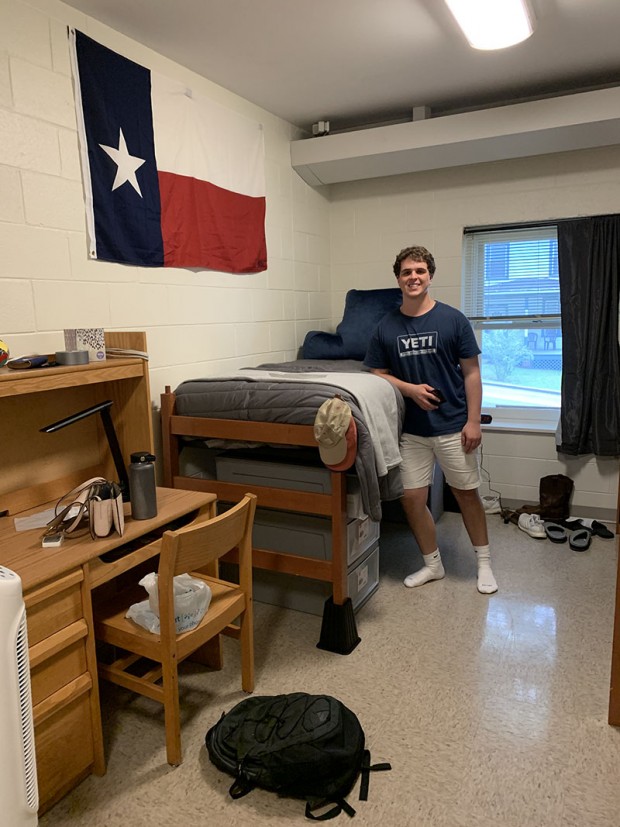 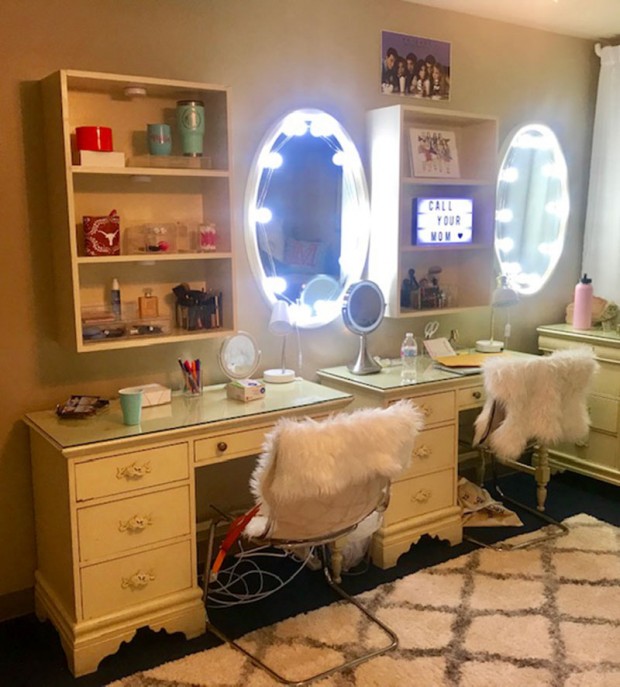 Molly McGreevy and mom Jackie used stick-on vanity lights they found on Amazon to illuminate mirrors that were already in the room. 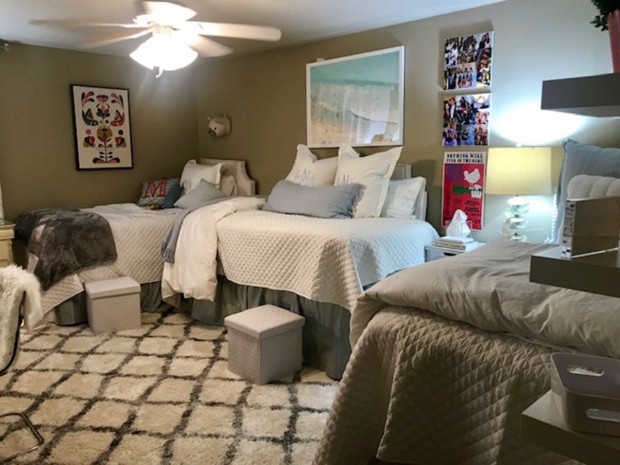 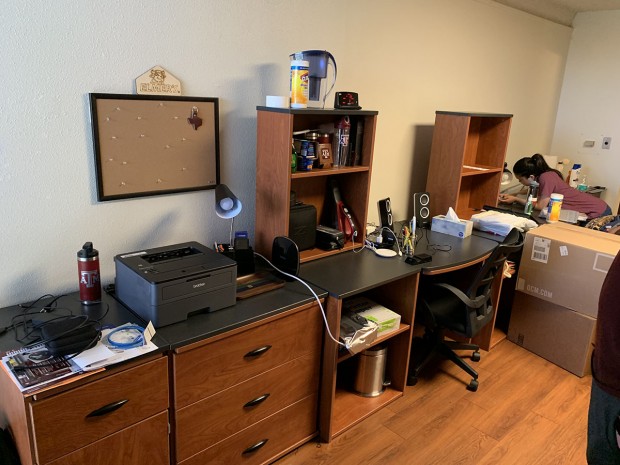 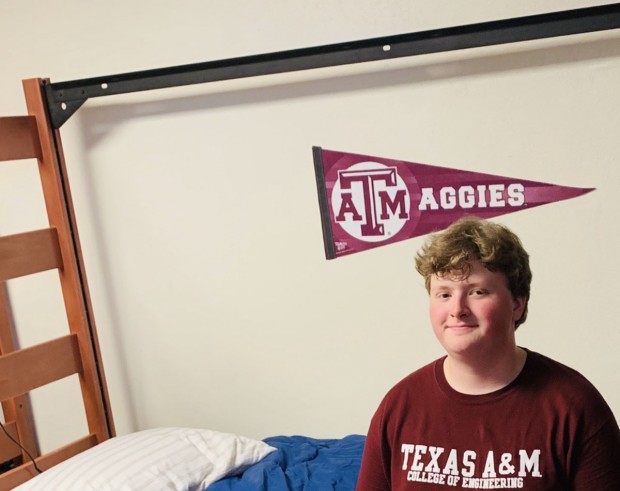 Sam Elmer shows off his Texas spirit at A&M . 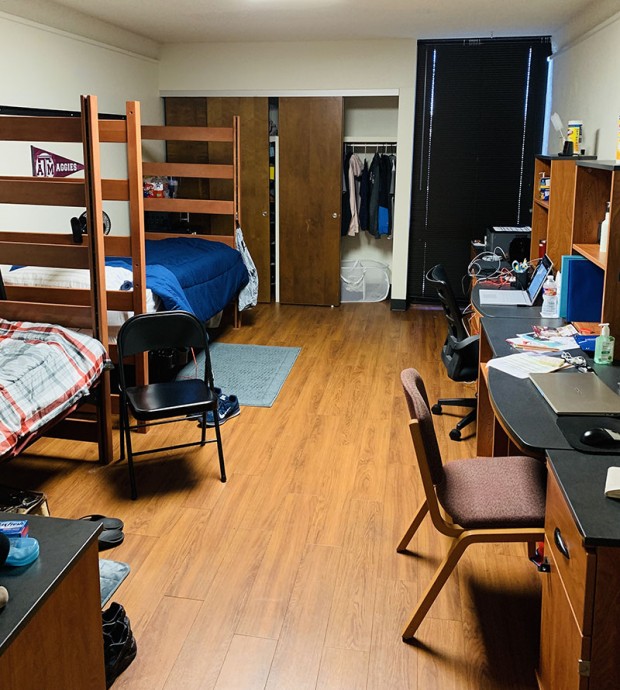