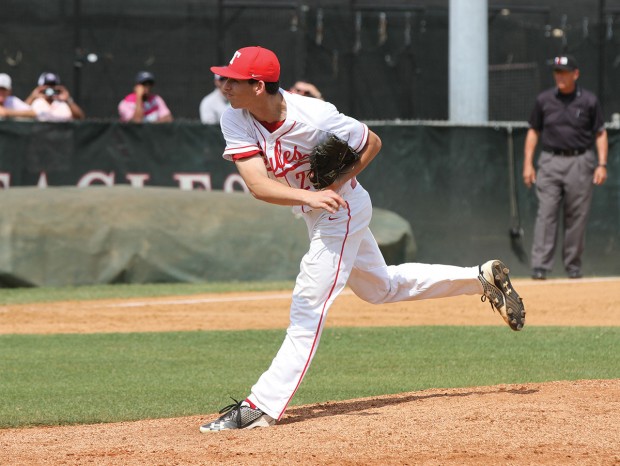 DREAM COME TRUE With his selection by the New York Mets in the second round of the MLB draft, St. Thomas pitcher Josh Wolf became the highest draft pick in the history of the Eagles baseball program.

In the wake of a sensational senior season, St. Thomas Eagles pitcher Josh Wolf was selected in the second round of the MLB draft by the New York Mets. “It’s been my dream pretty much my whole life to play Major League baseball, and to now have the opportunity to fulfill that dream is a really great feeling,” said Wolf. “Not only that, I get the chance to play ball in one of the greatest cities in the world. It’s really pretty cool.”

As a junior last year, Wolf earned all-state honors and last November had signed to play college baseball at Texas A&M. But Wolf took his game to an even higher level this season, striking out 126 batters in 69 innings. He capped off his illustrious career at St. Thomas with a two-hit shutout victory over Concordia Lutheran in the TAPPS 6A state semifinals.

Now, as the 53rd overall pick in the MLB draft, Wolf also becomes the highest draft pick in the rich history of St. Thomas baseball. “It’s really amazing,” said Wolf. “St. Thomas has such a tremendous historic program, and the fact that I’m the highest-drafted player ever from the school is truly an honor.” 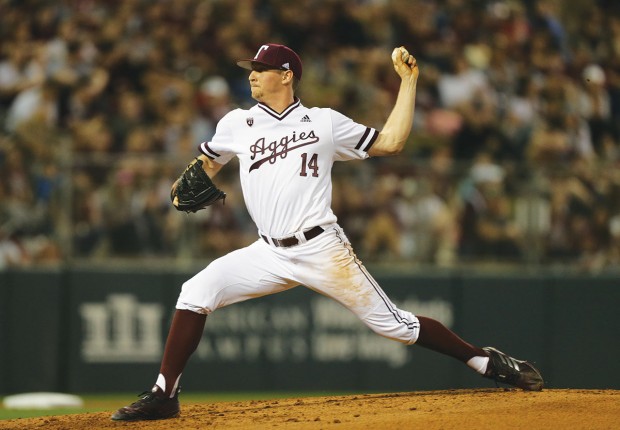 A TRADITION CONTINUES Former Lamar Texan and Texas A&M star pitcher John Doxakis was selected in the second round of the MLB draft by the Tampa Bay Rays. The pick adds to the rich tradition of former Lamar players continuing their baseball careers at the professional level. (Photo: Texas A&M Athletics)

The tradition-rich Lamar Texans baseball program added another feather to its cap with the selection of former Texans pitcher John Doxakis in the second round of the MLB draft by the Tampa Bay Rays. Doxakis, a 2016 Lamar graduate who then went on to an outstanding collegiate career for Texas A&M, was the 61st overall player selected in the draft.

Doxakis joins the former big-league team of pitcher Jeff Neiman, who graduated from Lamar back in 2001. “I’ve had the pleasure of coaching four No. 1 draft picks who played their high school baseball here at Lamar, all of whom then became All-Americans at Rice University,” said Lamar baseball coach David Munoz. Along with Niemann (Class of 2001), Kenny Baugh (1998), Joe Savory (2004), and Anthony Rendon (2008) are all Lamar products. Rendon is still enjoying a standout Major League career for the Washington Nationals.

In all, Munoz says about 18 Lamar players over his 22 years at Lamar have gone on to play professional baseball at either the minor or major league level. “We’ve had wonderful support from the administration and parents, plus some really good coaches that have helped lead to the success of our baseball program.”

As for Doxakis, he now becomes the highest draft pick out of Lamar since Rendon was selected back in 2011. “I’m really happy for John,” said Munoz. “He’s an extremely hard worker with a world of upside.” 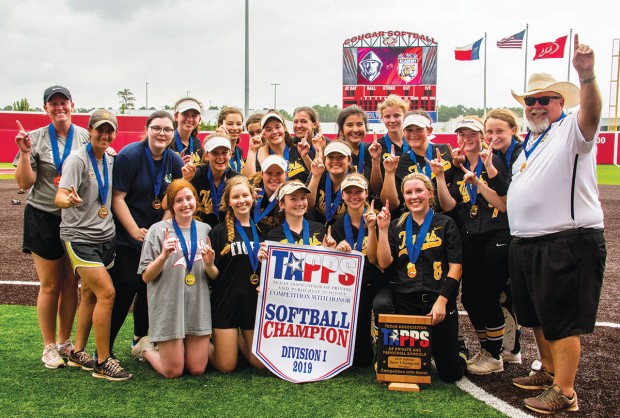 STATE CHAMPIONS The St. Agnes Academy Tigers captured the TAPPS 6A state softball championship for the first time in the last 10 seasons.

This past school year closed out in grand fashion for the St. Agnes Academy softball team, which captured the TAPPS 6A state softball championship. “This is really special,” said Tigers softball coach Jamie Wissinger. “My sister Laura was on the St. Agnes team that last won state 10 years ago, and my assistant coach Brittanie Polasek played on that same team. I was actually at that game back then as well to watch my sister win state.”

In her four seasons as the Tigers’ coach, Wissinger has guided the Tigers to the state Final Four in all four years, culminating with this year’s title. At this season’s state tournament, the Tigers were led by a pair of dominating outings on the mound by senior pitcher Shelby Echols, who posted victories over Incarnate Word and then Dallas Bishop Lynch in the state final. “Shelby has been on the All-State tournament team for all four years she’s been with us. She’s been a huge leader and will play college softball next season at HBU,” said Wissinger.

Wissinger credited freshman Sadie Niermeyer with hitting “lights out” in both the state semifinal and championship-game victories. Defensively, sophomore catcher Callie Young and senior shortstop Annie Budnik were huge contributors for the Tigers. Budnik capped off a tremendous season by earning first team All-State honors, while Young was a second team All-State selection.

“Our senior class really provided the leadership and chemistry, which had a trickle-down effect across our roster,” said Wissinger.  “We played as a team all season, and it really showed up at state. You don’t win a championship in a day – you win it in what you do every day.”