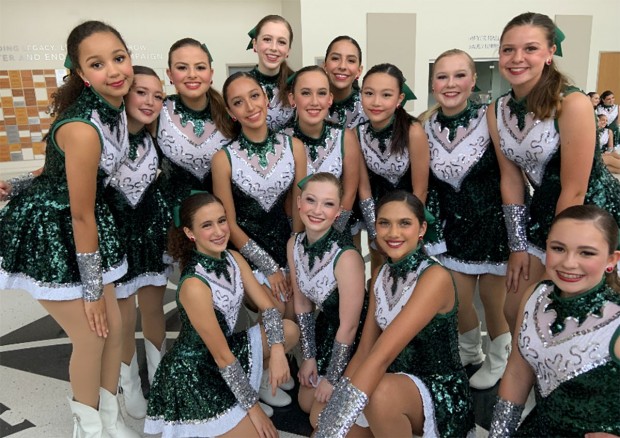 Sparkly shiny dresses shimmer as the Tiger Girls walked onto the football field at the first football game. The dancers had been preparing for this performance for weeks now, getting to school at 6:15 a.m., learning the choreo, and editing their movements to be as precise as possible.

At St. Agnes, a new group of freshmen, sophomores, and juniors have joined Tiger Girls. This year, they are one of the biggest groups to join. The girls that made it past the audition were extremely happy and excited to start the new year with the team, however, most felt nervous because they barely knew anyone. As they started to bond with others, they realized how kind and supportive the team was. Maryrose Rawson (’23) said, “I noticed how everyone was super nice and welcoming and I really felt like a part of a really close community.”

Tiger Girls is an amazing community where everyone includes and supports each other. Cynthia Sanchez (’23) said, “During team, I make so many friends - they became my second family.” It has only been a couple of weeks, but everyone feels connected to one another. There are so many chances to grow as a family such as socials, pot lucks, football games, pep rallies, morning practices, and even traveling to compete at competitions.

Every Tiger Girl joined for their own personal reasons, whether it be for fun or for credits, but most have gotten so much more than that. Emily Parmenter (’23) said, “one of the main reasons I joined Tiger Girls was obviously because I love to dance, but also because I wanted to be on a team that was super close and supportive…Tiger Girl is what I hoped it would be and so much more!”

During the summer, the officers try to put together social events so everyone is more comfortable when the school year starts. I missed the first social, which was a group lunch so the first social I went to was a big pool party. I was scared that I would be the only one that didn’t know anybody, but I soon found out that many others felt the same as I did, so I wasn’t alone. At the party we played games, took pictures and there was even a snow cone truck!

What made it even better was that the older dancers were very including so I didn’t feel left out. I asked all the questions that had been bugging me throughout the summer and everyone answered and told me not to worry about it. When the summer camp came, I was way more comfortable than I would’ve been without going to the social. I’m tremendously glad that I joined Tiger Girls because if I didn’t, I wouldn’t be as happy as I am right now!