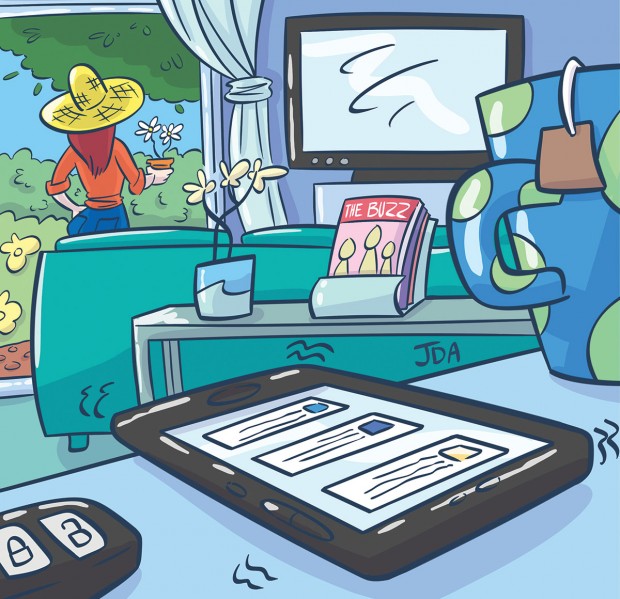 UNPLUGGED There are consequences from taking a break from social media, and pretty much all of them are good. (Illustration: behance.net/runamokstudios)

Last month, I shared a story online at thebuzzmagazines.com challenging readers to unplug from social media for a few days. Nothing drastic – just a few days’ break as a way for people to take full advantage of the waning days of summer by being fully present in their own lives, rather than checking out what everyone else was doing.

USC sophomore and The Buzz Magazines summer intern Elizabeth Barineau was game. Generally, she’ll scroll through social media when she’s bored, or when she’s looking to learn more about a celebrity. Elizabeth deleted the Instagram app from her phone for a weekend, and only allowed herself to continue Snapchat streaks, without engaging in conversations. (Fyi, a Snapchat “streak” happens when you send daily photos and correspondence to a friend, back and forth, every day with no break. Snapchat keeps track of how many consecutive days you’ve connected with that friend, rewarding streaks with special emojis.)

Teenagers take note: “It wasn’t as hard as I thought it would be,” Elizabeth says. “I’d find myself reaching to go on Instagram and realizing it wasn’t on my phone, so I’d do something else to distract myself. I didn’t even put the app back on my phone until the afternoon” after the challenge was over.

But it’s not just teenagers needing a break. Ali Katz makes it her business – literally – to coach people on how to be more mindful and present in their lives. “Instagram is how I connect with people,” she says. “I would go on under the guise of work, but all of a sudden, I’d be on for an hour. Well, that’s not work anymore.

“My rock bottom was when I was in the airport with a book I couldn’t wait to read sitting on my lap. Instead of reading it, I was watching a blogger on Instagram try on clothes at Old Navy. My job and passion are teaching people how to live a mindful, present life. Social media was taking away from me doing that myself.”

That was when Ali decided to take the summer off. “It was eye-opening to see that so much of what I was doing was about sharing on social media, versus just doing it for myself,” Ali says. “I had to do some soul searching about why sharing was so important to me. I realized I want to share and inspire, and I want to get back to that, but I don’t want to go back to the mindless scrolling.

“You can get really sucked into ‘stuff’ and what other people are doing or have. It’s not comfortable to talk about, but there’s a lot of judgement and comparisons. In just a couple of days, I was so much more relaxed and satisfied with my own life, not having all that stuff in my face all the time.”

Lindsay Parmer, a yoga teacher and mom of two young boys, says she regularly does a social media “mini-detox.” Every Sunday, she goes to church and leaves her phone at home. And she won’t touch it all day. “It’s a way for me to re-center,” she says. Also, she doesn’t keep the Facebook app on her phone. “That way, it takes a lot more effort for me to get on and post when I need to add something to the moms’ groups or my kids’ school groups,” she says.

This summer, Lindsay took a full couple weeks’ break from Instagram. “You think you’re missing something, but I wasn’t missing anything. Most of the time I’m scrolling so fast that it’s just a blur anyway.”

Lindsay says her break put social media into perspective for her. “Now I’ve connected Instagram to Chatbooks, so I post pictures of my kiddos, and every so many pictures, Chatbooks sends me this cute, printed book with our family photos. I’m making something instead of just posting.

“Social media is like coffee in the morning,” she says. “You get a hit off of it. Originally you get on for connection and community, but at the same time, there’s this voyeuristic aspect to it. It’s very complicated.”

Everyone – Elizabeth, Ali and Lindsay – reported the physical urge to click into social media when they first stopped. “I’d go to pick up my phone,” Lindsay says. “I had to retrain my brain.”

This fall, Ali has vowed to “determine the appropriate time I want to be on. In between, I’ll delete the apps, so I can only use it when I’m signed in mindfully instead of scrolling in the grocery line. That’s the boundary I’ll set for myself, because I like the way I feel now and want to keep that. I’m being really honest here – I have to set myself up for success.”