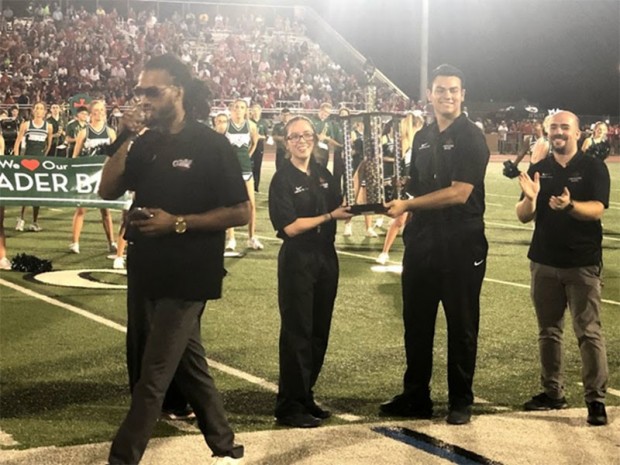 On Friday, Aug. 30, the rival high schools Strake and St. Thomas had a highly anticipated football game. Strake took the victory home with a score of 28-17. But while the Strake football stars showed off their fame on the field, a big part of the team’s fan base was sitting in the stands, about to be honored.

The Strake Jesuit and St. Agnes Academy band travels with the Strake football team to every game, always inspiring the players with energetic songs. But the band does much more than just sit and play for the team every Friday during the football season, the band is at work all year round. Starting late July, the band works for an entire week to not only refresh on how to liven up football games, but to train a whole new year of students how to spread joy with music. This week doesn’t just entail practicing over 20 songs: band members are trained how to march for the half-time show, learn dance moves that unite the band during drum cadences, and each band member comes to understand that the SJ and SAA band is a family.

An entire week of full days of practice may seem like a lot, but the SJ and SAA band doesn’t stop there; every school day, students from both schools meet at 7 a.m. until 7:45 at the Strake Jesuit Parsley Center and diligently work on mastering new songs and challenges. It is amazing that with only 45 minutes every day, the band is able to accomplish everything it does. For not only has the SJ and SAA band encouraged the Strake football team, it has done so much more. 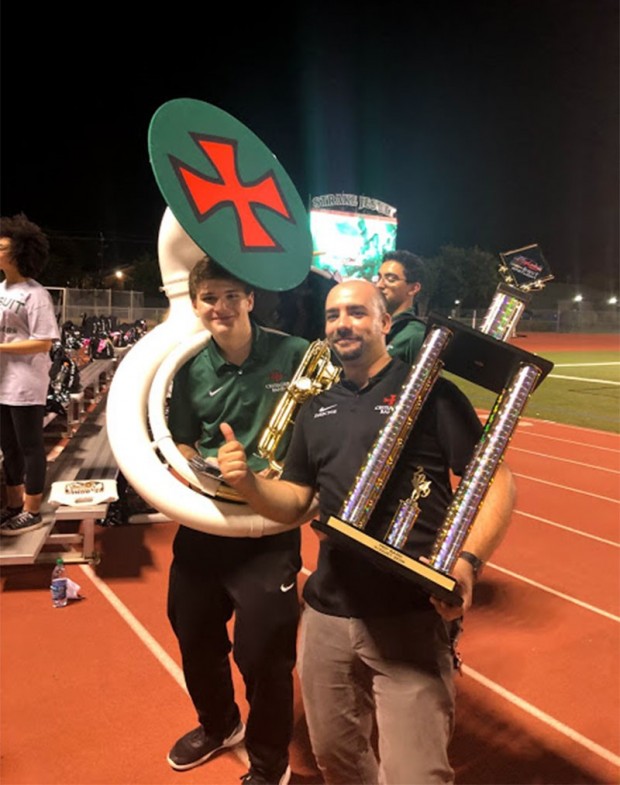 The SJ and SAA band program has also inspired patriotism in our community in multiple ways. Last Spring Break, the band traveled to Nashville and recorded Christmas music for the Wounded Warrior Project. Cds of these recordings were given to donors to the Project. On top of this, last year’s SJ and SAA spring concert was given a patriotic theme and was advertised to veterans around the Houston area. During the concert, after playing many difficult American classics, the band stood up and saluted to an audience filled with veterans. 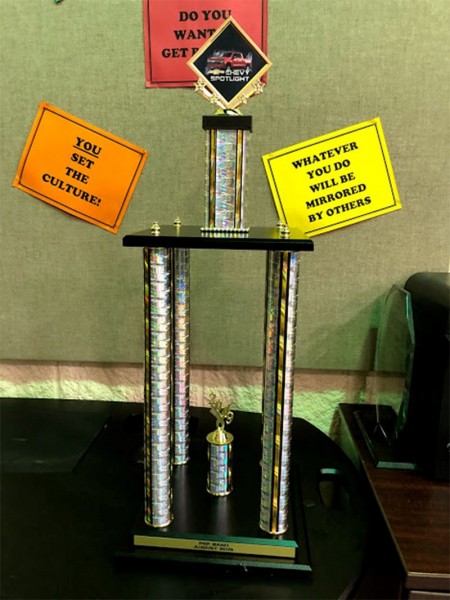 A photo of the Inside High School Sports Spotlight Award received by the SJ and SAA band.

In addition to going out of school and performing, the SJ and SAA band actively participates in many school events for both schools, encouraging school spirit. During this article, you may have noticed that I have referred to the band as being both Strake Jesuit and St. Agnes Academy’s band, even though it is for the Strake football team. The SJ and SAA band does a wonderful job accepting students from both schools, regardless of musical knowledge, into the band family. The SJ and SAA band shows dignity, responsibility, service, and hard work in everything it does.

For all of these reasons, KHOU and Chevrolet discovered how great of a job the SJ and SAA band is doing and decided to present them with the Inside High School Sports Spotlight Award! This prize becomes even more of an honor when coupled with the fact that this award typically goes to football teams, cheerleaders, and the like, not to bands. This prize was given to the band’s drum majors, Maya Jaaskelainen and Zach Mascorro, during the Strake vs. St. Thomas football game’s half-time show on Aug. 30. The prize was presented during the football game by Chevrolet for maximum publicity, as the football game was attended by an estimated 5,000 fans. But to make sure the band’s glory was seen by as many as possible, KHOU televised the band’s award ceremony! It truly was a great game for the SJ and SAA band!