The Porch is Open 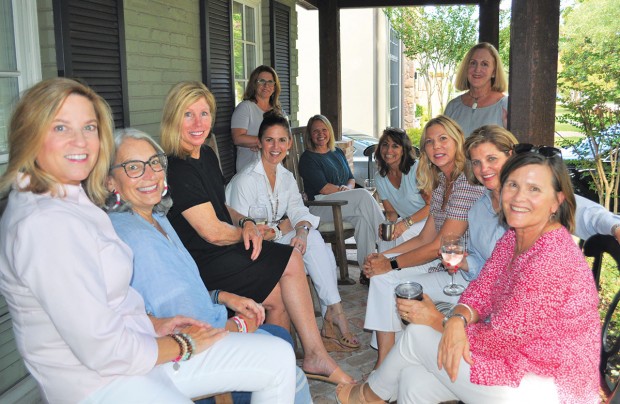 It’s often said that the only constant in life is change. Sometimes though, friendships we develop manage to make it through life’s changes without any signs of aging.

Such is the case for Christy Heno and her band of friends who meet every week for “Porch.”

About five years ago, Christy was sitting on her porch with longtime friend Molly Fraser. The two met when their then-high school daughters played softball together many years before. They discussed how, over time, they had become disconnected from other adult friends.

Whether through sports teams, schools, church or the neighborhood, the core of all their relationships had been the link to their children. With their kids now driving and independent, there wasn't the same weekly parent exchange at softball games, school events and carpool.

“I felt like I went to work and I came home and saw my family, but that was it,'' said Christy, head of the lower school at Presbyterian School.

The two hatched a plan to reconnect with old friends, and Christy’s cozy porch in the middle of West U seemed like the perfect spot.

Their initially small group has grown in size over the years, consisting of Christy’s friends from all different facets of life. “I’ve known Christy and Molly for 15 years, but this has been a great way to get to know them on a different level – apart from the kids,” says Lynne Goddard. “I’ve gotten to know people I wasn’t as close to and met new people, which you don’t think will happen when you are middle aged.”

While the porch is laid back, there are a few rules. You can’t come to porch until your youngest child is driving – after you’re released from carpool duty. Most importantly, there are no expectations. Porch is announced with a simple message sent in their 15-person group text: “Porch is open,” with a reminder that there’s no need to RSVP.

“People shouldn’t feel bad if they can’t make it,” Christy said. You can bring food and drinks or come empty handed. Just come ready to catch up. Some days Christy worries that “this is going to be the night it’s just me on the porch.” However, that’s never the case. Someone always shows up because porch isn’t something to check off your to do list. It’s a weekly escape where you can focus on your friendships.

There are some topics that are off limits: no politics and no religion. Conversation is kept light-hearted: anecdotes from the week, travels and kids. Anything relevant to their personal lives is fair game. On some days, conversation is full of laughter and light moments, while on others it consists of concerns with aging parents and children. The group has each others’ backs through it all.

The porch is also a safe place for people to come with concerns and struggles. “Sometimes someone will show up and just start crying,” Christy says. In that case, the group is there to lift that person up and make them feel better, even if it’s just for the hour. Other nights on the porch are about celebrating accomplishments. In Christy’s words, “it’s a safe place to be excited about accomplishments and be sad when things hurt.”

The porch has strayed from their typical routine by incorporating potluck dinners and road trips and even inviting out-of-town friends who are passing by to come to porch. When Christy’s friend from Baton Rouge was in Houston for her husband’s medical treatment, the group welcomed her with open arms. They all got to meet someone new, and she got a much-needed break from the hospital.

The weekly nights on the porch have become an integral part of these women’s lives, so much so that they, and their families, refer to it as “Porch.” Christy said when she’s had a busy day and is debating whether she should call Porch to order, her husband, Scott Heno, always reminds her that it never fails to lift her spirits.

Porch has also become a fixture for the neighbors. The regular dog-walkers pass by each week and comment when they haven't seen the group in awhile. After Hurricane Harvey, one of the usual couples passed by and saw everyone gathered again and remarked, “All must be right with the world – the ladies are back on the porch!”