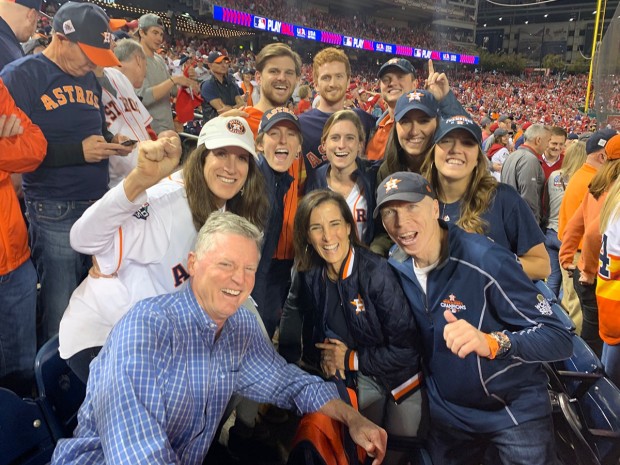 Astros fans have traveled thousands of miles to Yankee Stadium in New York and Nationals Stadium in Washington, D.C. And now, voices hoarse from the chants of “Take it Back” that inevitably commence among groups of Houstonians these days, they are back in Houston and hoping to see their Astros take it back at Houston’s Minute Maid Park. They are energized and ready to bring it back home to Houston’s Minute Maid Park tonight.

“My husband has been an Astros fan since the Astros were formed, me since we moved here in 1978,” says Marcie Zlotnik via text message, while on a plane back to Houston from Washington, D.C. on Monday morning. “We’ll be going to Game 6 and [Game] 7, which I’m confident we won’t need.” 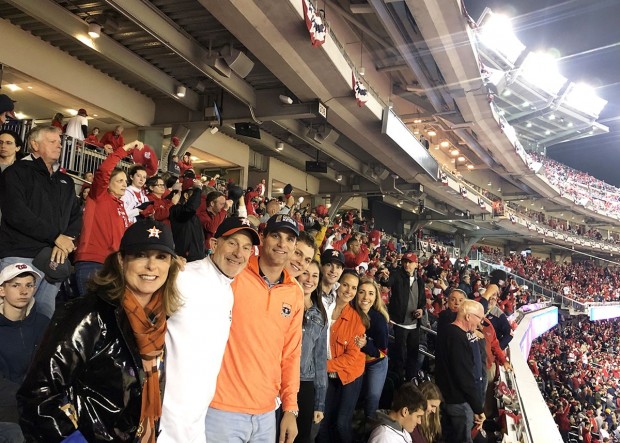 Marcie and her husband Bob are owners of the Sugar Land Skeeters baseball team in Sugar Land, so Marcie says baseball is in their blood. The Zlotniks have attended all home games in the post-season as well as some of the away ALCS games and all of the World Series. And, Marcie might just be bringing good luck to the ‘Stros, too.

She’s got a special orange scarf she wore back in 2017 when the Astros beat the Los Angeles Dodgers in Game 7 of the World Series.

When the Astros didn’t advance to the World Series last year, Marcie thought the scarf’s karma had worn off, and she opted to wear a different scarf during Games 1 and 2. But that was a mistake, she soon realized.

“After Games 1 and 2 losses, when I wore alternate scarves, friends asked me where my lucky scarf was,” Marcie says. She brought it back for games 3 through 5 in D.C. “Needless to say, it’s a bit worn since 2017 but still as magical as ever – three wins in three games.”

Also watching the Astros win on Sunday night were Kate and Steve Gibson along with a whole squad of Houstonians, including Jan Bres and her two daughters Meg and Kate as well as Mike Metz, whose daughter Isabelle graduated from St. John’s School with the Bres girls and the Gibson’s three kids Caroline, Carson and Wheeler. Carson and Caroline along with Meg Bres and Kate Bres took the train down from New York City to make the game, while Wheeler drove up from Charlottesville, Virginia.

“It was a great atmosphere,” says Jan. “We were sitting with a big group of Astros fans behind the dugout. I think they loved having us there and loved hearing cheers instead of boos.” 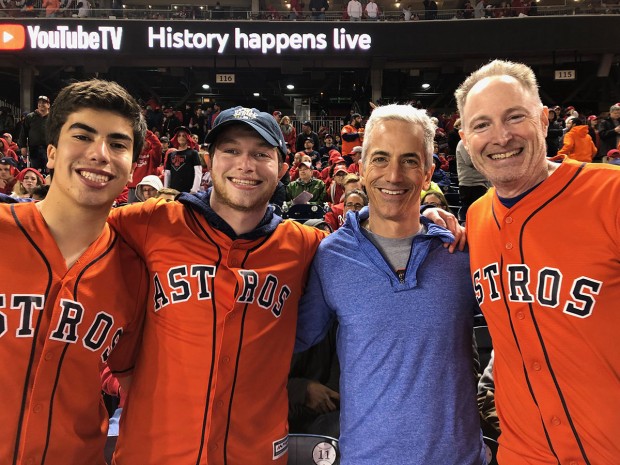 Cory Levit (at left) flew in from Dublin to attend the World Series. Pictured with him are Michael Talisman, Benjy Levit and Charlie Talisman.

Heading to Saturday and Sunday night’s games all the way from Dublin, Ireland was Cory Levit. Cory graduated from Emery High School last year and is now a freshman at Northeastern University, currently studying abroad in Dublin. He attended the games with his dad Benjy Levit and best friend Ethan Samuels, who flew in from Hartford, Connecticut.

Though they won’t be able to make it to Game 6 in Houston, Cory and Ethan are excited to watch the Astros take it back on home turf.

“Over the last two years, Houston has totally become a baseball city,” said Ethan, a freshman at Amherst College. “You see so many people wearing Astros jerseys all throughout the year. I think after [Hurricane] Harvey, it was great we could celebrate, but we didn’t get to [win it] in Houston. Hopefully we can do that in the next couple days.”

Editor’s Note: Game 6 of the World Series takes place Tuesday evening at 7:07 p.m. If necessary, Game 7 will be on Wednesday evening at 7:08 p.m. Read more about Astros fans here. See where to watch the game in Houston here and where to find fun Astros-themed treats around town. 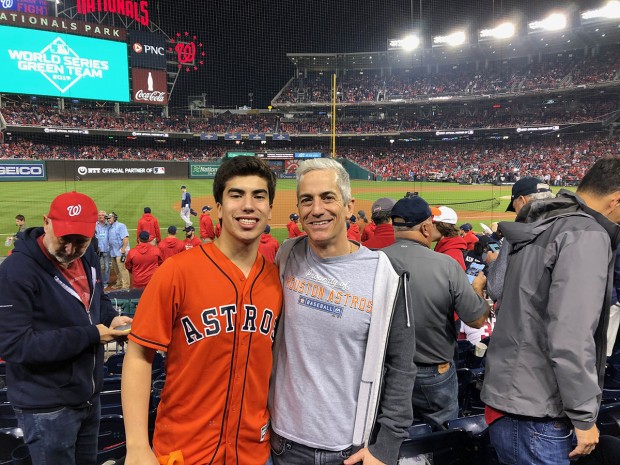 Cory Levit and his dad Benjy Levit watched Games 4 and 5 of the World Series together at Nationals Park. 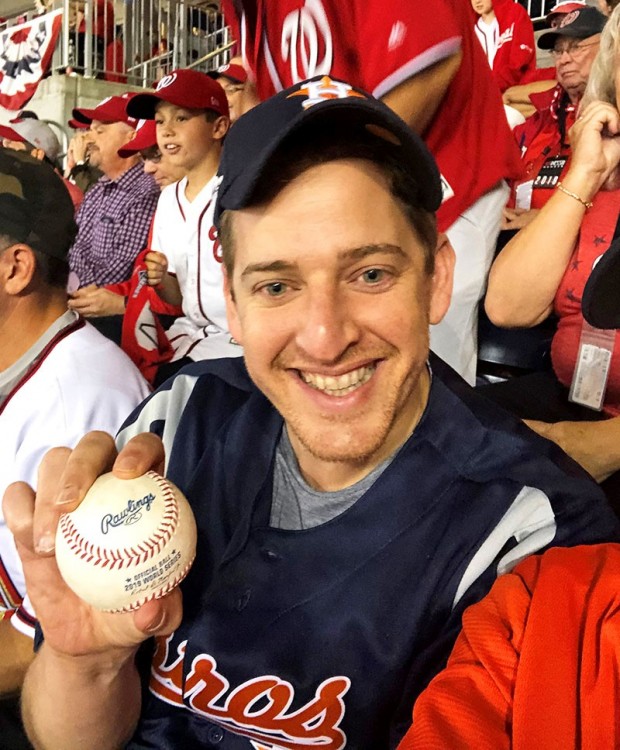 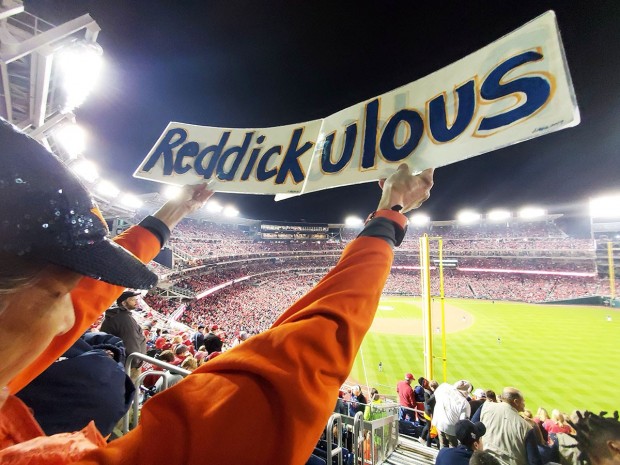 Astros Sign Lady Barbara Moon flew to Washington D.C. with signs supporting each Astros player who came up to bat, including Josh Reddick. 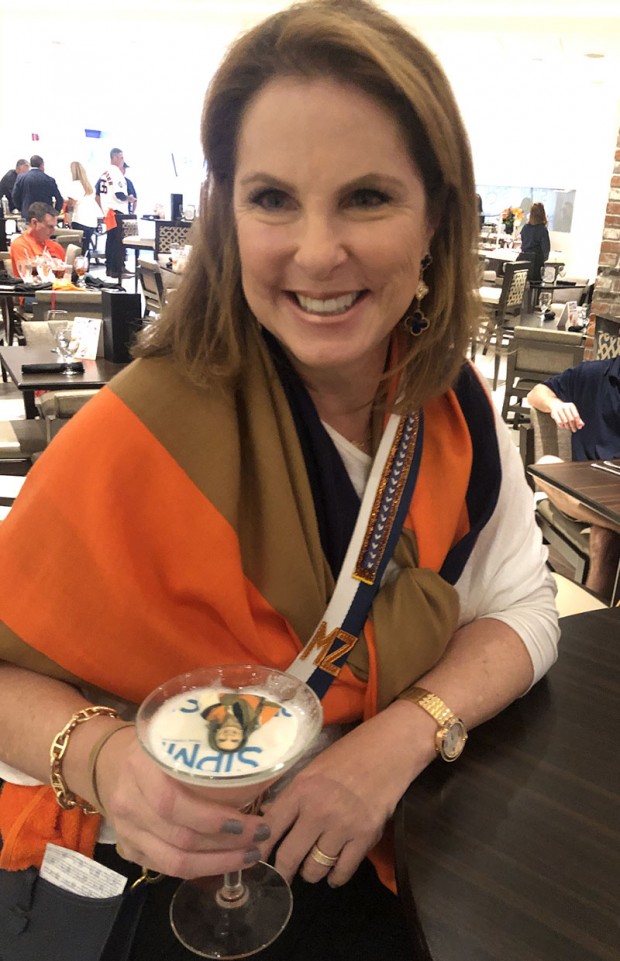 Marcie Zlotnik was not wearing her lucky scarf during game 2 of the World Series. 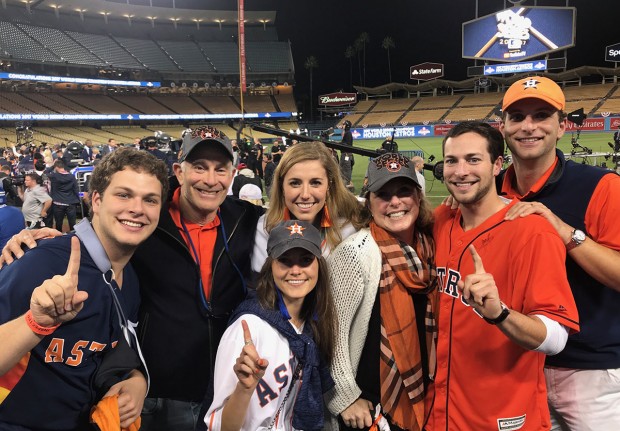 Foundations of a Strong Meditation Practice