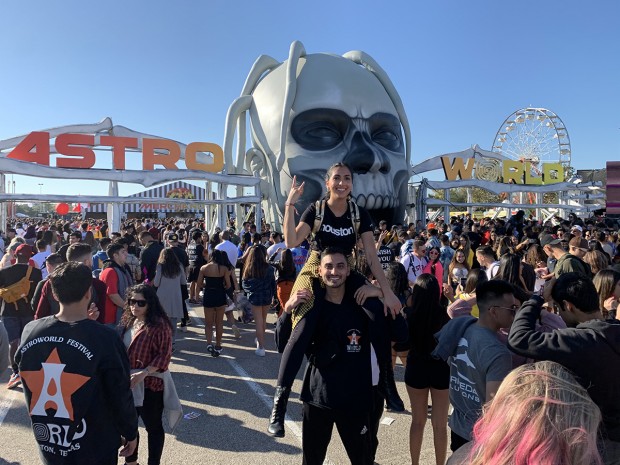 Rupal Mehta attended the festival with her boyfriend Akash Pernankil (pictured here) along with some of her classmates at UT Dallas Business School. (Photo: Taylor Ryan)

At approximately 3:30 p.m. on Saturday, thousands of hip-hop lovers crowded around two stages in NRG Park. The fans ranged from high schoolers, who wore James Harden and Jose Altuve jerseys, to those old enough to remember the glory days of afternoons spent riding AstroWorld rollercoasters. There was even a 1-year-old baby, Aldair Gomez, carried around by his father who donned a 1994 NBA World Champions t-shirt.

“We just didn’t want him to miss it,” said Aldair’s mother Ashley Gomez.

What they didn’t want to miss their 1-year-old to miss was Astroworld, an annual music festival launched last year by native Houston rapper Travis Scott. Travis pays tribute to his hometown in his album ASTROWORLD, which, like the one-day festival, expresses his own nostalgia for the now-defunct amusement park that sat across from the festival grounds. 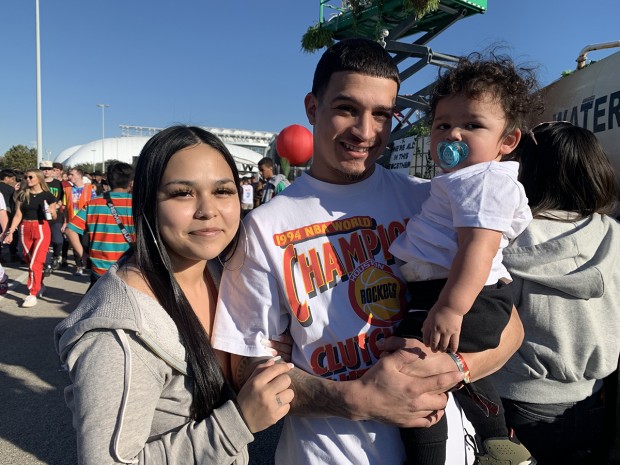 The entire festival experience – from the thoughtfully-curated artist lineup to the roaming performers to the Ferris wheel and amusement park style games – is designed to bring back the wonder of the former AstroWorld, which closed in 2005.

Like other music festivals such as Austin City Limits, attendees spent the afternoon enjoying food and drink from local food trucks, migrating between stages for music acts and, if they dared, joining in on mosh pits. But unlike any other music festival, here, the Houston pride was palpable.

Nearly everyone wore some form of H-town paraphernalia – whether it was a NASA fanny pack, a Houston Astros 2017 World Series hat or a vintage Houston Rockets jersey. Those who weren’t wearing Houston gear – and even those who were – waited in line for up to five hours to purchase merch only available at Astroworld. 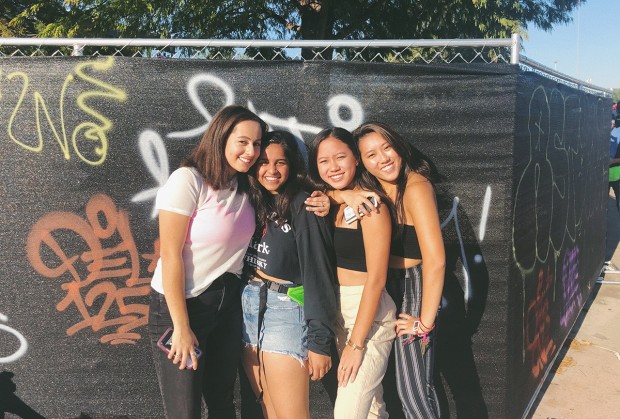 Sukul Mittal, who grew up in Bellaire, attended the festival with her friends (from left) Elizabeth Awad, Leona Chen and Linh Ton.

“I think at most festivals, the merch line takes maybe 30 minutes to get through, but here, people waited three to five hours to buy stuff,” says Sukul Mittal, a St. John’s School graduate and current Rice University student who attended the festival with three friends. “You can’t get this merch anywhere else.” Sukul and her friends managed to get through the line, and each purchased a special Astroworld t-shirt.

Like most of the other roughly 50,000 attendees, Sukul ordered her Astroworld tickets before the music lineup was even released. Travis Scott dropped the lineup to much anticipation only one day before the festival.

“I think the main factor for my friends was the fact that even though they didn’t know the lineup, they knew they’d see Travis Scott and that was worth it,” Sukul said. “Also, we knew the lineup last year was really good, so we knew Travis Scott wouldn’t screw us over.” 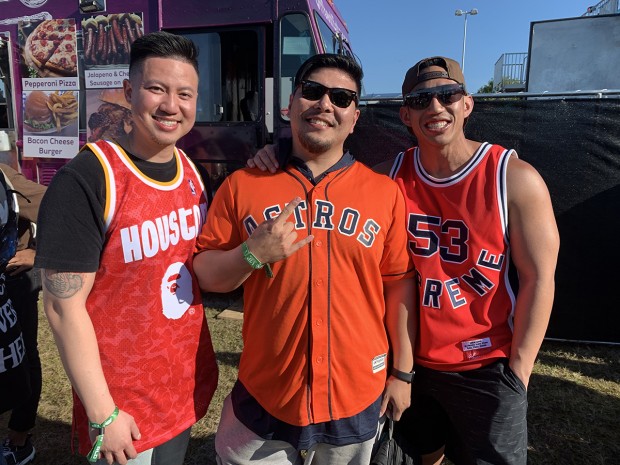 Fans were not disappointed with the performances. The lineup included notable acts like Migos, Latin artist Rosalia, hard rock icon Marilyn Manson and pop star Pharrell Williams. And fans were more than pleased when comedian Dave Chapelle came on for a special onstage surprise introduction of Travis Scott and when, during Scott’s headlining performance, Kanye West took the stage.

Even when there were some snafus, the show went on undeterred.

When the gates opened at noon, floods of fans stampeded through the gates to enter the festival. In the process, at least three people were trampled and sent to Memorial Hermann Hospital with minor leg injuries. The gates remained open, with additional Houston Police Department officers sent to the scene to assist. 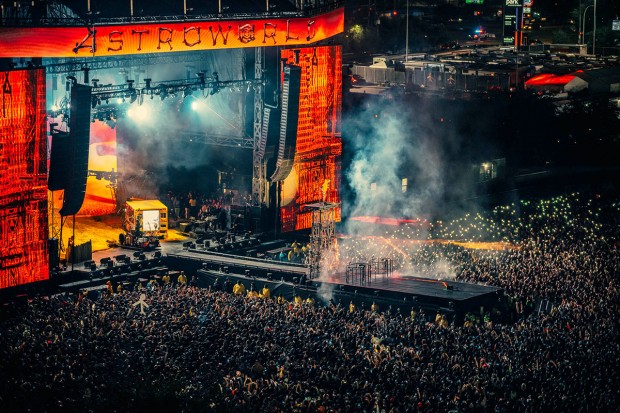 “The energy was so good at the festival,” says Rupal Mehta, who graduated from Bellaire High School and now attends business school at UT Dallas. “Travis really does this for the city and it shows.” 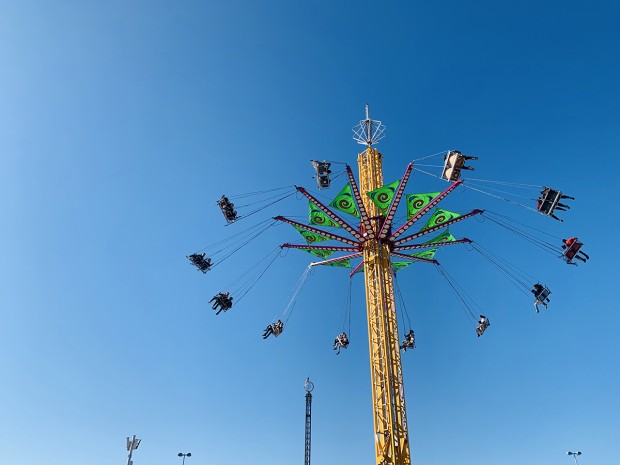 Astroworld is meant to bring back the nostalgia of the namesake amusement park through iconic rides like this one. (Photo: Pooja Salhotra)

Rawand Shamdin (at right) traveled to Houston from Washington D.C. to attend the festival while Amanda Prater (at left) drove from Waco, TX. (Photo: Pooja Salhotra) 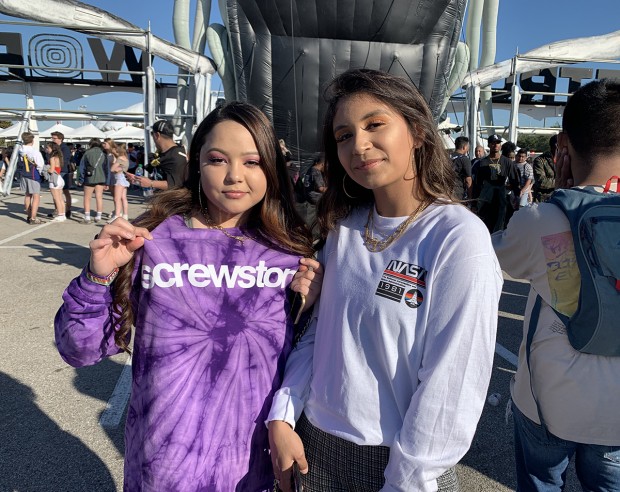 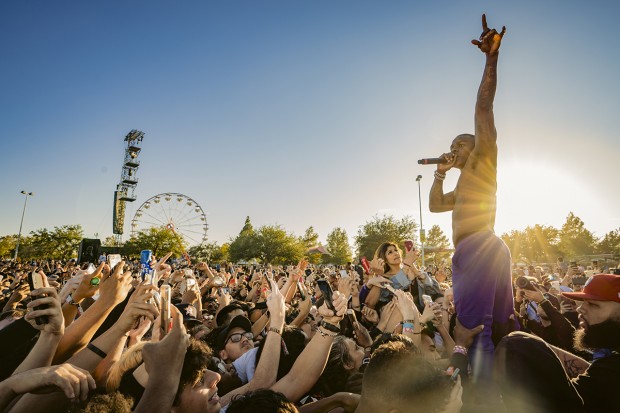