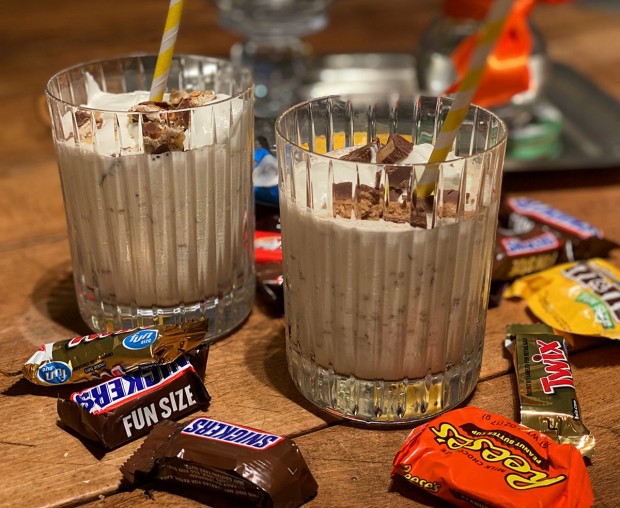 Leftover Halloween candy? Stay on the sugar high and use it to whip up Halloween Candy Milkshakes with Marshmallow Cream.

Friday, the day after Halloween. Today’s column was a toss-up: Something virtuous to make up for last night’s sugar high? Or something that will just keep us rolling with the sugar? Is that really a question? Not surprisingly, sugar wins. Because there are only a few days in the year when most of us have access to this much awesome candy. Let’s make the most of it.

What to do with all that candy? I thought about a Snickers pie, or a Reese’s cake, or M&M ice cream. And then I thought better. Why not turn those leftovers into something totally new and yummy, something that we’re probably not likely to whip up the rest of the year? And I thought of this: Halloween Candy Milkshakes with Marshmallow Cream. Do I need to keep talking?

I will. Halloween Candy Milkshakes are creamy, crunchy, indulgent and totally customizable. Are you a Reese’s guy? Use them up! A Butterfinger girl? Go for it. Can’t decide between Snickers and Milky Ways? Bring them both on. There’s no going wrong here. And we really need to get rid of that leftover Halloween candy, don’t we?

The clincher here is what goes on top of the Halloween Candy Milkshakes: Marshmallow Cream. This is whipped cream heavy and sweet with marshmallow fluff, airy but denser than your average whipped topping. The only bad thing about it is that you probably won’t be able to stop dipping your spoon into the bowl before the milkshakes are ready. I suggest making a double recipe of the Marshmallow Cream. It can’t hurt.

And one more customizing option: If you’re a grown up and you want to make this into a Milkshake No Minors, leave the milk out and substitute with a little Baileys or brandy or whatever booze sounds good to you. Cheers!

In a stand mixer or with a hand-held mixer, beat the heavy cream with the marshmallow fluff until stiff peaks form. Set the whipped marshmallow cream aside.

Put the milk in a blender, then the ice cream. Blend it together, and check the consistency. If you want a thinner shake, add a tiny bit more milk and blend again. Throw two fun-sized candy bars into the blender. Pulse two or three times, just enough to sort of chop up the candy, but not to puree it. Pour the milkshake into a glass, and top with a big dollop of the marshmallow cream and another chopped-up fun-sized candy bar.