Mustang Football and the Playoffs 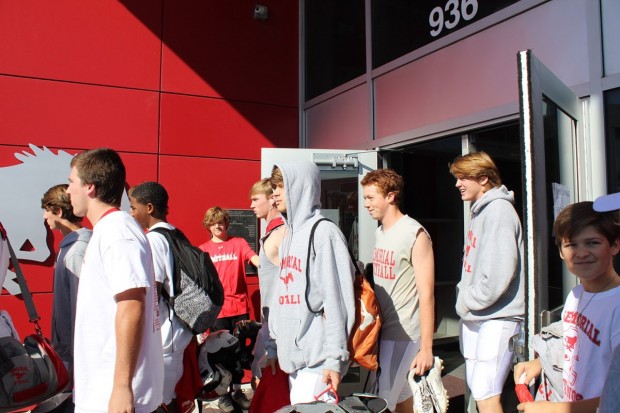 Varsity football players including (pictured) Sean Sheets and Thomas Shavlan exit the field house to board the bus for the second playoff game.

After four years, the Memorial High School Mustang varsity football team made it into the playoffs. This past Saturday, Nov. 25, 2019, students, parents, and athletes spent their first day of Thanksgiving break at Legacy Stadium watching the red and white play their second playoff game against Katy Taylor.

The players were sent off in style as parents, cheerleaders, Markettes, and student spirit groups, the “Sweethearts” and “Bums,” lined the path from the field house to the buses to cheer as the band played the school song. Once the buses were loaded, everyone fled to the bridge over Echo Lane to watch the players pass by. Escorted by the Bunker Hill police, the 'Stangs were on their way to Katy, Texas.

“It was super cool how the whole community was supporting our team during the playoffs,” junior outside linebacker Nathan DeLemos said. 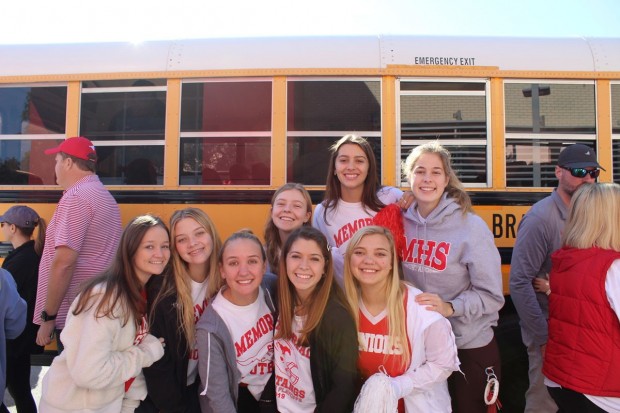 Making playoffs is exciting not just for the players but for all the spirit groups involved, including the cheerleaders, the band, the Markettes, and the color guard, to name just a few.

“It was so cool that we made the playoffs this year, especially since it’s my senior year. I’ll never forget it,” senior band president Rachel Royster said.

The energy was high, and everyone buzzed with excitement as the Memorial Mustangs made their way onto the field at Legacy Stadium, where they would face the Katy Taylor Mustangs.

“Making playoffs was super bonding for our school because we all brought so much spirit to each game because we really wanted to see the team succeed! Overall it was so much fun and brought us so much joy!” Senior Markette Vice President Lauren Biar said. 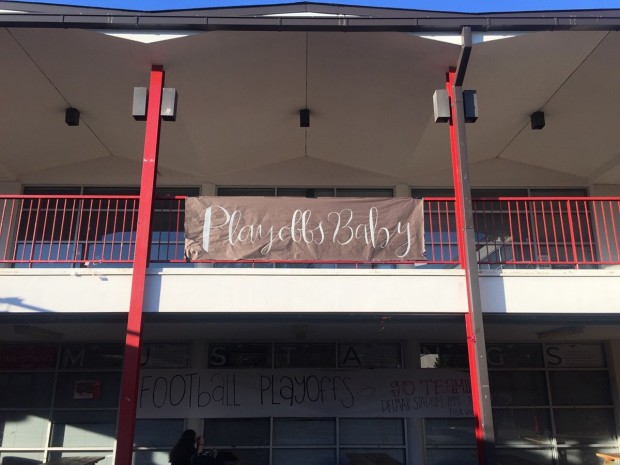 The Mustang Sweetheart spirit group made playoff signs to decorate the school and show school spirit.

During the game, the energy never faltered. With a full student section, a booming band, and an excited team, everyone was up on their feet, savoring every throw, catch, fumble, and tumble.

After a narrow and thrilling game, the Mustangs would end their playoff season with a final score of 14-21, Katy Taylor.

Overall, this year’s Mustang Football team had a great season with lots of “firsts.” They were the first team to make playoffs since 2015 and the first team ever, in Memorial history, to make the playoffs without having a returning playoff veteran. The Mustangs finished their regular season with a 6-4 record claiming 4th place in the district.

Everyone is already excited and hopeful for the next football season, where the Mustangs will prove themselves once again as a great football team and maybe even bring home a championship trophy. 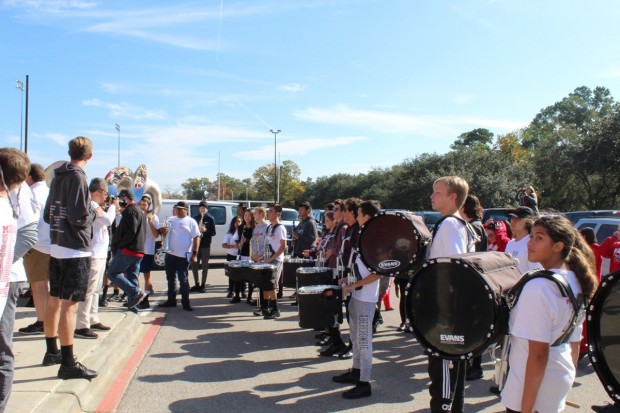 The Memorial band played the school song and fight song for football team. 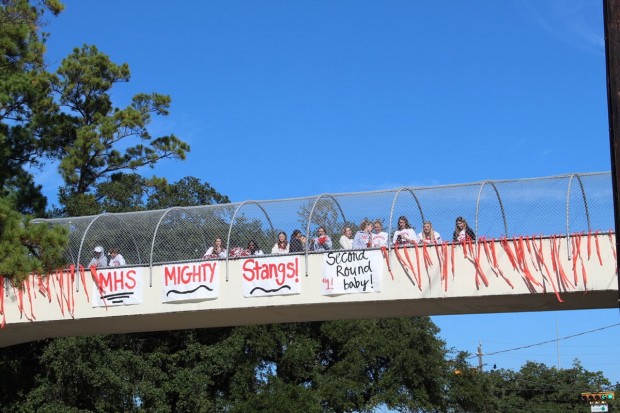 Students lined the bridge over Echo Lane to watch the football buses leave for the game. 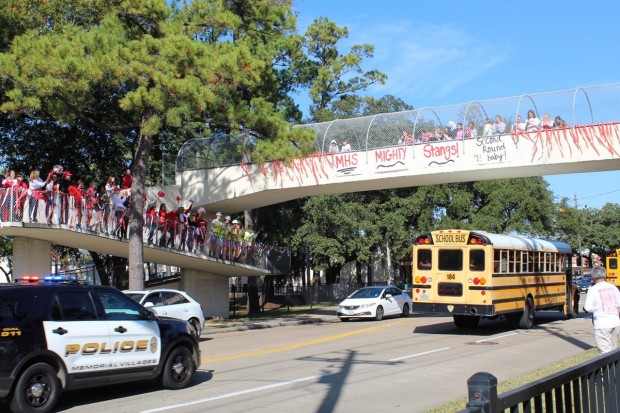 The buses were escorted to the stadium by the Bunker Hill Police. 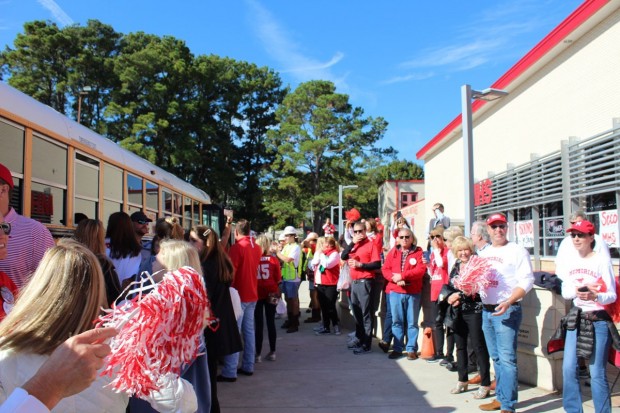 Students, parents, and spirit groups lined the path where the football players would enter the buses. 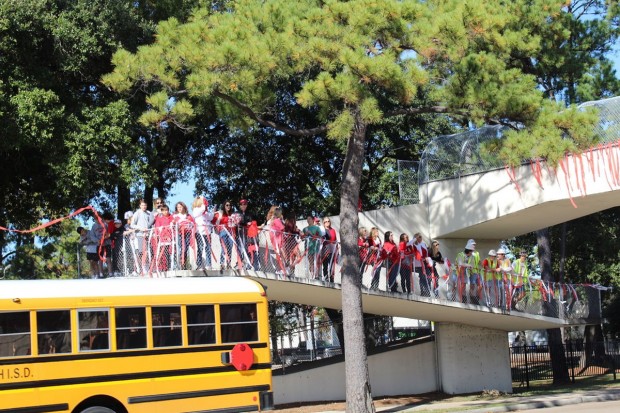 Parents and students line the side of the bridge on Echo to cheer on the players. 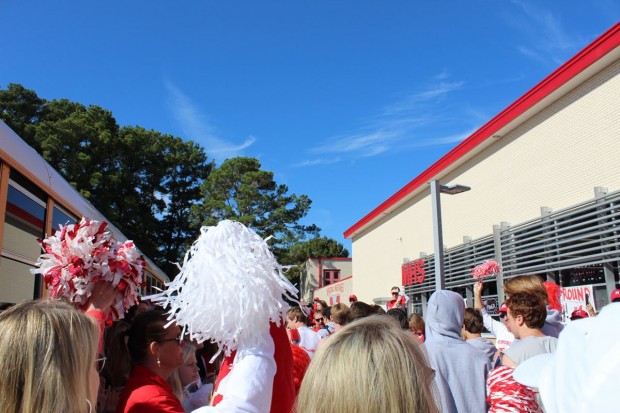 Parents and students lined the way from the field house to the buses cheering on the players.