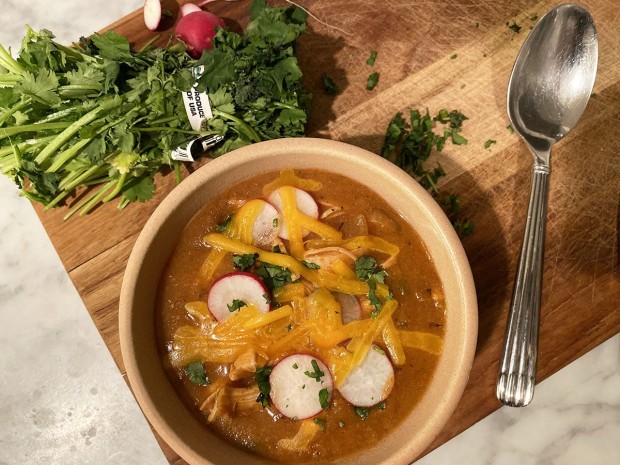 Chicken Tamale Soup is warming, delicious and a great choice for the family in chilly weather.

It’s soup weather! Finally, it’s cold enough to get back to our favorite soups and stews…and maybe even serve them in the evening, when it’s dark early, in front of the fireplace.

This one – Chicken Tamale Soup – is a new idea, incorporating masa as both a thickening agent and as a way to impart the distinct flavor of tamales. It’s craveable, like a tamale, but exponentially healthier. Kind of like a hybrid between the real thing and tortilla soup.

And, Chicken Tamale Soup is easy (whew!). One pot cooks the veggies and the chicken, all together. If you want something that more closely resembles an actual tamale in soup form, add some chopped-up tamales at the end of the cooking time. This will give the soup heft and texture – a super-warming version of tamales.

On the subject of garnishes: I know not everyone loves a radish, but give this garnish a try. The slightly bitter slices add a welcome crunch to an otherwise creamy soup. Cilantro brightens it up (skip if you’re a cilantro hater). And the cheddar cheese over the top will make the soup feel like you’ve just sidled up to your favorite Tex-Mex combo plate. Only you’re cozied up in your own house, hopefully in front of the fireplace.

Recipe directions:
Heat the olive oil in a large soup pot over medium low heat. Add the onion, jalapeño and garlic, and sauté until the vegetables begin to soften and are translucent. Add the cumin, chili powder, oregano and salt, and stir to combine. Add the masa, enchilada sauce and chicken broth, stirring to combine. Stir in the cilantro, and nestle the chicken breasts into the soup. Bring to a boil, then reduce the heat to medium low. Simmer until the chicken is tender, about 45 minutes, stirring occasionally.

Remove the chicken breasts from the soup. With two forks, shred the chicken. Return it to the soup, and simmer for another hour or so, stirring occasionally. Thin with a little extra chicken broth or water if the soup seems too thick.

If you want to take this soup over the top, stir in the tamales about 10 minutes before serving the soup. Either way, serve it topped with sliced radish, chopped cilantro and cheddar cheese.