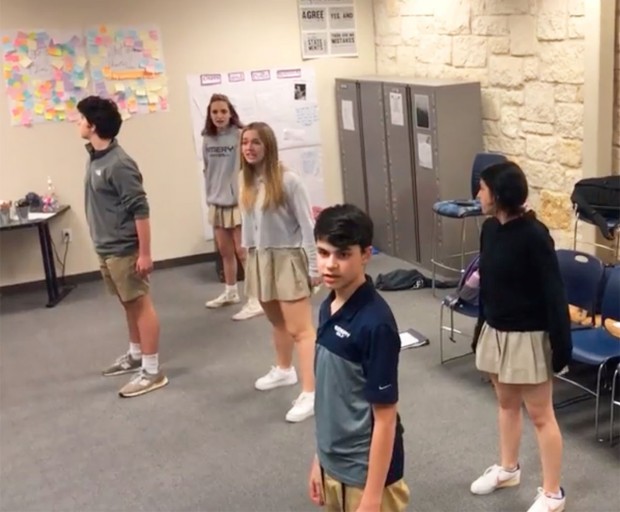 The cast of the Senior Directed Project "Heartbeat" learning their choreography for the song "In" from Carrie the Musical. (Pictured, from left) Maddie Rose, Dovid Adler, Eliana Haas, Morgan Brandt and Casey Markowitz.

Typically, there are two to three shows. A senior can either find a short play already written, create a dance show, write their own play, or create something else. In my sophomore year of high school, I participated in a show that was in the style of a revue. This style means that the cast would sing songs that center around a theme and tell a story. There was also a dance show that year that consisted of three dances, a solo, trio, and group number.

This year, I am in the cast of a show that is closest to a musical. My directors, Claire Lemel and Julia Strug, chose their favorite Broadway songs and wrote a storyline. They then wrote in short scenes between the songs. This process has been so much fun. It was really nice to see my friends create such a compelling and well-developed show while also choreographing group numbers and other songs as well.

Chiara Cohen, a sophomore, says “I have loved being in the Senior Directed Projects so much. Since it was my first year coming into Emery and joining into theater, I was worried about making friends in the department. However, this process was the perfect way to do it. Everyone has been so inclusive and it has been so easy to bond with such a small and friendly cast. I will definitely participate again next year and hopefully direct my own show senior year.”

Our performances are on Dec. 7-8, and we cannot wait to show off what we have been working so hard on.