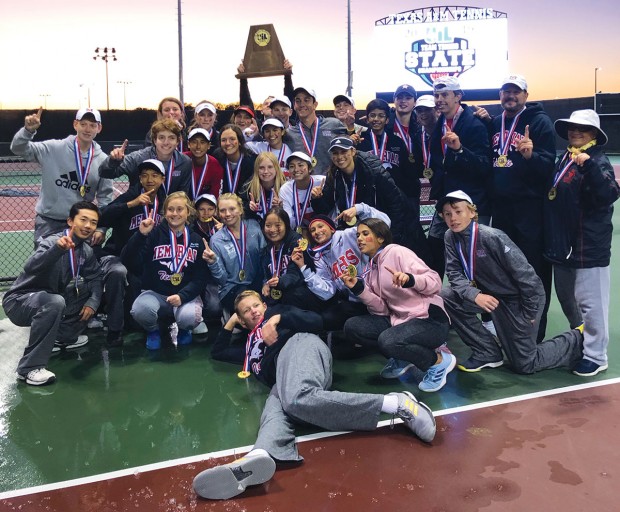 STATE CHAMPS The Memorial Mustangs tennis team won its second UIL 6A state championship in the last three seasons. The Mustangs finished the season with an undefeated 19-0 record.

For the second time in the last three years, the Memorial Mustangs are the Class 6A state champions in team tennis. The Mustangs capped off an undefeated 19-0 season by defeating Southlake Carroll and then Plano West by identical 10-7 scores at the state tournament to win this year’s championship.

“It’s always an amazing experience when you win a state title,” said Mustangs tennis coach Bud Booth. “We came up one win shy last year, so our focus all season was to bring the state trophy back to Memorial. Our kids worked hard and definitely earned the championship.”

On the girls’ side, the Mustangs were led by their No. 1 player, Drew Morris, who went undefeated in singles play the entire season. In addition, the duo of junior Aleksandra Dimitrijevic and freshman Sofia Mazzucato were undefeated both as doubles partners and in singles matches. Also, Booth credited the play of girls’ team captain Kiran Singal, who pulled out a key tiebreaker victory in the state finals.

For the Memorial boys, both Graydon Buckingham and Eric Kuo went undefeated in singles play this season. “Both those guys also played amazing tennis in the playoffs,” said Booth. “Our boys’ captain, Harrison Herzog, also played a huge role for us with his leadership skills and getting the guys ready to go. I’m just extremely proud of our entire team.” 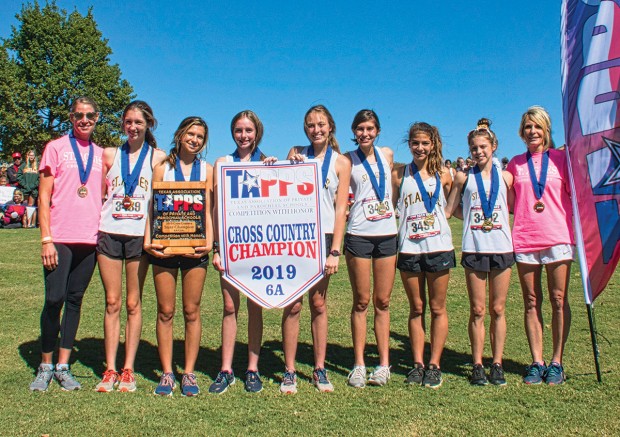 The St. Agnes Academy Tigers continue to pile up state championships, with the most recent state title coming in cross country. The Tigers dominated the TAPPS 6A state cross country meet in Waco with a lofty 64-point margin of victory over second-place Dallas Ursuline Academy. It was the second consecutive state cross country title for St. Agnes. Not surprisingly, most of the St. Agnes runners were also part of the St. Agnes team that won the state championship in track and field this past spring – which marked the Tigers’ fourth straight state track and field title.

“Our girls buy into our program and make cross country and track a priority,” said Tigers head coach Kristi Robbins. “We have large participation, and the depth of our program makes us strong.”

Making this year’s championship all the more special was that it marked the 100th state championship in all sports for St. Agnes. “We knew going in that if we could win this one it would be a major milestone for our school, so that made it all the more rewarding,” added Robbins. 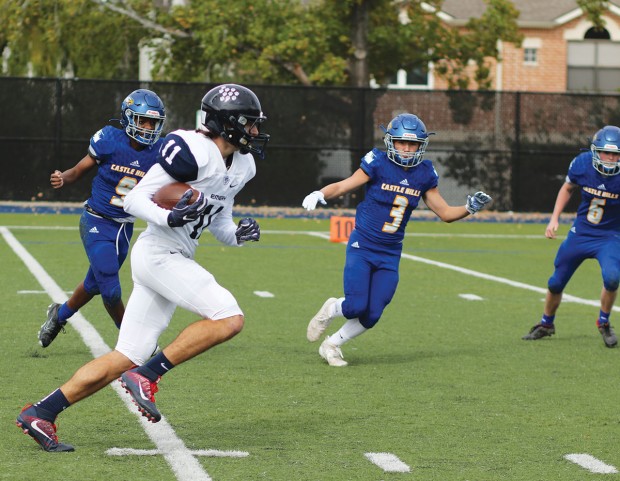 The Emery/Weiner School Jaguars were again a powerhouse program in private-school six-man football this season. With a 9-1 regular-season record, the Jaguars won their TAPPS Division 1 district championship.

“Our guys have done a really good job, especially after losing nine seniors, including four all-state players from last year’s team,” said Jaguars head coach Jason Weimers. “We’ve had a lot of young guys step up. Plus, the biggest thing this year was getting kids who were playing other sports to come out and bolster our depth.”

In a dominant regular season, the Jaguars averaged 50 points a game, with running back and linebacker Austin Smith leading the team in rushing and touchdowns. On defense, Smith’s 50-plus tackles were also tops on the team. Senior tight end Connor Koenig was not only a major receiving target on offense, but also had 37 tackles and four fumble recoveries as a standout defensive lineman. In addition, junior Jack Greenberg added 37 tackles through nine games, while the Jaguars’ top receiver was junior Cullen Baker.

“We’ve been a bit up and down since winning the TAPPS Division 1 state championship in 2015,” said Weimers, “so the kids really focused on buying into the program and making this a great season.”