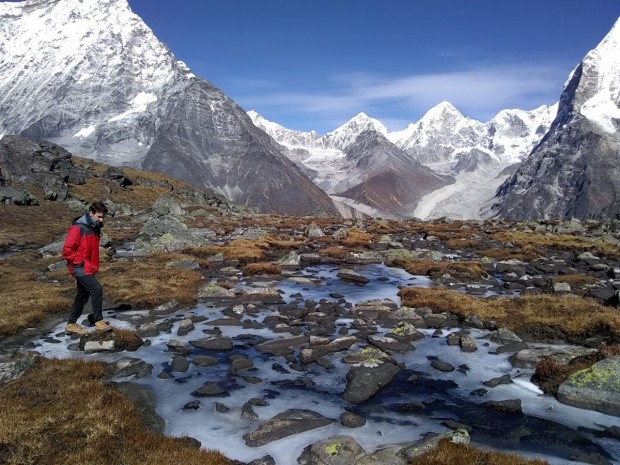 During his time in Nepal, Blake Myers trekked for 16 miles through mountainous, icy regions.

After spending the holiday season at home with family, Blake Myers packed his bags and headed for Bush Intercontinental Airport to catch his flight. These days the airports are full of college-aged kids going back to school for second semester, leaving Mom and Dad behind with a hug and well wishes. But Blake isn’t going to college. Instead, he’s bound for Italy to study Italian, art history and cooking as part of his gap year.

Taking a year off between graduating from high school and enrolling in college, known as a gap year, is becoming increasingly popular. This nontraditional experience is the perfect opportunity for Blake who, after living in Nepal during the fall semester, will spend the next few months living with a former classmate, Luca Cohen, in Florence. 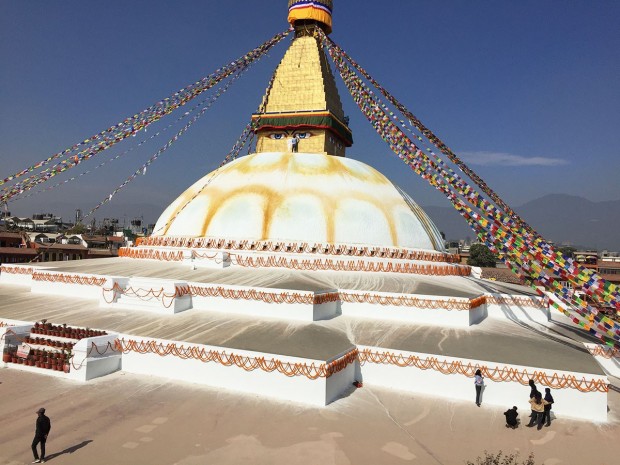 Blake graduated from the Emery/Weiner School and was accepted to colleges, including Boston University, but he decided to put his formal education on hold. “I didn’t feel ready to go back to school again,” he said. Blake’s mom, Lisa, suggested looking into a gap year. She says Blake is an extremely good student and hard worker, but he was worn out and tired of school by the time he graduated. “We would rather buy a year of growing-up time so he can be excited about college than him going and maybe not having a great year,” she said.

He enrolled in the Where There Be Dragons program and traveled to Nepal instead of taking classes during what would have been his fall semester at college. As part of his course itinerary, Blake spent 10 days in a Buddhist monastery where he lived with monks and followed their daily schedule. He also traveled to Mustang, an area high in the mountains that was once part of Tibet, went on a 16-day trek, and visited the birthplace of the Buddha. Blake’s favorite part of the program was staying in the homes of Nepali families, where he was able to truly immerse himself in the culture. 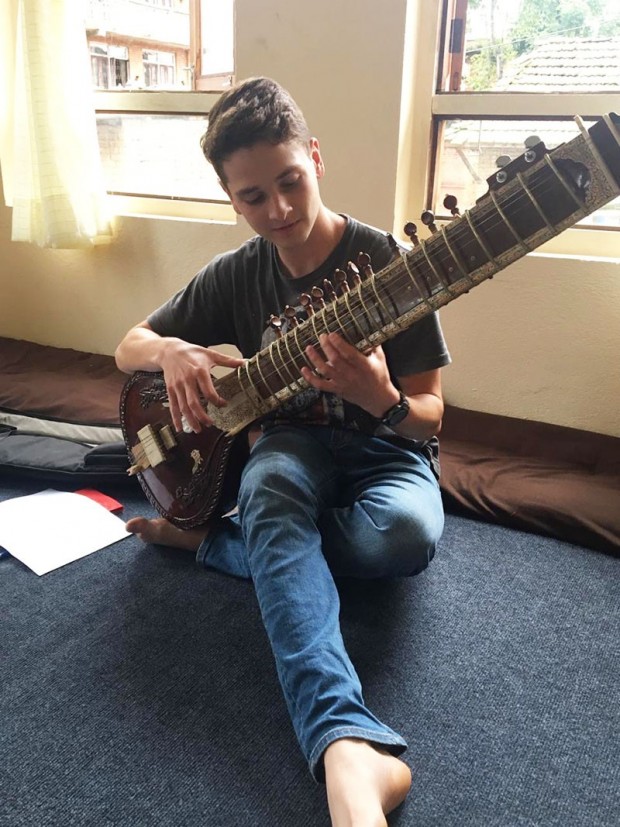 Blake Myers learned to play the sitar, a traditional Indian instrument, as part of his gap year program in Nepal.

Lisa says she is not surprised at all that her son chose such an unusual adventure. “We travel a lot as a family, and Blake always loved it more than the other kids,” she said. Blake spent his junior-year summer in Guatemala, where he became fluent in Spanish, and the experience reinforced his interest in learning about other cultures. “The change in him has been huge. He’s more mature with a broader view and appreciation of things,” Lisa said. “Travel has given him a whole different perspective. Living in Nepal piqued his curiosity to learn more about different Eastern religions, and he’s much more interesting and worldly.” 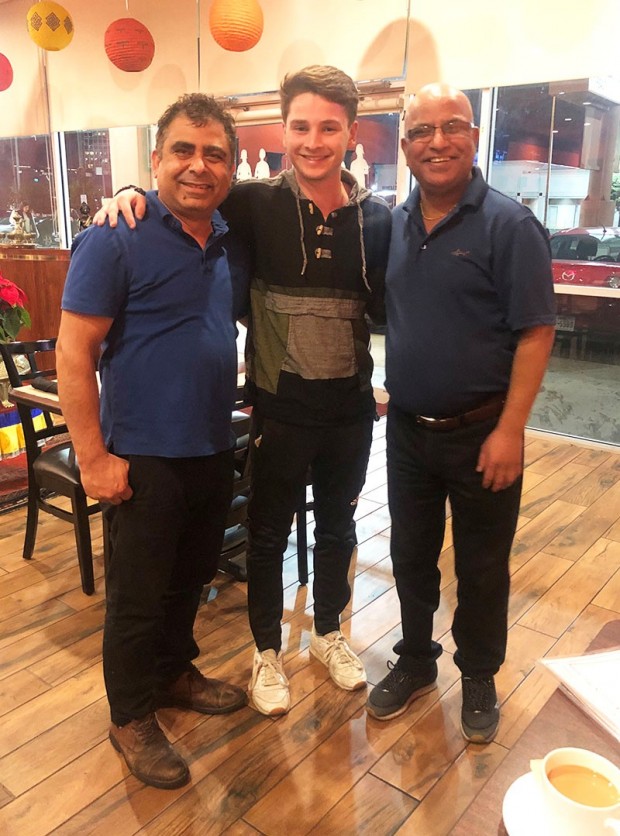 The staff at Kathmandu Curry and Bar loved having Blake in their Nepali restaurant in Houston and learning about his experiences in Nepal.

When Blake arrived home from his time in Nepal, he quickly found himself missing some of the local cuisine. A Google search directed him to Kathmandu Curry and Bar on Hillcroft where he eagerly ordered Dal Bhat, which was one of his favorite dishes. The Nepali waitstaff was both shocked and impressed when Blake flawlessly ordered the traditional meal, made of lentils and rice, in their native language, Nepali.

This fall, Blake will enroll as a freshman at the University of Toronto, armed with a year of knowledge he would not have found in a classroom. He couldn’t be happier about his decision to delay college. “What’s the rush?” he asked. “College is absolutely important, but this is a very unique time in our lives to have these kinds of experiences.” 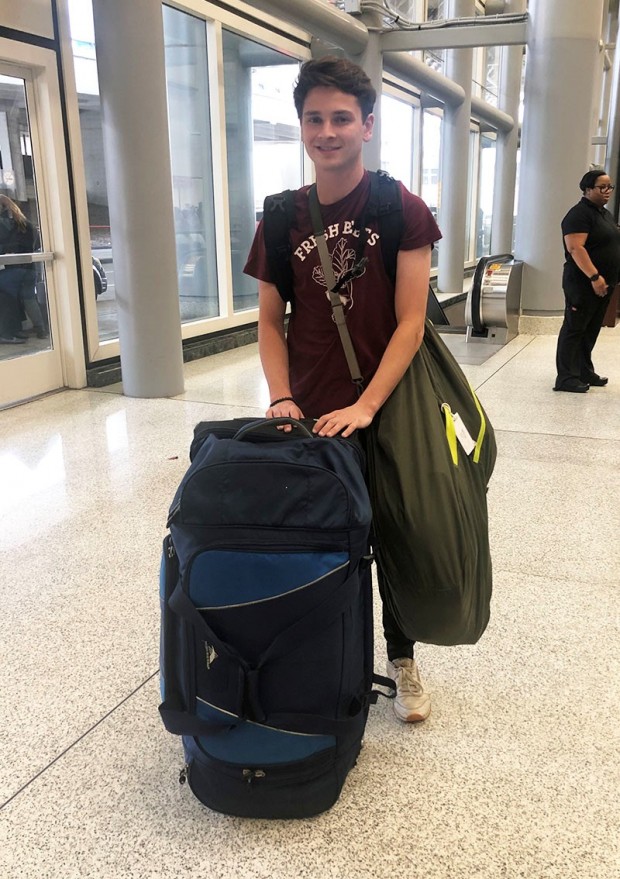 Blake said goodbye to his mom, Lisa, at Intercontinental Airport to board his flight to Italy where he will live with a former classmate, Luca Cohen, in Florence.