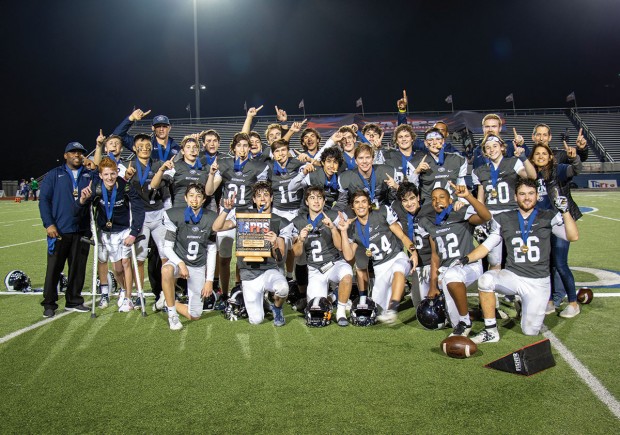 STATE CHAMPS The Emery/Weiner Jaguars captured the TAPPS Division 1 six-man football state championship with a 31-20 victory over Lakehill Preparatory in the state final. The Jaguars finished the season with a 12-1 record.

With its 31-20 victory over Lakehill Preparatory of Dallas, the Emery/Weiner Jaguars secured this year’s TAPPS six-man Division 1 state football championship. The victory also marked the second state title in the last five years for Emery/Weiner.

In the state championship final, the Jaguars were led by a tremendous game from running back Leo Gerst, who rushed for 214 yards and three touchdowns. Quarterback Doran Yustein also connected with tight end Josh Blum on a critical 30-yard, second-half touchdown.

“We had a small but mighty senior class, and those three guys set the tone on and off the field,” said Jaguars head coach Jason Reimers. “The trio of Austin Smith, Ben Dauber and Connor Koenig really led the way in this year’s run to the state finals.”

With its final 12-1 record, the Jaguars also tied a school record for most victories in a season. “I think this year’s championship is a title for the school and the entire community. The fans showed up in droves for our state final in Waco, and it’s an honor to bring the title back to Stella Link,” said Reimers. 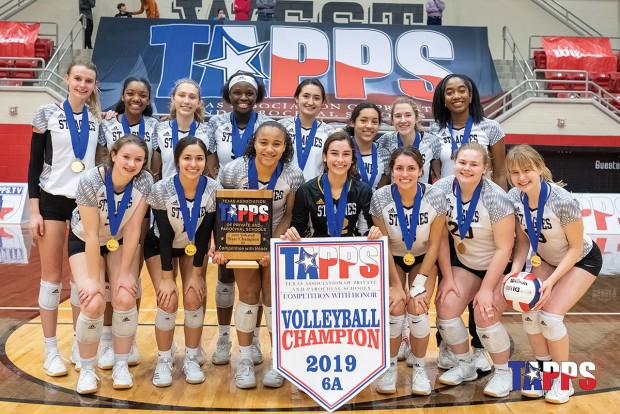 Propelled by an epic comeback victory in the state finals, the St. Agnes Academy Tigers captured the TAPPS 6A state volleyball championship. The Tigers faced six match points while trailing 24-19 in its fourth set versus Prestonwood Christian before rallying for a 27-25 victory. At one point, St. Agnes trailed two sets to nothing prior to its improbable comeback, which was capped off by a 15-13 victory in the fifth and deciding set.

“In those courageous moments you saw the eye of the tiger,” said Tigers head coach Cydryce McMillian. “I watched in awe as our girls battled through an incredible amount of adversity and pressure.” By withstanding that kind of pressure, the Tigers brought home their first state volleyball title in 15 years. “Our seniors kept us focused all season long on what we wanted most, and that was to win the state championship.”

As for those seniors, Tigers outside hitter Sahara Maruska will play collegiate volleyball at Rice while libero Julia Bradshaw will suit up for Pennsylvania next season. McMillian also had high praise for the leadership of fellow seniors Isabella Agee and Audrey Leonard. “All of our girls put in so much effort from day one and had the laser-like vision to win a championship. It was a great victory for the entire St. Agnes community.” 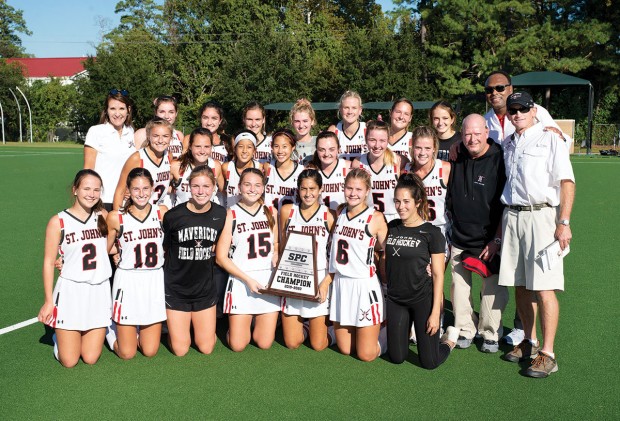 FIELD HOCKEY CHAMPS With a thrilling overtime victory over rival Kinkaid in the SPC title game, the St. John’s Mavericks secured their second straight SPC girls field hockey championship. The victory capped off an 18-2 season for the Mavericks.

In a memorable championship final, the St. John’s Mavericks persevered through two overtime periods and then a 1v1 shootout to defeat the rival Kinkaid Falcons for their second straight SPC girls field hockey title. “It was a high intensity back-and-forth battle,” said Mavericks head coach Craig Chambers. “Both teams slugged it out.”

While neither team scored in regulation and then the two overtime periods, Mavericks senior Sadie McCabe broke the scoring drought with the first goal of the shootout. Senior Kennedy Sholeen and sophomore Sloan Davidson then added two more scores, and goalie Tyler Kennedy kept the shutout intact for the ultimate 3-0 St. John’s victory.

The SPC Championship capped off a magnificent 18-2 season for St. John’s, with its only two losses coming against the country’s top-ranked field hockey teams at the Max National Field Hockey tournament in Pennsylvania. “We won one of our games in Pennsylvania and played really well against the nation’s top-ranked team,” said Chambers. The Mavericks played extremely well all season behind an immensely talented lineup, which included 11 players who’ve committed or already signed to play field hockey at the major collegiate level. 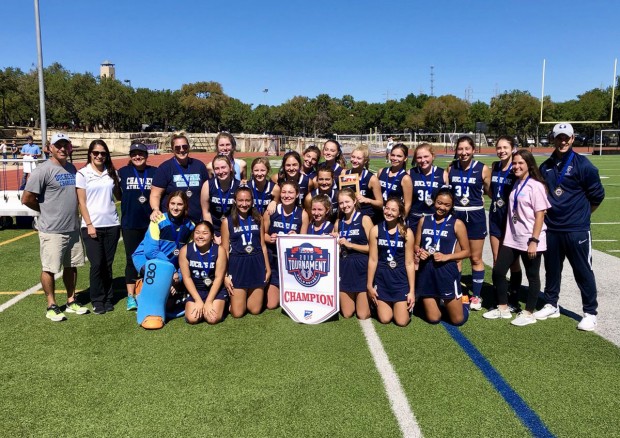 For the second straight year, Duchesne Academy of the Sacred Heart captured the TAPPS 6A state field hockey championship. At the state tournament, the Chargers first defeated rival St. Agnes in a 2-0 overtime thriller, with Cee Cee Van Pelt and Saphia Zaman scoring the only goals of the game. The Chargers then shut out All-Saints Episcopal 1-0 in the state-title game. Ariel Schumacher set up Genna Montalbano for the only goal of the game.

With two magnificent shutouts to her credit, goalie Camille Lobb was named the state tournament MVP.  In addition, the Chargers were led all season by the sensational play of Schumacher, who was only one of four players in the entire state to be named on the Max Field Hockey “Top 40 Players to Watch List.”