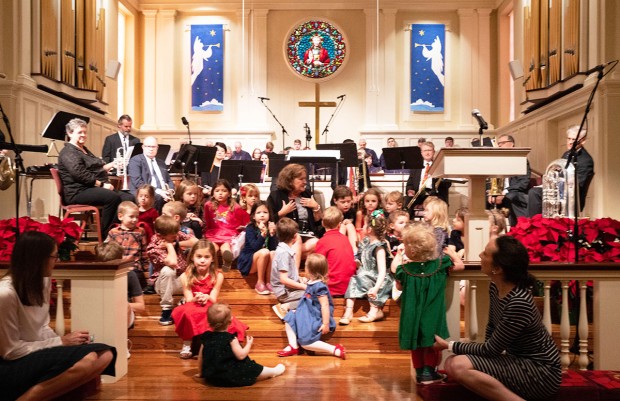 Vicky can keep even the wiggliest of kids captivated during her weekly Children’s Time message.

If you’ve seen peculiar things on the 3600 block of University Ave. - camels walking down the street, baby pools filled with gallons of chocolate pudding, a six-foot hut made out of cereal boxes, 23 dogs, four cats, three guinea pigs wearing dresses, and an earthworm all accompanied by lots of smiling kids - there’s a good likelihood that it was some sort of magic conjured up by Vicky Savage, West University Methodist Children’s Ministry Director.

Recently, West U Methodist members came out in droves to celebrate Vicky, or Ms. Vicky as the kids call her, and her retirement after 36 fun-filled years of service.

Reverend John Collier recalled, “We were looking for a new children’s director and Vicky was one of our preschool teachers. Senior Pastor, Jim McPhail, asked if I thought Vicky would be a good fit. Later that day, I heard lots of noise out on the playground and saw Vicky riding around on a stick horse with her preschool class and I knew she would be the perfect fit.”

Vicky said, “I took the job, but only committed to one year and here I am over 30 years later!” 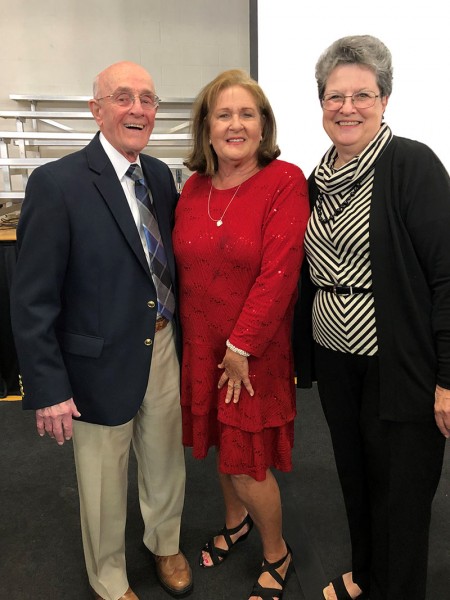 Charlie and Joy Hall been part of the WUMC family even longer than Vicky. Charlie is a retired West U Methodist associate pastor who served for three decades. Both Charlie and wife Joy said they are very thankful for all that Vicky did to make the church such a special place for so many families.

Reverend Charlie Hall said, “Vicky served under nine ministers and constant staff changes. Generations depended on her presence. There is so much planning that makes a great program. Praise God for Ms. Vicky!”

Over the years, church activities and special events included Sunday school, children’s time during church services (you never knew what prop might show up - everything from baby chicks to a dead fish), Blessing of the Backpacks, Parents Night Out in the gym filled with inflatables, food collection and packaging dry pinto beans for Christian Community Service Center, the introduction of fan-favorite games like smash ball and nine square and much more. 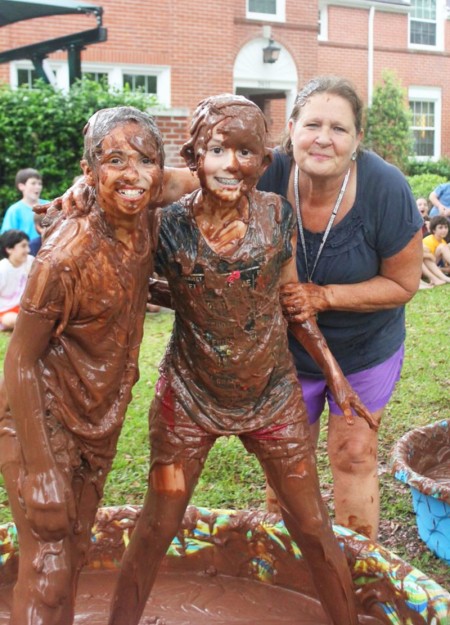 Thankfully Ms. Vicky isn’t as “pudding-ey” as Audrey Leonard and Abigail Shelby during the fifth-grade crossover pudding day ritual on the front lawn of West U Methodist. Not shown are all the empty cans of pudding it took to fill three baby pools.

Vicky provided opportunities for kids to help serve others in the community. The after-school children’s mission clubs handed out quarters at laundromats and passed out frozen turkeys and sides for Thanksgiving dinner as well as collecting and passing out loads of toys at Christmas time at apartment complexes in Gulfton.

Rev. Charlie’s wife, Joy Hall, added, “Vicky was a remarkable ‘little people’ preacher. Vicky was such a blessing teaching the children to serve one another, the senior members of the church and people less fortunate.”

Longtime church members Barbara and Chuck Hale shared how Vicky touched the lives of their three sons, Marty, Andy and especially Brian, now all in their 20s. 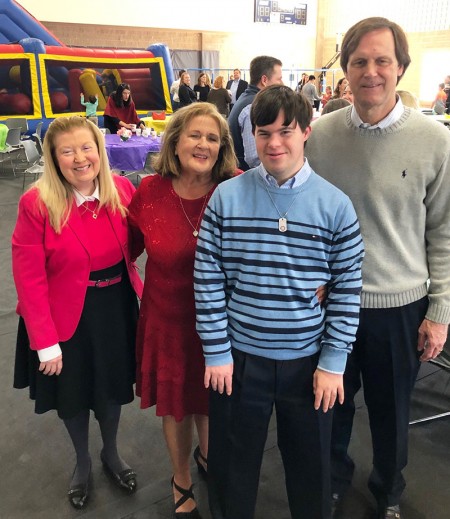 Barbara, Brian and Chuck Hale joined the line of people at Vicky’s celebration to make sure they were able to tell Vicky thank you and get a photo with her.

“Vicky was loved by all three of our children for her care and instruction in the Children’s Ministry,” Barbara said. “We especially appreciate that she was always inclusive of our special-needs son, Brian. Even after Brian moved up to Middle and Senior High Youth Ministry, Vicky continued to support him. For example, every year she would bring the West U Methodist children to cheer for Brian at one of his Challenger baseball games and hand out special treats to all of the Challenger players.”

Lauren and Brandon DeFrehn and their children, Luke, Hunter, Sydney and Kellan, ages 10 and under, joined West U Methodist a few years ago and are part of the current generation of kids that have benefitted from Vicky’s gifts.

Lauren said, “I’ll never forget the first time my kids asked to sit with Vicky in the front pew during worship... I had this brief moment of hurt thinking ‘They don’t want to sit with me?!’ But I quickly saw the beauty in what was happening - my children had found another adult they trusted, that loved them and wanted to share her love of God with them. And Vicky embodied that love.” 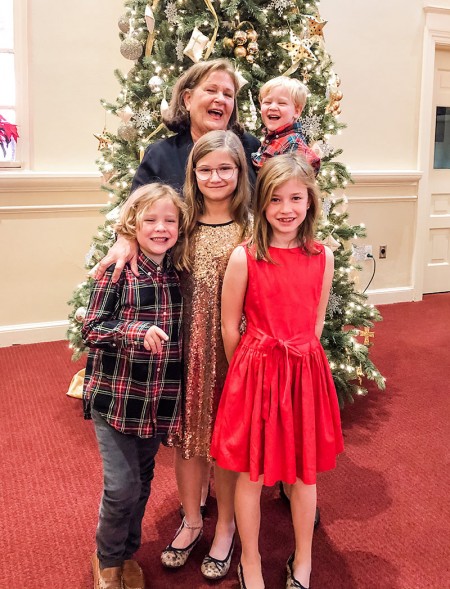 The DeFrehn kids, Hunter, Sydney, Luke and Kellan, are all big fans of Ms. Vicky.

During the celebration, Vicky was asked if she would like to say something and was handed the microphone. The crowd quieted down and as she began to speak, she got a bit choked up “The one word I would say of how I feel is gratitude. I am very grateful.” Then she giggled a bit, “I wouldn’t have stayed so darn long if you all weren’t so nice!”

Then she said she had a confession: “During those Friday Parents Nights Out we sometimes have one of the kids’ favorite desserts called, ‘This Ain’t Your Momma’s Pie’ and I want to share the secret ‘recipe.’”

Sure enough, Ms. Vicky’s loving flock from over the years (many who are now young adults and a few who are even parents themselves) came up to the front of the room during her retirement celebration. They lined up next to Ms. Vicky to get a serving of her famous pie and something even sweeter…a goodbye hug…even if it made them a little bit choked up, too. 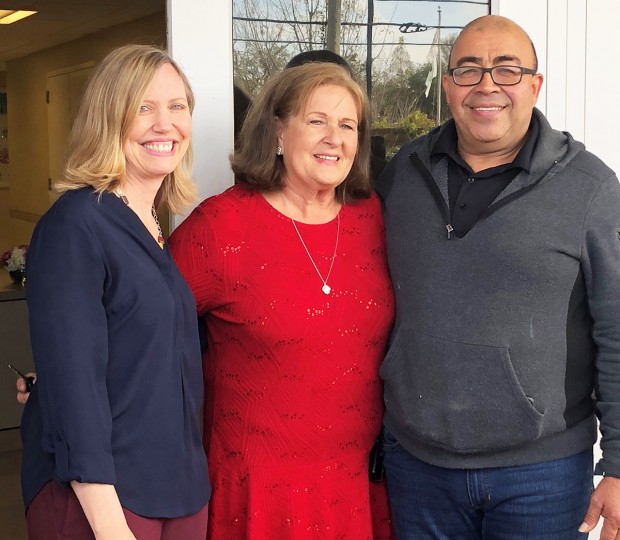 While working together at West University Methodist for more than 25 years, Lynne Jackson (Director of Music Ministry), Vicky Savage (Director of Children’s Ministry) and Jose Espinal (Building Maintenance) have blessed thousands of people. Lynne and Jose will miss their third musketeer. 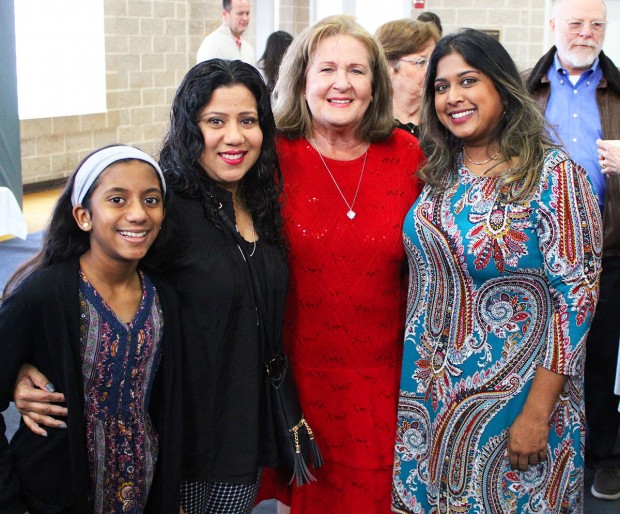 Julia Varkey poses with her mom, Janet, and family friend, Liz Kabir. Julia has enjoyed many of Vicky’s fun activities. 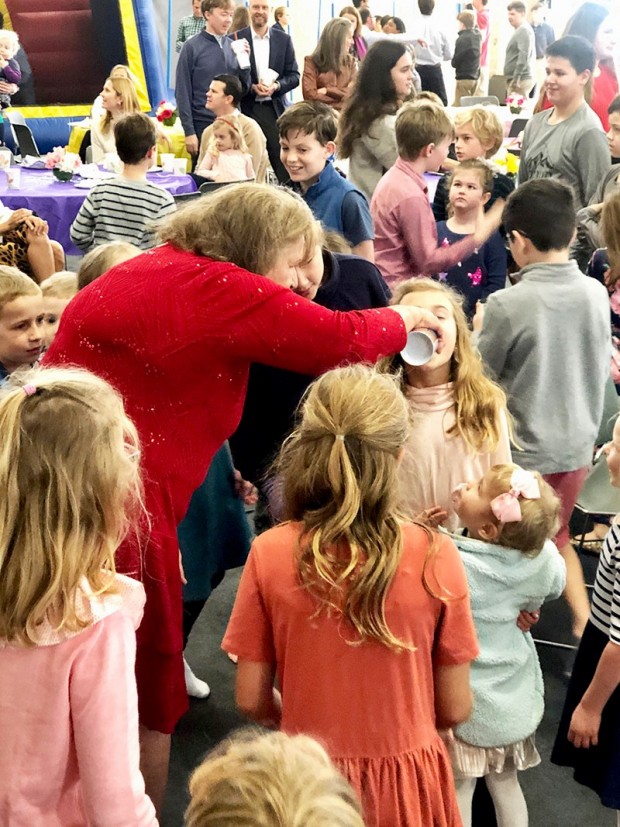 Kids always flock to Ms. Vicky to get a helping of her "This Ain't Your Mama's Pie" which is also known as a shot of whipped cream squirted straight from the nozzle of an aerosol can into happy recipients' mouths. 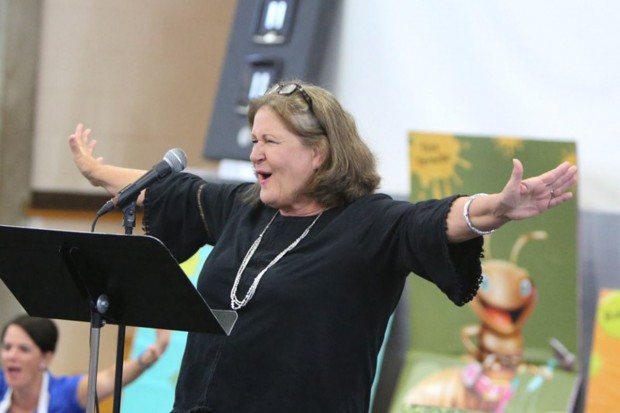 Vicky gets the Vacation Bible School crowd fired up. Every summer, hundreds of children enjoy VBS with a different theme such as Safari, Shipwrecked, Inventions, Bugs, Caves and Heroes.