On and off the horse 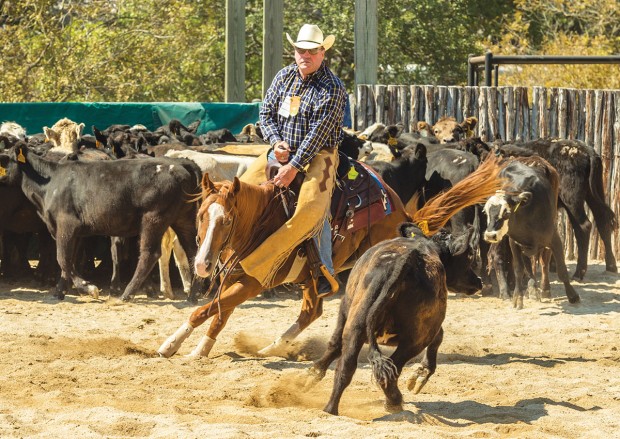 LET’S RIDE Buzz resident Chris Richardson, one of 16 members of the HLSR Executive Committee, cowboys up in 2012 during a cutting competition on the Tejas Vaqueros Trail Ride in Hunt. (Photo: John McCaine)

Dust off the Stetson. Polish the boots. It is time for Houstonians to answer the annual call to rodeo.

For some, that beckoning to go western at the Houston Livestock Show and Rodeo is a more intense duty. These folks with the signature gold badges – among the 35,000 volunteers who literally make the extravaganza possible – are passionate about preserving Texas heritage.

Chris Richardson is well into his fourth decade as an HLSR volunteer.

“I went to my first show in the Dome in 1973,” said Chris, who lives in Memorial and is president of Blazer Building, a construction company. “I went with a couple of friends to see Elvis Presley. I was impressed my friend had this gold badge, and it wasn’t long after that I got involved.”

Since his first post on the Poultry Auction committee, volunteering has been a family affair, along with his wife Anne and their three now-adult children, Christian, Hank and Leslie, who have served on different rodeo committees.

Chris began a steady rise through the volunteer ranks, generating a lengthy resume – officer in charge of the Grand Entry, Lamb and Goat Auction, Rodeo Contestant Hospitality, Sheep and Goat Transportation, and Veterinarian committees. He was elected to the show’s board of directors in 1986 and served as vice president from 2003 to 2005. He landed a spot among elite volunteers as one of 16 members of the HLSR Executive Committee, a position he’s embraced the last eight years.

“It’s been exciting to see the rodeo grow. When I started, there were only about 2,500 volunteers.”

Chris maintains a 1,500-acre cattle and horse ranch near Hempstead, and clearly considers “the cowboy way of life” home away from home.

“I am always thinking about future trends,” said Chris. “I would like to see a lot more scholarships going to those who don’t go to four-year colleges. We need welders, and electricians and plumbers, too. Agriculture Mechanics is one of my favorite events to visit at the rodeo.” (Agricultural Mechanics showcases made-from-scratch projects by students.)

Chris has a unique perspective as a rodeo volunteer since he used to compete on cutting horses. Cutting takes place in the smaller NRG Arena, out of the spotlight of the big rodeo stage at NRG Stadium. But the dramatic dance of a horse commanding the moves of a cow is something to watch.

It’s a passion Richardson shares with fellow Executive Committee member Wesley Sinor, who resides most days with his wife Cassie near the Galleria, but finds equal pleasure on horseback at his Fulshear ranch. Sinor got his start as an HLSR volunteer in 2003, joining the newly formed Gatekeepers Committee. Now the owner of Sinor Engine Company is in his third year on the Executive Committee. As far as competing, he says, it’s the artistry of a gifted cutting horse that sends his heart racing.

“When you put your hand on the horse’s neck and let go of the reins… they do what they’re trained to do, and I was hooked the first time I did it. It’s such a thrill to put all that trust in the horse to perform at a very high level,” said Wesley.

He should know. In 2013, Sinor and his talented mount, Cat Handler, captured the HLSR $15,000 Amateur Class Championship.

Equally, if not more, gratifying for Sinor is the collective good accomplished by his fellow volunteers who, through their donated time and skills, put on the rodeo year after year, allowing the show to become one of the largest educational scholarship providers in the country, with more than 19,000 recipients so far.