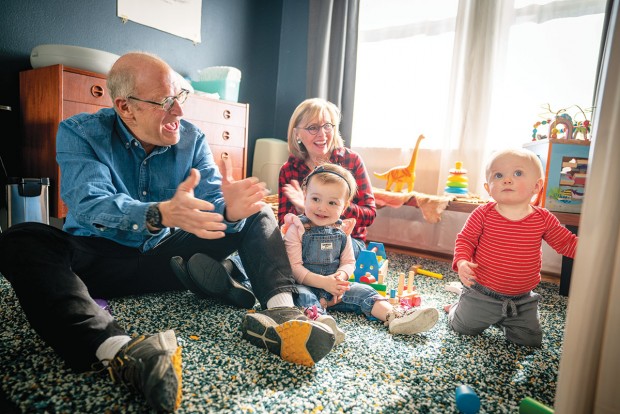 HIS AND HER GRANDKIDS Stan Ehrenkranz, with “his” Arden Evans, and Cindy Gabriel, with “her” Eli Weber, share some togetherness. (Photo: Morgan Weber)

It all seemed so innocent. Six years had gone by since the death of my husband, George. Given the difficulty I had looking for men for my single girlfriends, I had pretty much decided no one was out there. Besides, think of the work it would be to break in someone new.

I had already experienced that with my late husband George. We were married following my divorce from a long marriage. I was in my mid-50s. George was seven years older when we married. Five years later, George suffered a sudden heart attack and was gone following one trip to the emergency room. Did I want to start over again in my 60s?

“All I wanted was a date,” I told myself. I just wanted to look across the table at a man and see if he could put a sentence together.

Last summer, on these pages in The Buzz, I divulged, perhaps too much, online-dating info about getting to know Stan.

Well now, Stan and I know each other a lot better. So, since a surprising number of you asked, here’s the two-year update.

People say we are a perfect match. Perfect, in my opinion, is a flawed word. Stan and I share many of the same imperfections. No one would accuse either of us of being control freaks, attentive to detail, or driven.

Actually, Stan needs to be driven. He can’t go a month without adding a dent to his car. I still throw my clothes on the floor like a teenager. Our glasses, phones and wallets constantly elude us. We are both easily distracted, and for good reason. Life keeps unfolding in ways we didn’t plan.

There’s a new young woman in Stan’s life, and she’s a beauty. She’s Arden-the-Adorable, who needs no makeup, born to his daughter Jenny. In the past year he has been slipping over to meet up with Arden, taking in her first infant year, in the middle of his work day.

I don’t mind. I have a little fellow myself, Eli-the-Guy. These two smiling, wide-eyed wonders came along four months apart from each other, making Stan and I each first-time grandparents. With two grown millennials apiece, plus significant others, plus Arden and Eli, the family dynamics have reached Brady Bunch proportions.

Not to mention Stan’s three fascinating sisters who all live in Houston with their spouses and two kids apiece in various places. The number of gatherings for birthdays alone has doubled my social life and tripled my calorie intake. Then there’s Rosh Hashanah, Yom Kippur, Passover and Hanukkah, weddings and showers, in which I am graciously included.

Yes, they are Jewish. Yes, I am not. Stan loves being Jewish. I love that about him.

“They are a big, loud, huggy family,” observed my daughter Julia, after attending a Yom Kippur gathering called break-fast. It was my second year to attend, and finally Julia and baby Eli were available to come.

She liked the vibe so much that she persuaded Morgan, her husband, to join in for the annual evening Thanksgiving gathering at Stan’s sister Aimee’s house.

“Nothing forced,” I told myself. There are very likable people on both sides of our families. We just need to give them time to figure it out on their own.

Each of the three Stan sisters hosts at least one holiday gathering a year, always infused with millennial-cousin energy. Some fly in from out of state. They tease and joust with each other, like the little kids they remember being together not so long ago.

Pardon me if this is presumptuous, but I love that Eli gets to experience this slice of the world by proxy. It melted my heart at Eli’s first birthday when he spotted Arden amid the crowd of kids and reached out to hug her.

“He doesn’t even hug me,” said mom Julia.  (Welcome to motherhood, Julia. That’s why you get a card once a year.)

We babysat them together about three times in the past year. When one daughter asks us, we tend to invite the other.

All of this wonderfulness is exhausting. It has greatly impeded my ability to sit on the sofa with the TV remote and sulk.

I had to buy some me time someplace. So I did the responsible thing. I quit my job. OK, I retired, an age-appropriate move, I supposed, at 65. Stan says he’s not retired, just tired.

That’s a joke. I had to buy an extra 40 hours a week just to try to match his energy level. Joking is an important ingredient in our relationship. He laughs when I introduce myself as his future ex-wife, though we aren’t married.

Yes, the work of merging and blending the collective 12 decades of life is underway. Yes, it’s sometimes daunting.

The easy part is being with Stan. That part is not work at all. It’s, in its own way, kinda perfect.