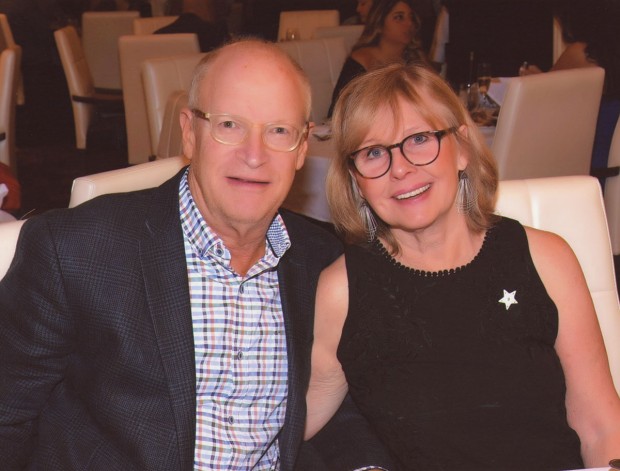 HER FIRST CRUISE Stan and Cindy get a “great deal” on this Royal Caribbean picture package.

OK, I know the world is falling apart. But I’ve been retired for only two months, and I’m on my first cruise ever. I’m afraid my definition of “problem” is that the acupuncture spa treatment I signed up for isn’t happening.

A young woman at the spa entrance met me with the news that the acupuncturist was sick and couldn’t make it. Since I didn’t like that answer at the door, I went to the front desk to see if I would somehow hear a different story. And I did.

The desk attendant said the acupuncturist missed her connecting flight and, thus, the ship. I don’t think my motives were entirely pure when I suggested that she coordinate her story with the person at the entrance.

She skillfully laughed it off and maneuvered me into a massage special of the day, where I learned from the masseuse that the acupuncturist just flat quit without notice. Now that I believe.

I believed her so much that I’m now the proud owner of a jar of rock salt and a brush for my dry skin for only $107. As a first-time cruiser, I am learning that I am saving all kinds of money. I’m not sure how. I didn’t go on a cruise to do math.

First they tell you the cost of something. Then they tell you the Special. But then there is the one extra thing you absolutely must have, for just a little more. Then, you just give them your “Sea Pass,” your magic ticket to anywhere on the ship.

It’s even a vacation for your money. Right?

I actually wouldn’t be on a cruise at all if it weren’t for Houstonians-turned-Galvestonians Barbara Canetti and Jan Malone, their husbands and a group of their “much older” friends from all over Texas, many turning 70 this year.

You know us by our flashing star lapel pins, more than 70 people in all. Cruises are great for getting a bunch of people together in one place, as these much more seasoned travelers can attest.

Plus the flashing stars are a great conversation starter with the other cruisers who ask what they mean. I like what Keith Flatch from Boerne answered, “We’re a cult.”

Did you know there are people who actually cruise six months out of the year in three-month increments? That’s too much pleasure for me.

I need to feel a tad tortured for life to have meaning. At this point, I don’t think listening to the Macarena half a dozen times a day counts.

I don’t mean to make this out as an experience lacking in cultural enrichment. Our tour guide to Progreso on the Yucatán Peninsula was extremely well informed about the Mayan culture for a guy named Super Mario. He teaches geography in my language. Where is the Yucatán?

Hold your left hand, straight up with fingers together. That’s Mexico. The tips of your fingers would be the U.S. border. Your thumb sticking out would be the Yucatán.

The excursion led us on underwater dives into cathedral-like caves of stalactites rich with perfectly clear mineral water from years of rain deposits that slipped through openings to the sky. These magnificent structures, called cenotes, were thought to be sacred by the Mayans. I would agree.

Unfortunately, all that was sacred to the Mayans didn’t quite jive with the Catholic conquerors, so only fragments of this culture remain. That, of course, only makes me more curious.

There are over 6,000 cenotes in Mexico. More than a third of those are in the Yucatán, including on private property.

Maybe in my retirement I’ll become a Mayan expert. But, likely, I won’t.

If I don’t make up my mind, someone else will. I’ve already been asked to consider serving on a board for those with Attention Deficit Disorder. The truth. Do they know something?

Back to the cruise. It’s now that bittersweet time when the blue water is turning more greenish brown.

That means it’s tipping time. Not the 14 percent tip we are charged daily for our expenditures. This kind involves real cash. This one, I don’t resent.

Some of the most interesting people on the cruise can hardly stop and talk. I cannot go outside my cabin without coming back to my clothes refolded and the bed remade like new.

They not only serve you meals, they offer to cut your food. They work 10 or more hours a day, seven days a week, for 6 to 8 months straight.

We met young adults from Indonesia, the Philippines, India, China and Poland. They have my profound respect. I won’t act so entitled the next time the acupuncturist just flat quits.

Now, I want my own house in the Yucatán with my own private cenote.