Ode to an Astros Sweater

With a bit of a Nationals perspective 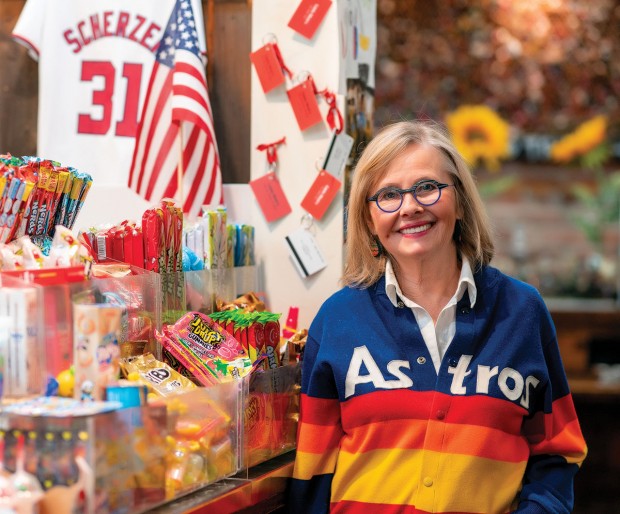 BEFORE KATE WORE IT The sweater – and Cindy Gabriel – next to the Max Scherzer jersey at Little Matt’s in West University, where the Washington Nationals partied after winning the World Series. (Photo: Julia Weber)

It takes a lot to make me feel ambivalent about my Astros sweater. For years – make that decades – I was the only person I knew who had one.

Long before Kate Upton was born, when Houston was still a two-newspaper town, when City Hall had a press room right behind Council chambers, I was among about half a dozen reporters who worked there full time.

It was the early ’80s. One evening, after the dust settled for the day, Tom Kennedy, then a reporter with the former Houston Post (who was also an avid baseball card trader), heard from a source that a single Astros team sweater from the mid ’70s was up for sale. It was probably turned in by a former player.

I was the only one still left in the press room to hear this. The price was high for me at the time, $89. I went with my gut and wrote a check that night, then waited to get my prize in the mail.

Stepping out in it was always an experience. It didn’t matter if the Astros were winning or losing, it had a Nolan Ryan glow about it. People would stop me and ask about it, determined to get one for themselves. Some would warn me to be careful in the parking lot.

In 1986, when Mike Scott pitched a thrilling no-hitter, setting up the Astros for the playoffs, Houston was in a frenzy. I was wearing it on a sidewalk near Kirby where cars were lining up to get into the Astrodome. Someone offered to pay me $500 cash, on the spot.

After that era, if the Astros weren’t deep in the playoffs, it didn’t get cold enough to get out a sweater. It took the post-season play of Altuve, Springer, Correa and the gang to bring it out.

I’ve read several conflicting accounts about the history of this sweater, based on the unofficial fuzzy memories of those around back then. But Channel 2 producer Erica Young managed to sleuth out a few details, which she posted in October at Click2Houston.com. It was apparently designed for players, particularly the pitchers, back in the mid ’70s to combat the cold Astrodome air conditioning. Nolan Ryan was photographed in it a lot.

But it is the 2017 image of supermodel Kate Upton on the field with superpitcher Justin Verlander that finally gave this sweater the recognition it deserves. Astros fans wanted that sweater, instantly. Shops responded, and suddenly I was no longer the only one with this sweater.

The bar was full of millennials clearly rooting for the Nationals. They seemed totally unfazed by an old lady in an Astros sweater. But that was another era, Astros, B.C. (Before Caught). I have no intention of testing those waters anytime soon.

Being in a crowd rooting for the Nationals, I had to see their appeal. What’s not to like about an underdog team who came from nowhere, with Baby Shark as their theme song and a pitcher with one blue eye and one brown eye?

Since Trash Can-Gate, my sweater started looking like something on a sale rack at a discount store. Perhaps it will regain its former luster. It’s a process.

Recently, over burgers at Little Matt’s, with Cindy Lillard and her daughter Allison Parker, I heard a way-inside baseball story that gave me even more of a Nationals perspective.

It was my first time to see Little Matt’s since Cindy and Bill Lillard took over ownership last year. What caught my eye was a small dry erase board next to the counter with a list of names on it. It turned out to be the batting order of the Nationals the night they won the World Series.

Allison’s husband, Taylor, is tight friends with Nationals pitcher Matt Scherzer (the guy with one blue and one brown eye). Taylor played baseball with Matt at the University of Missouri.

As Scherzer’s invited guests for Game 7 of the World Series, the Parkers found themselves in Nationals gear, on Minute Maid Field, celebrating their buddy Scherzer’s win over their Astros.

“We are always Astros fans, unless they play the Nationals, then we are Matt fans,” says Allison.

The Parkers went along with the team as they moved their partying from Minute Maid Park to the hotel. But 2 a.m. curfew rules threatened to shorten the party. So, the Lillards opened the doors of Little Matt’s to the whole Nationals team. Allison says everyone piled in, players, wives, managers, etc. for an impromptu celebration that apparently lasted until daylight. The dry erase board remains as evidence. Go in and see for yourself.

I’m happy for them. But this is a new year. It's all been said. I’m rooting for the 2020 Astros. I’m betting that this year, the Houston Astros are the cleanest team in baseball.

Can’t say that for my sweater. I’ve been afraid to take it to the cleaners for years. If ever there were a safe time, it’s now.