Virtual Reality. Weightlifting Club. Fishing Invasive Species in Houston. Origami Club. Arabic Cultural Club. These are just a few of the 70 clubs and activities offered at Awty. There is a club for nearly every interest or passion and, if there isn’t one, students can always easily start their own club with a teacher sponsor and a goal in mind. Awty ensures each club is active and not just an empty resume booster. With this in mind, one of the most impactful and popular clubs within the Awty community is the One Sky Club.

The One Sky Club at Awty is one of the chapters under the One Sky international organization. The founder of the club decided to keep the same name for the club so the connection to the organization is clear and if anyone is curious about the club, they can look it up online. The One Sky organization’s mission is to provide care and education to at-risk children in China, Vietnam, and Mongolia.

r the Awty specific chapter, its mission is to raise $1,680 every year to fund the sponsorship it has for two children under the care of the One Sky organization. Henderson Chandler, a junior and the current president of the One Sky Club at Awty, has been involved in the club for three years so far. He caught interest in the club in eighth grade because its weekly meetings were held in one of the classes he had daily. When he started to join clubs at the club fair during his freshman year, he joined One Sky Club and felt “the decision was natural.” Since then, Henderson has grown from a regular club member to the competent leader he is today.

As president, Henderson takes responsibility for “arranging meetings, planning bake sales, and overseeing bigger events.” One of the bigger events that has definitely made its mark on Awty is One Sky’s annual Rose Sale. Awty’s homecoming week in November falls around the same time as China’s Singles Day, making it the perfect time for students to buy roses for their friends, favorite teachers, or significant other. Every year, there are also some mysterious anonymous roses delivered! This year’s One Sky Rose Sale turned out to be extremely successful, with 900 roses compared to the 450 sold last year.

Fundraisers such as the Rose Sale always go towards the children the Awty One Sky Chapter sponsors. For Henderson, he believes the most rewarding part of his involvement in One Sky is seeing the “direct change” the club makes. The One Sky organization has “community outreach personnel who act as correspondents between representative school chapters” and every few months will send a “field report through email on how our sponsor children are doing.” This direct communication and connection enable the One Sky club members to actually see the impact of their actions and feel the peace that comes with seeing these happy kids.

As for future goals, Henderson wishes to incorporate “more creativity than the hackneyed bake sales that students see so often.” Since the Awty chapter has been able to exceed its pledge to the One Sky organization for the past three years, the club can dedicate more time and effort towards thinking of “fresh and unique ideas.” I asked Henderson if he had any specific ideas in mind and he was willing to give me the inside scoop! Henderson hopes to have a “food truck day where the entire high school pays for lunch from food trucks that we invite to school.” The food trucks could then give One Sky a percentage of their earnings.

One Sky is just one of the diverse range of clubs and activities Awty students can participate in. There are many other clubs that are chapters under national or international organizations such as GirlsUp and Student World Affairs Club. There are also more “informal” clubs geared towards fun hobbies like Bridge Club and Tea Club. Either way, the clubs at Awty are meant to make a difference, no matter how big or how small. Whatever piques your interest, we have it! 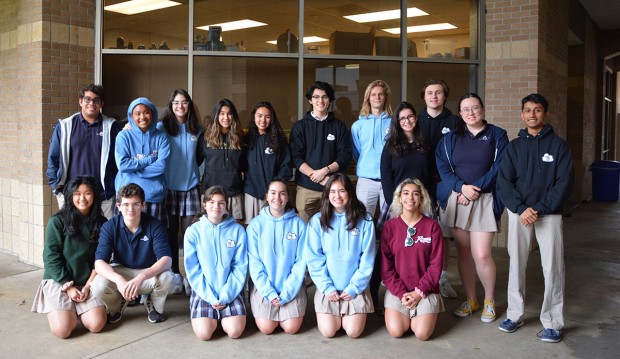 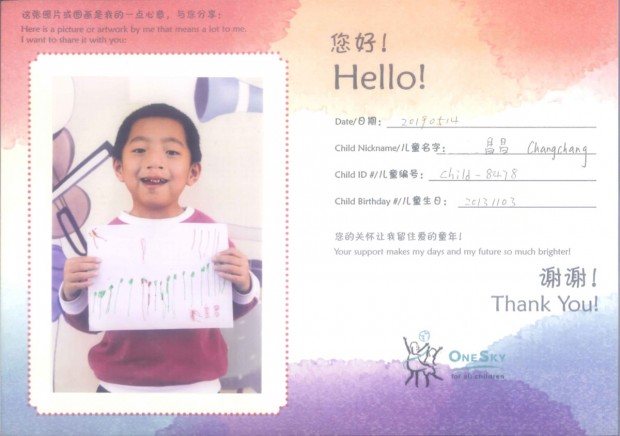 Chang Chang, One Sky's sponsored orphan from China, smiles as he holds his own piece of artwork.