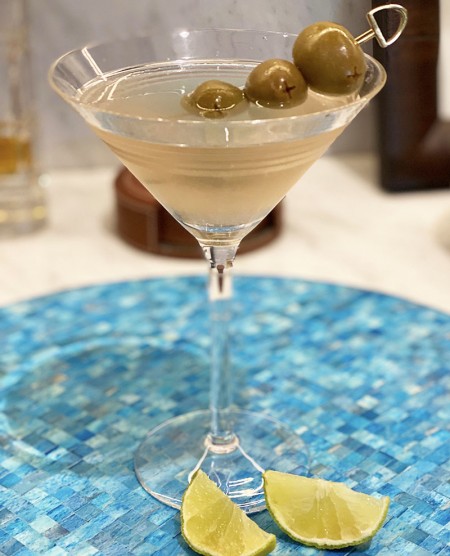 We all know those martini purists. Shaken, stirred, dirty, dry, up, neat, with a twist – everyone has their preference. But here’s a new twist (unintended pun) on the old classic: the Mexican Martini. This is what you need tonight as you celebrate Cinco de Mayo.

The original Mexican Martini, as far as we know, started at Austin’s Cedar Door, a bar that’s been an outdoor favorite since the ‘80s. For anyone who went to school or lived in Austin at some point, you probably have some good memories of their patio. The bar says their Mexican Martinis are widely copied and world-famous. That may be true, but it’s not helpful when you live in Houston and they don’t give out the recipe for their “secret martini mix.”

Bellaire resident Lisa Myers wasn’t going to let that stop her. She enjoyed the Cedar Door Mexican Martini so much that she decided to figure out how to make her own. “The Mexican Martinis at the Cedar Door in Austin are fantastic,” she says. Here in Houston, though, she says, “This is good enough for me.” Lisa describes the drinks as “unbelievably strong,” but she says everybody enjoys them when she and her husband Jeff make them.

Lisa’s version calls for jalapeño-infused tequila. She says you can buy it at Spec’s, or you can make your own: just put sliced jalapeños in a bottle of tequila, or in a decanter, as Lisa does, and leave it alone. “The next time you use it the tequila will be spicy,” she says.

Tonight, for Cinco de Mayo, take the party to your lawn and celebrate. Just be warned: both spicy and strong, Mexican Martinis are not for the faint of heart.

Pour all ingredients except the olives into a shaker filled with ice. Shake vigorously for 10 seconds. Strain the drink into a chilled martini glass, and garnish with the olives on a cocktail spear.